Then invites them to 30 Seconds to Mars concert

“How old do you think I am?” asked Jared Leto on Wednesday while making small talk with a group of Austin youth in foster care or who have been adopted. “Fifty-three!” shouted one. Another guessed “Fifty-two!” The 46-year-old actor/musician grimaced then chuckled, changing the subject to music. 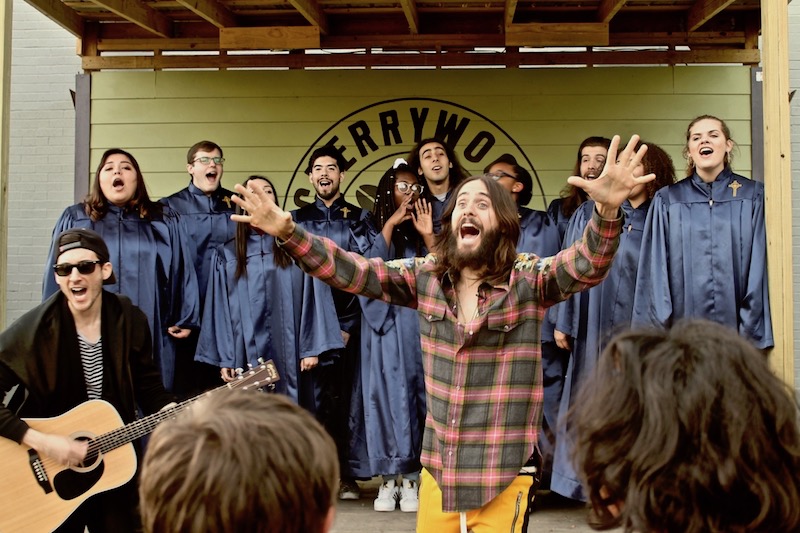 Jared Leto, backed by an acoustic guitarist and choir, singing with local youths involved with Kids in a New Groove at Cherrywood Coffeehouse, 4.4.18 (Photo by Kevin Curtin)

Leto’s team sought out Kids in a New Groove, a local nonprofit providing free music lessons, mentorship, and instruments to children and teens in foster care, group facilities, or adopted homes. The Academy Award-winning actor is on a short promotional tour for his band 30 Seconds to Mars that included an impromptu concert yesterday at the “I love you so much” wall on South Congress. Afterward, he headed over to Cherrywood Coffeehouse with a video crew for a private performance and lesson with Kids in a New Groove mentees.

“If I can sing this song, anybody can,” Leto told the kids as he began an acoustic, choir-outfitted version of the 30 Seconds to Mars single “Walk on Water.” He started by humming the melody for them, then taught the group the big chorus, which only contains a dozen words, including “whoa-whoa.”

Jared Leto teaching children from Kids in a New Groove “Walk on Water” at Cherrywood Coffeeshop. He also invited them all to 30 seconds From Mars’ Austin show in July. Kids in a New Groove provides free music mentorship for youngsters who are adopted or living in group home facilities.

Throughout the song, Leto gave evryone fist bumps and high fives, after which they shook with glee and grinned ear to ear. Later, he engaged them with questions.

“What instrument do you play?” he asked one boy.

“Oh, my brother plays drums in my band,” affirmed Leto. “So my whole life I’ve had to put up with that banging!”

Speaking of his band, the currently-bearded celebrity informed his audience that 30 Seconds to Mars are appearing at Circuit of the Americas on July 7.

“Okay, would you like to come up onstage and jump around with us, and then we’ll sing you ‘Happy Birthday’?”

He accepted and Leto followed up by inviting all the Kids in a New Groove participants to the show.

Kids in a New Groove is always looking for volunteers and donations for instruments. Consider getting involved.

The AggreGAYtor: August 22
What happened today in gay? Here’s your QILTBAG recap of queer news.

The AggreGAYtor: November 1
What happened today in gay? Here’s your QILTBAG recap of queer news.