The Blackheart, a musician’s oasis in the increasingly upscale Rainey Street district, will close at the end of April, co-owner Jeremy Murray confirmed on Monday. He had been trying to obtain a lease renewal for months, but to no avail, and finally learned that another ownership group had acquired it. The Blackheart opened March 2012 with a rowdy, packed performance from Austin’s Not in the Face. Since then, the venue’s existed as the only consistent and quality live music venue on Rainey, hosting local, national, and international acts both on its intimate indoor stage and via the larger bandstand overlooking the back patio.

The dimly lit whiskey bar, the home Austin weighmaster Augustus Basnett built for his family in 1889, has remained the chief steward of live entertainment on the strip. A large percentage of the employees are musicians, including general manager Matt Rade of instrumental heavies Eagle Claw and sound engineer Winston Barrett, a member of Megafauna and resident band Big Britches. The venue also released a Live at the Blackheart vinyl series in 2014 featuring house favorites Mrs. Glass and Sweet Spirit.

Murray, meanwhile, could often be found as a fixture at City Council and Music Commission meetings, fighting to keep live music on the patio as condos cropped up all around his bar. He says presenting nightly live music wasn’t a calculated concept.

“It was what me and Matt [Rade] knew, just how we operated,” he offered. “We always took an artist-first and industry-first kind of perspective because those are our friends and who we wanted to hang out and work with.”

Murray, who also owns Webberville Road bar Kitty Cohen's and is a founding partner of Proof & Cooper near Spicewood, reveals that he’s seen the TABC listing for the new group that’s unseating his business and it’s called Goodmates LLC. Industry sources tell “Playback” that partnership includes owners of nearby Lucille.

Murray says he’s working on future projects that may pick up where the current business left off, but doesn’t expect that he’ll reopen the Blackheart in a new location. He and booker Samantha Phelps are planning a closing blowout April 27-29 featuring Blackheart’s favorite resident bands.

In a mere decade, Rainey’s transformation has been remarkable, turning a strip of houses into a crowded district of bungalow bars. Now, the competitive real estate that’s emerged there has ousted the street’s most relevant purveyors of Austin live music culture. 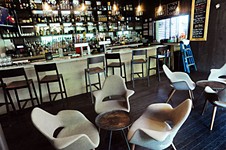