Standing onstage in front of a packed Long Center on Sunday, Bill Murray fumbled a stack of paper that floated down from his podium. The pianist responded with a swing melody, then in came the cello with a blistering, out-of-tempo rendition of “Flight of the Bumblebee.” 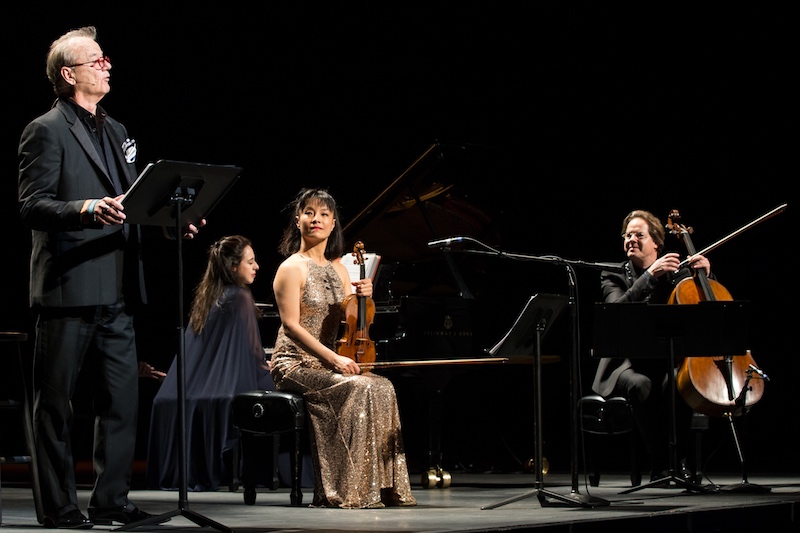 Courtesy of the Long Center/Photo by Suzanne Cordeiro

The actor stumbled toward the piano with a glass of brown liquor that had materialized in his hand.

“The piano has been drinking, not me,” slurred Murray, out a tune.

He’d had a busy South by Southwest.

The Bill Murray Stories, a documentary about his spontaneous encounters with strangers, premiered at SXSW, which also found him belting out the Lawrence Ferlinghetti poem “Dog” on the steps of the Driskill, and apparently falling asleep during the Q&A for the festival’s Wes Anderson premiere Isle of Dogs. Late Sunday night, he was seen two-stepping at the White Horse.

Earlier in the evening, however, he held court at the Long Center alongside a trio of classical musicians. The set varied wildly, from the aforementioned Tom Waits cover to several readings of Ernest Hemingway and a version of George Gershwin’s “It Ain't Necessarily So” from Porgy & Bess. For an actor known to commandeer the bar at Shangri-la and pass out tequila shots, the performance was surprisingly reserved.

For starters, there was almost no stage banter. The readings scored a few laughs, most notably on another alcohol-themed song – a reading of James Thurber’s “If Grant Had Been Drinking at Appomattox” – but overall his delivery was far from comedic. The tone mimicked his karaoke performance of Roxy Music’s “More Than This” from Lost in Translation – somber, but full-throated.

This wasn’t a joke, it seemed. He took it very seriously. And that felt appropriate given the caliber of his collaborators.

German cellist Jan Volger has been a virtuoso since his teenage years in the Eighties, as has his wife, violinist Mira Wang. Venezuelan pianist Vanessa Perez rounded out the ensemble. Together, they played stop-on-a-dime jazz, tight as a drum and engaging enough to keep the audience’s attention when Murray stepped off-stage between readings.

The musicians excelled, but let's be honest, the crowd showed up for Murray. People associate so strongly with the actor, 67, because he’s evolved from everyman to elder with equal parts irreverence and wisdom. Easy to assume that a recitation of Walt Whitman would descend into parody, but he demonstrated nothing but respect for the source material and it kept the audience enthralled for a full 105 minutes and earned an absurd number of standing ovations during a series of encores.

Although the audience might have been surprised by the heaviness of poems like Billy Collins’ “Forgetfulness” and a poignant dedication to recent bombing victim Draylen Mason (himself a bass cello player), Peter Venkman emerged during the last encore. He walked through the audience handing out a bouquet of bright roses, which began as a classy gesture but snowballed into a party as he hurled flowers into the balcony.

The main attraction gracefully exited the stage during the fifth standing ovation, likely to head to the bathroom, where he just might’ve snuck up behind someone, covered their eyes, and whispered, “They'll never believe you.”