“My name is Ivy Sole and tonight I’m reppin’ Philly.” So announced the rapper astride Dirty Sixth on Monday night. The self-identified “Charlotte-born and raised, Philly-made” MC then put on a lightning 20-minute set that would have made the City of Brotherly Love hoot with iron pride. 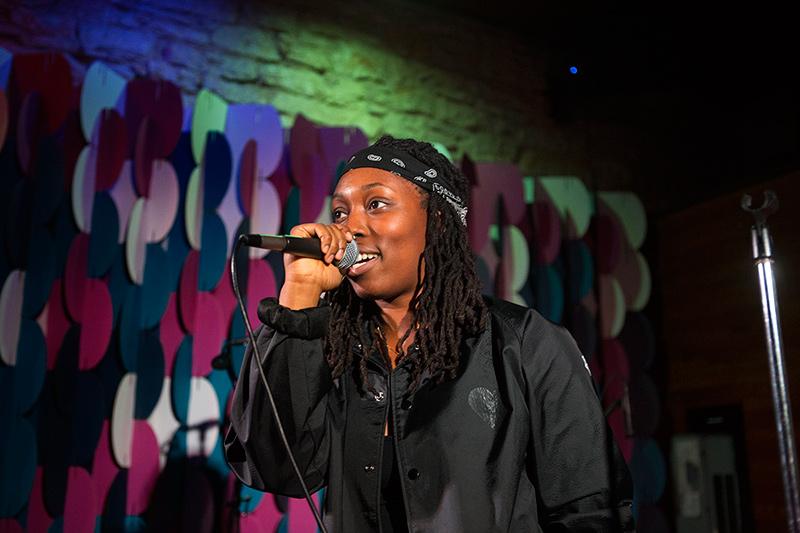 Doe-eyed in an all-black normcore ensemble, she captivated a game, first-night crowd with lyrical charm and honeyed vocals. The first act on Amplify Philly’s now-annual showcase didn’t lack for confidence, which only added to her appeal. It’s obvious she sings because it’s already flowing out of her.

“I like a lot of interaction from the crowd,” she said. “It makes me feel less alone.”

Boppin’ to her own smooth, sensuous flow and inviting the audience to dance along to her soul-inflected beats, she played a pied piper like she sang – as if by second nature. The audience snapped its fingers, clapped, and swayed on her cues to songs from Sole’s 2016 debut Eden, last year’s West EP, and a cover of “Just Friends” by fellow Phillian Musiq.

The Wharton business grad is gifted a versatility that allows her to switch seamlessly from raps to melodies in a matter of seconds, amplified by lighthearted dance moves centerstage.

“When you see your favorite rapper sweating, it’s no joke,” she declared, reaching for her water bottle. “It’s fucking hot.”

“You’re amazing,” cried someone in the audience.

“Yeah, black girl magic and such,” she smiled without missing a beat.

If last night was any indication, that magic is about to enchant many more such rooms.