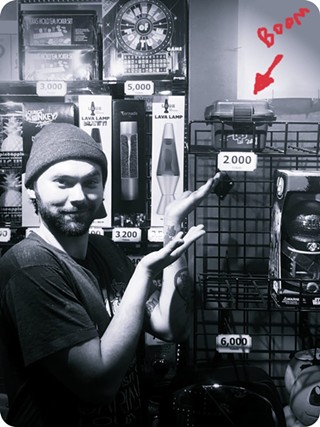 Alejandro Rose-Garcia stashing one of his cassette players at the prize counter at Pinballz Arcade. (Courtesy of Shakey Graves)

“I’ve underestimated people. They’re destroying my challenges.” So told me an amazed Alejandro Rose-Garcia, better known as Shakey Graves, on Friday. “I forgot I’m dealing with human beings and that human beings are crazy.”

Last week saw the Tape Quest launch, a scavenger hunt the Austin native calls a “badass, outdated, and somewhat contrived adventure.” He’s personally created strange mixtapes, glued them into vintage cassette recorders, and hidden them around town. You find and unlock them via clues and challenges.

Those that acquire them – and four of their guests – gain entrance to a private party on Thursday at Geraldine’s, which hosts a live concert and first listen to Shakey Graves’ new album, Can’t Wake Up, arriving May 4 on Dualtone.

Locked in waterproof boxes, none of the cassette players should have been especially easy to obtain. Graves stashed one in an upper rock formation around the greenbelt, then hinted at its location with a vague video. Locating another box required tracking down his friend Spooky Waggins and beating him at chess.

One challenge involved visiting all of East Austin’s remaining moonlight towers, uncovering the letter on each, and using it to decode a special menu item at the Hard Luck Lounge. The most tedious tasking of this Wonka-esque adventure directed fans to document themselves doing eight labors, including finding a grave with the singer’s birthdate on it and singing Mariah Carey’s “Fantasy” at a karaoke establishment.

Many stunts have been completed much faster than the quest-master expected. In fact, one cassette player he put at the prize counter of Pinballz Arcade was obtained before he even announced the clue. A school teacher had ascertained the challenge from looking at Shakey Graves’ Instagram, won the 2,000 tickets it cost by playing arcade games, and took home the cassette player.

When the arcade called the troubadour to let him know, he knew he’d miscalculated the astuteness of his core audience.

In that same vein, perhaps, there’s also been some swindling. Rose-Garcia, an avid bowler, uncovered that one participant convinced a bowling alley attendant to help her fake a computer scorecard that had her rolling an over-200 game. When the tune caller noticed her ball speed was zero, he was forced to disqualify her.

Asked about the ultimate goal of the game, Friday Night Lights’ “The Swede” mused about how the magic of Austin itself sometimes gets lost in the corporate promotions that occur during South by Southwest.

“A scavenger hunt just brings a certain level of playfulness, mystery, magic, and happenstance back into something that otherwise can seem a little whitewashed,” offered Rose-Garcia, 30. “My hope is always to have people be excited to explore the city they live in, to look at it through a different lens, and go places they don’t typically go.”

While most of the challenges have been completed, you still have a couple chances to track down a cassette player and get into the private Shakey Graves concert. Get your clues here and on the Shakey Graves Instagram.