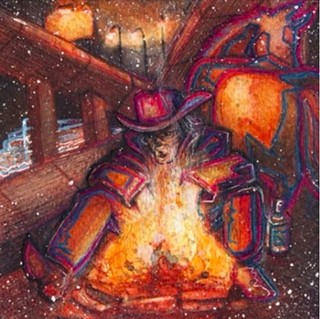 A scene from the Idol Frontier, painted by Sean Faires

Altamesa, the cosmic Americana outfit led locally by Evan Charles, portions out its new album in novel form: over the course of a monthly serial entwining songs, art, and storytelling.

The six-volume series, entitled From the Idol Frontier, kicks off tonight with “The New West,” a gripping desert dirge of spaghetti western horns and twilight twang guitar over which Charles welcomes you to an unforgiving place:

“The New West is a ghost town of stampede herds on freeway lines. All diggin’ down in gutted minds. So dark you never see the signs.”

And when he sings, he sounds like Tom Petty caught in the desolation of a Cormac McCarthy novel.

While Charles’ transformation from rock band fixture in the Daze, Sweet Nuthin’, and Happen-Ins to a lone troubadour was evidenced in 2016’s four-star debut The Long Ride Home, the new material arrives as a more cohesive partnership with Happen-Ins guitarist/singer Sean Faires. Each new single includes a painting by Faires as well as one-sixth of the sequential narrative. Today’s installment is a rural soliloquy titled “The Drifter Speaks.”

The first 175 entrants at the White Horse receive the initial installment of physical goods. The show, also featuring Croy & the Boys and Harvest Thieves, begins at 10pm. 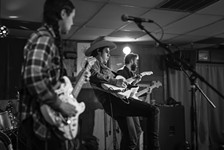