Unrequited love couldn’t score a ticket to the Erwin Center on Tuesday night as a sold-out crowd wept and cheered for Lady Gaga. Native New Yorker Stefani Joanne Angelina Germanotta, 31, reciprocated musically with her heart. The result: a streamlined cycle of adoration that lasted without tire for two continuous hours. 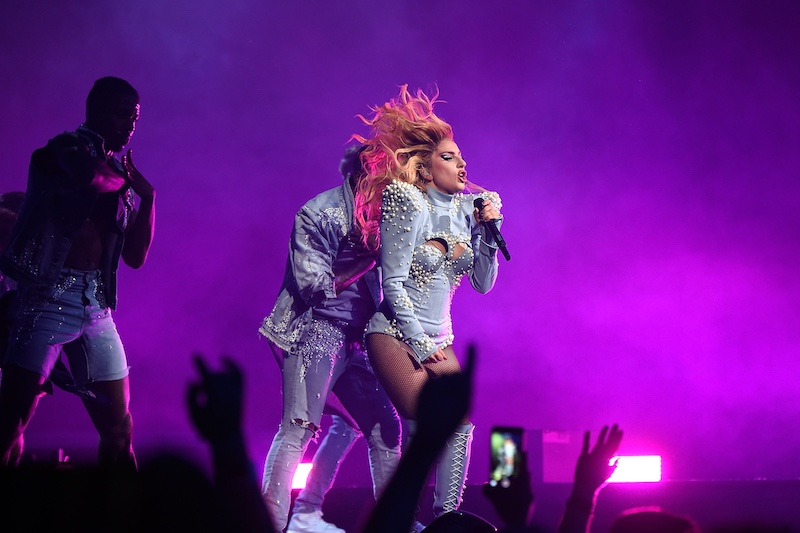 Lady Gaga from the Joanne tour opener in Vancouver back in August. Photography wasn’t allowed in Austin. (Courtesy of Getty Images)

Gaga ascended solo from below the stage unto a mist of fog in a bedazzled pink cowboy hat, black-sequined jumpsuit, and a fringed jacket. She cried out in profile to rock ballad “Diamond Heart” before jumping into the bouncy, country-driven “A-YO,” where she was joined by a black-clad string of matching dancers. Both songs highlight the singer’s fifth studio album, last year’s Joanne.

“You’ve given me so much over the years, Austin. Thank you so much for believing in me – in all of us,” she decreed, pointed to her backing ensemble. “Although there’s one thing you haven’t given me: a poker face!”

The crowd frenzied as the opening synths swelled and dancers flooded the stage, synchronizing themselves to every beat of the 2008 electro-dance anthem. The rest of the set followed similar procedure without the yawns of routine. From “Perfect Illusion” and “John Wayne” to “Alejandro” and “Scheibe,” she barely paused. Her vocals garnered strength with every step and outfit change.

“Put those hands together,” chanted the ringleader as she and her dancers paraded onto a second stage from a flower-coated bridge above the crowd. “But don’t you dare cheer for me. Cheer for Texas!”

“Applause” from 2013’s Artpop began to play and the crowd abided, clapping to the catchy pop hooks before being leveled out by “Come to Mama,” the hearty, theatric doo-wop that showcases Gaga at her best on the piano.

“I would win in a contest on who has the kindest fans,” she said, choking back tears as she examined a painting of her and her late friend Sonja Durham, handed to her by a fan moments before. “She was real strong. It wasn’t until they told her she was going to hospice that she let go. I missed her by 15 minutes.

A more sentimental, acoustic piano rendition of “Edge of Glory” from 2011’s Born This Way was the chosen ode. Her voice never gave out despite numerous pauses and tears.

“I know I missed her passing because she didn’t want me to see. She wanted to be on the edge of glory.”

A still and pregnant pause permeated the UT basketball arena, exiting when dance-pop anthem “Born This Way” alleviated the heavy mood. “Dancing in Circles,” “Angel Down,” and “Joanne” off her latest, and “Paparazzi” and “Bad Romance” from her earlier works followed.

“I got a monstergram,” smiled Gaga as the ending notes to “Bad Romance” prompted a wave of fan letters thrown onstage. “‘You’re so fucking strong’,” she read. “‘You reminded me that I’m fucking strong, too.’”

She sighed, teary eyed, and approached the note’s author Kim in the crowd. After a hug, the mega star scaled the notes to her most recent single, “The Cure.” Afterward, she retreated for the encore, then reappeared in a liquid silver jumpsuit and soft, pink, felt hat, as seen on the cover to Joanne.

“You’ve had a hard year, Texas,” she acknowledged while positioning herself behind the piano. “We’re all here for you.”

The folk-tinged ballad “Million Reasons,” relentlessly emotional in delivery, left her on her knees. Austin was already there. As she descended back down into the Erwin Center abyss, everyone finally exhaled, warm and validated.

SXSW Keynote: Lady Gaga
‘You don’t know fuck about the state of the music industry’