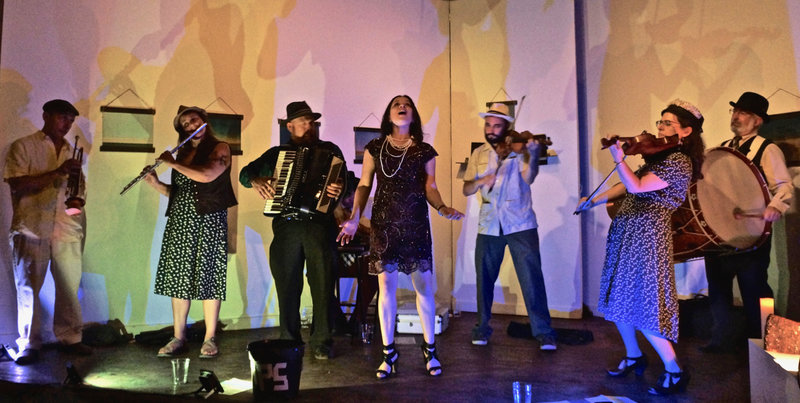 The journey of Mazel Tov Kocktail Hour has been one of identity.

Since forming in 2009, Austin’s most active klezmer ensemble has sought out histories and lessons from elder practitioners of a genre that even genocide couldn’t quiet. They’ve traveled to Poland to experience a Holocaust survivor performing for the family that hid him during the war. They’ve studied co-territorial music in the camps in Transylvania.

The locals have even been “Sieg Heil”-ed off the streets in Warsaw and shared stages with bands of anti-Semites.

“The more we experienced, the more it started to feel like our music,” relates founding member Samantha Goldberg.

Stateside, the 10-piece plies its energetic take on traditional Jewish music to disparate audiences in synagogues, gay pride parades, weddings, and even pig roasts. Meanwhile, they continue researching their cultural roots with help from a trinity of advisors: musical mentor Sherry Mayrent, Yiddish coach Itzik Gottesman, and klezmer expert Mark Rubin, known to gentiles as bassist for the Bad Livers.

This week, MTKH releases its debut album, Shoyn Avek Der Nekhtn or Yesterday Is Dead and Gone, with a concert on Saturday at Austin’s Congregation Agudas Achim that will include performances from Mayrent and Rabbi Neil Blumofe, plus a short talk with Rubin. “Playback” caught up with MTKH at a recent rehearsal to discuss the music and context of a Texan klezmer band in 2017.

Austin Chronicle: Tell us about the scene in Austin for klezmer music.

Samantha Goldberg, flute: It’s often embedded with a scene of people who are interested in other world music – Balkan, Cuban, or any style that feels ethnic and different. A lot of times it’s not necessarily their culture, it’s just a culture that they’re interested in, but the common thread is it’s the kind of music that brings people together.

In Austin, we have sephardic and Israeli music, we’ve got marching bands doing klezmer tunes, we have folk-punk bands playing klezmer. So there’s a lot of it that’s totally outside the Jewish context.

Dylan Goldberg-Blackthorn, accordion: Which some would describe as cultural appropriation.

SG: And I’d describe as a beacon. For me, that’s what it was. I was a train-hopping crusty punk and kept hearing people play songs, and I’d say, “Ooh, I like that,” and they’d say, “It’s a klezmer song.” I realized every song I liked was a klezmer song.

AC: What influence did your mentor, klezmer musician and archivist Sherry Mayrent, have on this album?

SG: Sherry met us in Madison at KlezKamp in 2011 and we told her we wish we could bring her home, and she said we could. At first, when we’d play, she’d look at us with such disappointment. She’d say, “What the hell were you people thinking? I worked with you all night!” When you finally see her smile because you get something right, it’s amazing.

Jennifer Marshall, fiddle: There’s one piece we play and it’s hard to get the right step to it, so during the recording, she made us dance to it and all this stuff. We played it, then all held our breath and looked at her, and she said, “I’m so fucking proud of you!”

David Gilden, trumpet: Sherry’s an amazing authority on the group. She came into this as a teacher and really opened herself up to us. The kind of music we play isn’t chordal. It’s melodically based, so when we do improvise, it’s not how Coltrane or Miles would do it.

It’s setting ornaments on top of this melody that’s constantly evolving. That’s what our teacher has shown us. The melody is always there, but there’s a lexicon of maybe a half-dozen ornaments – trills, etc. – and the phrasing becomes infinite.

AC: Given how much musicians value artistic freedom, what’s it like to give someone authority over your playing?

DGB: It requires the ability to humble oneself to someone with more knowledge and experience. When you learn another language, you want to speak it with the right accent. So we looked to her as our mentor on how to get that accent.

SG: It’s about having someone’s opinion that we trust guiding us. We want our music to be familiar for someone of that culture. If you dropped someone from 1890-1930 in from a time machine, they’d say, “I recognize my music.”

AC: Is it MTKH’s mission to bring traditional Jewish music to places where people don’t normally hear it?

SG: I didn’t realize that was a mission early on. It wasn’t until I called up the world music dancers here in Austin and said, “We have this klezmer band and we’d love to play one of your dances!” and they said, “Well, you know, there’s a Jewish community center in town you could play at.” I told the lady that was how this music ended up not existing – because we isolated and segregated ourselves, and ended up being killed.

So it did become a mission to bring klezmer into public places. Doing that has helped some people identify with their culture from a place that isn’t a synagogue. It’s also important for us to build bridges between different groups of people and demystify this music.

We were playing at [University of Texas’] Russian Day and our singer, who’s from Belarus and speaks Russian, asked the kids, “Does everyone know what World War II is?” This girl, probably middle school-aged, raised her hand and said, “The Nazis wanted to steal the art, but really Hitler wanted the art more than anybody.” Svet, our singer, said, “ ... and lots of people were killed, including this kid’s parents” when introducing the song.

So we don’t skirt around the subject of oppression and genocide, and we discuss labor issues and rebelling against the war machine. Not just from today’s standpoint, but from our strong cultural history of it.

AC: With traditional bands, there’s a sentiment that you’re carrying a torch, but, as artists, you don’t want to be pedantic. Is it a challenge to represent yourself as modern individuals with diverse musical backgrounds while playing an authentic trad-Jewish style?

JM: It’s a living tradition. We’re living Jews playing music and, therefore, it’s our music. We have a message and presence right now.

Dylan’s done some great poetic translations of some of the old pieces on the CD, which gives it its own feel. Like on the song “Papirosn,” at first Sherry didn’t want us to include it because it’s so overdone. Then she heard our version and saw it as new and fresh.

DGB: Our singer knows it as a Russian song, so she sings the first verse in Russian, then I sing the a poetical translation of the second verse in English, then verse three is in Yiddish. It brings cultural attachments together in a way that hasn’t been done before.

SG: We push the envelope a little bit when we play. We’re not just happy Jews dancing onstage. We’re still pissed off, we’re still regretful that we lost our entire culture, and we’re still shining through it. There’s still a very strong understanding that our music was dead and taken away from us.

It’s only when we’re playing in the Jewish context that we’re truly playing the music. 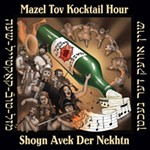