Cali pop weirdo Ariel Pink remains both widely influential and subversive. Behind a decade of amassed live train wrecks and incendiary interviews, the avant-garde act’s Sunday night performance at Cheer Up Charlies proved the first Sound on Sound makeup show to sell out. 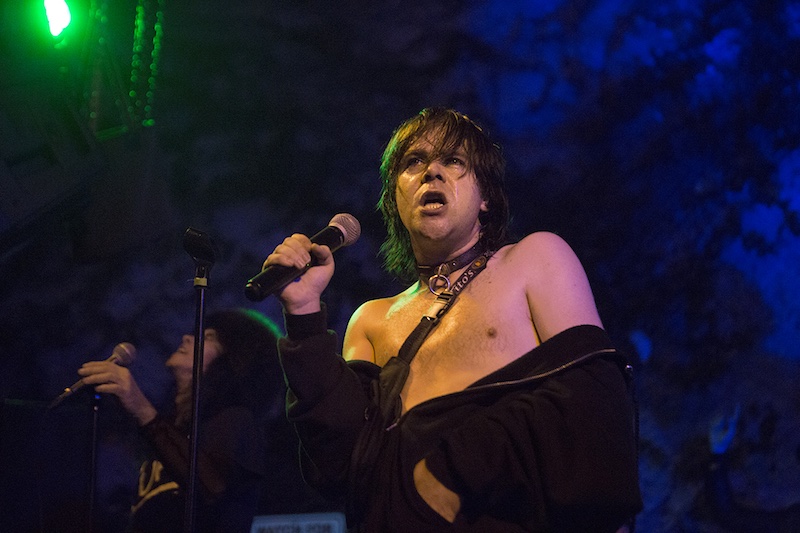 Moving “down the rabbit hole of weirdness,” a second-half stint of deep cuts pulled from the songwriter’s twinge-y analog days. At the hour mark, he’d lost a few of the throng. “Baby” picked it back up before a five-song encore of bedazzled dance hits.

Finale “Round and Round” had Pink walking over the crowd like water, draped in an audience-volunteered black wig as the goth ringleader of his own absurdity circus. Girlfriend and sometimes-bandmate Charlotte Lindèn Ercoli, the subject of the singer’s recent write-ups for questionable onstage interactions at a San Francisco show last month, watched from the side of the stage.

The enthralling freak performance didn’t really answer the question of Ariel Pink, however: media-savaged savant or indie pop’s biggest asshole? The enigma was left up in the air, his less palatable bits further selling the singular persona.

Don Bolles of Seventies punk legends the Germs acted as Pink’s backup vox and hype man throughout. The sidekick provided his own summation of the spectacle in a grandiose outro: