Chris Stapleton made his Austin City Limits debut Monday riding country music’s hottest hand. Long a hit songwriter, he stepped into the spotlight with 2015 debut Traveller. Ahead of a Circuit of the Americas show Thursday, the Kentucky native stamped ACL’s 43rd season with a true triple threat of guitar licks, powerful vocals, and stellar songwriting. 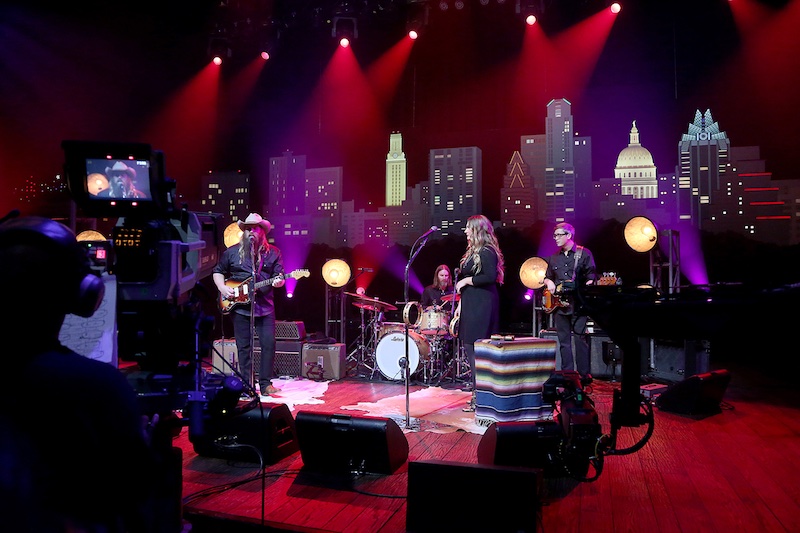 Although an overflow crowd arrived amped with anticipation, Stapleton, 39, took his time in warming up the 90-minute set. The surprisingly minimal quartet, an instrumental trio augmented by the bandleader’s wife Morgane on harmonies, felt somewhat reserved in the opening run of songs. New hit “Broken Halos” from this spring’s From A Room: Volume 1 began to settle the group into a steady pocket, and Stapleton loosened in introducing “Them Stems” with a requisite nod to Willie Nelson.

It wasn’t until the band stripped down to a core trio for the slinky, soulful blues of “I Was Wrong” that Stapleton began to unload the full power of his vocals and scorched guitar on an extended jam. He wails with ferocity, but is equally capable of hushing a crowd with gut-punch ballads. Standing solo and acoustic for “Whiskey and You,” he bought the house to pin-drop silence pierced only by scattered whoops from the audience between verses.

The solo bow marked the set’s turning point as the band returned with more force. The Waylon and Hank Jr. touch of “Outlaw State of Mind” fed into a roaring breakdown jam, bleeding distortion to segue into the bassline dread of “Death Row.” By the time Stapleton delivered his debut hit “Traveller,” the smooth and catchy tune seemed out of place amid the blur of guitar and howling vocals, showcasing just how much Stapleton has grown as a performer over the past two years.

“Second One to Know” brought a roar of appreciation before Stapleton’s soulful and burning take on “Tennessee Whiskey” closed the show with a fiery fade-out. Returning for the rare ACL taping encore, Stapleton inserted an unplanned solo turn with “Either Way,” again hushing the house, followed by a ripping blues finale of “Sometimes I Cry.”

As a performer, the singer doesn’t expose much versatility between his raw ballads and roaring jams, but he doesn’t need to. The songwriting strikes direct and forceful, his voice howling enough power to hold an audience and burst songs wide open. Layered behind smoking guitar licks, Chris Stapleton hits a perfect roots blend that only continues to improve and sharpen.

“Either Way” “Sometimes I Cry”