Reigning over Bass Concert Hall next Thursday, Oct. 19, King Crimson remains one of the few bands tagged “progressive rock” that actually progresses. While other acts ape early-Seventies sounds – even those that hail from the era – the British/American group led since 1969 by guitarist Robert Fripp keeps pushing into new realms.

In that spirit, Crimson’s current configuration is eight men strong with a three-drummer frontline, and includes veterans Tony Levin, Mel Collins, and Pat Mastelotto, plus newcomers Jakko Jaksyzk, Gavin Harrison, Jeremy Stacey, and Bill Rieflin. The 21st century Crimson returns to Austin for only its third concert locally, and first in over 20 years. We spoke to bassist/Chapman Stick player Levin, 71, who’s been in King Crimson since 1981 barring a few years off in the early 2000s, by phone from his home in Kingston, New York. 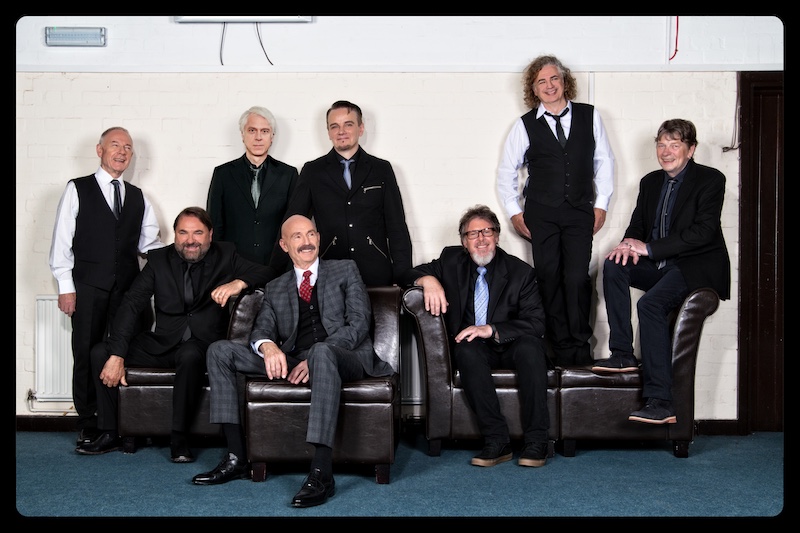 Austin Chronicle: Crimson drummer Pat Mastelotto lives here. Did he say, “I want my hometown to have a Crimson show?”

Tony Levin: Actually, it’s not Pat or me that makes the decisions. It’s Robert Fripp and the management. But it doesn’t hurt. Generally, it’s where somebody lives. We’ve rehearsed in the Woodstock area, where I am, and done the first show in Albany. We’ve rehearsed in Seattle, where Bill Rieflin lives, and we’ve also rehearsed a lot in England, where four of the guys live. Pat turned in a request and said, ‘Hey, it’s my turn!’ and it turned out that was the plan.

AC: There’s a lot of new material in these shows. Is coming up with new stuff harder when you’re playing with musicians you haven’t played with in previous incarnations?

TL: Not really, no. I’m listening a lot to the other players if they’re really good, and in Crimson they always are. That’s gonna help inspire me. It’s not gonna surprise me, or hold me back. [Rather], it’s really going to push me to keep up with the creativity of the other players, whether they’re guys I haven’t played with before, or guys I have.

AC: You played with Adrian Belew [singer/guitarist for Crimson from 1981-2008] for so long. How has the band chemistry changed since then?

TL: The chemistry’s always different in every band, in every incarnation, but for us musicians, it’s not an effort to sync into the chemistry. It’s what you do your whole life – play with others. I’ve been very lucky to play with many great drummers. I play differently with each of them, but I don’t sit and worry about how am I going to play with this drummer. It’s different, and I just play with ’em.

In the case of the Eighties incarnation of Crimson, it was just four guys and a lot of room to experiment and to be very busy. So this incarnation is very different. With seven or eight players, there’s less room to go crazy and do all the things you can do. But that’s another challenge: to choose the right times to step out in front, and the right times to step back and let someone else be in front.

AC: Does the presence of new music mean a new album is forthcoming?

TL: Not that I know of. Let me put a verbal asterisk on that, in that I never know for sure what’s coming up. King Crimson is always surprising me. You would think that after 37 years in the band that I would have a good sense of what we’re doing. But I could say, ‘No, there’s not gonna be a studio album,’ and I could show up in Austin and Robert could say, ‘We’re gonna do a studio album as soon as the tour ends.’

I think we’ve hit on a good formula for us, with recording at very high quality the live shows. We rehearse a lot. Another band could get together for a day, but we’ll rehearse for six, seven, eight days to really hone it in. So what we call the live recordings can be pretty good. They can be essentially like studio albums, because we’re not making mistakes at that point.

AC: Outside of Crimson, your resumé is pretty amazing. You’ve played with Peter Gabriel for as long as Crimson, and you also worked with everyone from Chuck Mangione, Carly Simon, Tim Hardin, and Paul Simon to Gary Burton, Herbie Mann, Lou Reed, David Bowie, and Alice Cooper. Do you ever look back and think, ‘Wow, this has been a hell of a career so far’?

TL: In fact, I don’t look back. I’m like most musicians: I put my head down and focus on the thing I’m doing. Once in a while, I look to the future, but rarely do I look back except in interviews. I get asked about John Lennon and David Bowie and things, and that’s when I think about it. I do have a couple of pictures of Lennon in the studio just for inspiration. Otherwise, I’m not a guy who lives in the past.

At the same time, I will admit I feel very fortunate, and I realize that luck had a lot to do with half of those names you mentioned. It was just luck of their producer calling me, and I’ve had a wonderful career because of that. But to be honest, most of my focus is on trying to play the King Crimson music right.