Harry Styles, 23, became this year’s most famous rock star because in time honored fashion he dared to care about teenage girls. Suited in pink satin with slicked back hair, the English heartthrob, Dunkirk soldier, and ex-One Direction singer proved to a sold-out Moody Theater on Wednesday night that letting go of your past isn’t always valid. 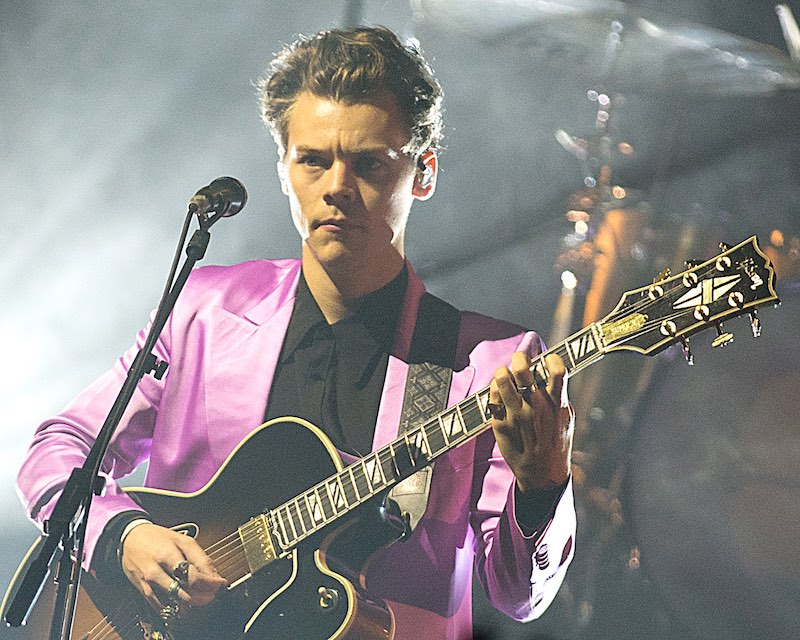 With the singer silhouetted onto a pink tapestry that hung from the ceiling, strings ascended into his first song, “Ever Since New York,” and the shrieks of hundreds of teen hearts soared as the fabric dropped down to reveal Styles strumming his guitar as backed by a fourpiece of drums, keys, bass, and guitar. Audience screams aside, the soft-rock tale proved calming with folk airs sprinkled throughout.

The next songs, “Two Ghosts,” “Carolina,” and “Sweet Creature” followed similar methodology: Pastel ballads fluctuating between country soul and Seventies rock in his honeyed rasp. Tenderly soothing you while a mild Styles lived center stage with his hands behind his back or plucking his guitar, they tamed the hysteria of stardom that surrounds him in 2017. “Carolina” bopped gently to its sun-soaked grooves.

Any tepidness slowly dispersed as he teased his boy band past.

“The last time I came here was with some wonderful friends of mine,” he offered. “If you were there, you might like this song.”

Shrieks escalated as “Stockholm Syndrome” from One Direction’s fourth LP, 2014’s Four, began to play. His voice was inaudible as the audience took over lyrical duties for the pop anthem, Styles actually stepping back for half the song as he looked around cheekily watching arms wave and hearts stop.

“It’s time we kick it up a couple of notches,” he announced. “All I ask is that you dance your asses off.”

“Only Angel” picked up the tempo as rock star vehicle. Shimming, kicking, flailing, he darted across the stage to the song’s harder rock punches with unwavering confidence before transitioning into the Elton John-inspired “Woman.” Then he cradled everyone back down with melancholic ballads “Meet Me in the Hallway” and Ariana Grande’s “Just a Little Bit of Your Heart.” Styles worked the pendulum effect like a performer three times his age.

Ultimately, nostalgia hogged the spotlight with the appearance of a rock rendition to One Direction single “What Makes You Beautiful,” which traded its beach-combing pop melody for grungier guitar thumps. That set up the sultry “Kiwi,” whose shimmering riffs framed his hard wails. The house watched intently – rapt.

He skittered offstage afterward, but quickly returned for the encore, escalating shrieks piercing eardrums. A heartfelt “From the Dining Table” welcomed the crowd back.

“If you’ve supported me since yesterday or through the years, thank you so much,” he bowed. “I couldn’t feel more honored to perform in front of so many wonderful men and women.”

He departed with fervent hit “Sign of the Times,” Fleetwood Mac cover “The Chain,” and a repeat performance of “Kiwi” that found him thrusting and sliding into the hearts of anyone who paid attention.

At the end, and in just under 90 minutes, Harry Styles manifested more Jagger than Timberlake, with added sincerity and generally swimming in temperate musical waters. Sometimes, that felt born out of necessity since any movement on his part incited a riot. Regardless, he celebrated One Direction’s boy band past, his power coming from the choice to embrace over eschew.

The AggreGAYtor: March 11
Your daily dose of LGBTQIA news

The AggreGAYtor: January 9
Your daily dose of LGBTQIA news