Londoner’s voice has “next big thing” written all over it

The shifting winds of the music industry make pinpointing future stars difficult. Sometimes, however, the signs are recognizable: a smart song placement, a savvy guest spot. Nigerian-born/London-based singer-songwriter Jacob Banks isn’t a household name, but the contingent of die-hard fans in the modest crowd Sunday make that seem inevitable. 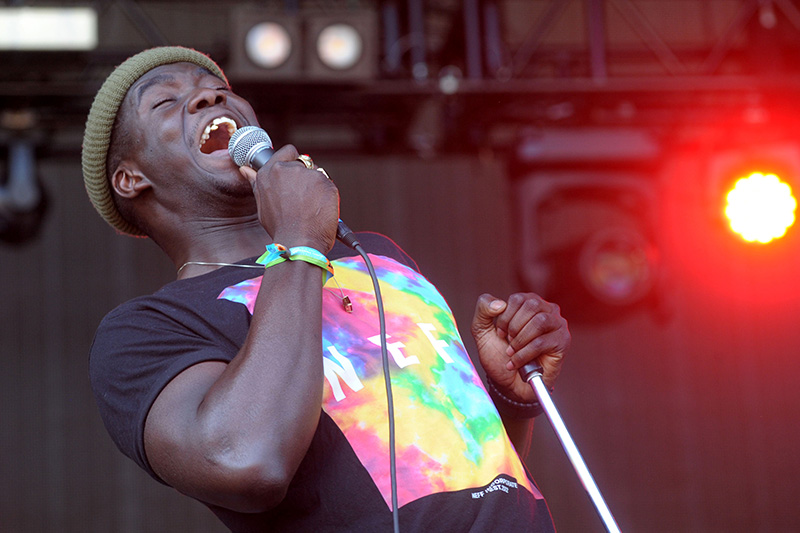 The early-afternoon gaggle of kids drank in every note, breath, and hum that issued from Banks’ larynx, going crazy for songs the rest of the crowd greeted (at first) with muted appreciation. Given the evidence, that balance is likely to change.

Banks isn’t the most charismatic individual ever to hit a stage, but choreography and crowd work play second fiddle to his obvious asset: a remarkable voice. Simmering one minute, burning the next, Banks seemed perpetually caught between a croon and a growl. That sweet spot made his contemporary R&B transcend the sometimes-stilted electronic grooves on which they’re built.

The slow-jam digital thump of “Mercy” and “Monster,” the first notes of which earned a bigger cheer than this writer heard at any other show this year, get overly repetitive, but when Banks unleashed his golden pipes, the rhythm didn’t matter. A little rock and reggae altered the mood just enough to prevent stupor, and when Banks really hit his stride on the smoky, protest gospel of “Unholy War” and the passionate grit of “Chainsmoking,” all sins were forgiven.

So much so that Banks earned that rarest of ACL Fest occurrences: an encore. Closing with an in-progress tune sure to be a new fan favorite, the singer rewarded fans and gained converts with a set that had “next big thing” written all over it.