“Hey, you! Dude with the glasses,” Americana icon Ryan Adams hollered mid-set on Friday. “Are you havin’ fun? Are you rockin’ out? Then stop takin’ fuckin’ flash photos! I have Ménière’s disease [an inner ear condition that could eventually claim his hearing], and flash messes me up! Seriously, if you haven’t got the photo now, you never will! Give it up!” ’Twas the ex-Whiskeytown leader’s sole outburst the first night of ACL Fest 2017 from the Miller Lite stage, a reminder of his volatility. He may be more professional now, but there’s still a hint of unpredictability.

Set amidst gigantic fake amps, stuffed animals, piles of ancient TVs projecting computer-controlled static, alt.country’s onetime enfant terrible looked to be having a fire sale at the warehouse holding Neil Young’s Rust Never Sleeps props. Emerging in goth superstar dry ice, the tousled troubadour, 42, seemed as if he wanted to fool someone into believing he was a metal musician in his Motörhead T-shirt, Flying V guitar, and what appeared to be Cliff Burton’s old patched denims.

What emerged instead from the amassed Fender amps was classic Ryan Adams. His millennial take on Eighties alt-rock baselined lots of distorted, jangly guitar riffs and solos straight outta the Crazy Horse School of Strangled Single Notes. He then paired it with the literary, bruised-heart lyricism of a Paul Westerberg.

As such, he emphasized the “classic” in his rock, turning in a solid-gold greatest hits set, from early standout “To Be Young (Is to Be Sad, Is to Be High)” and 16-year-old MTV breakout hit “New York, New York” to “Cold Roses” and “Let It Ride” from his Cardinals days. Karen Elson even dropped in for a pair of duet cameos.

And in a day dotted with Tom Petty salutes, the only surprise was Adams sticking to his script – no ragged “Don’t Do Me Like That” or “Breakdown” in sight. 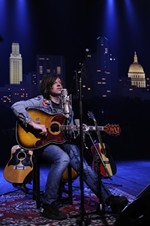