Cradled by swashes of warm yellow and orange lights from the Tito’s tent early Friday evening, British DJ Bonobo (Simon Green) stood behind boards of keys and electronics, flanked by a quartet consisting of a drummer, guitarist, an interchanging flutist, and a keyboardist. 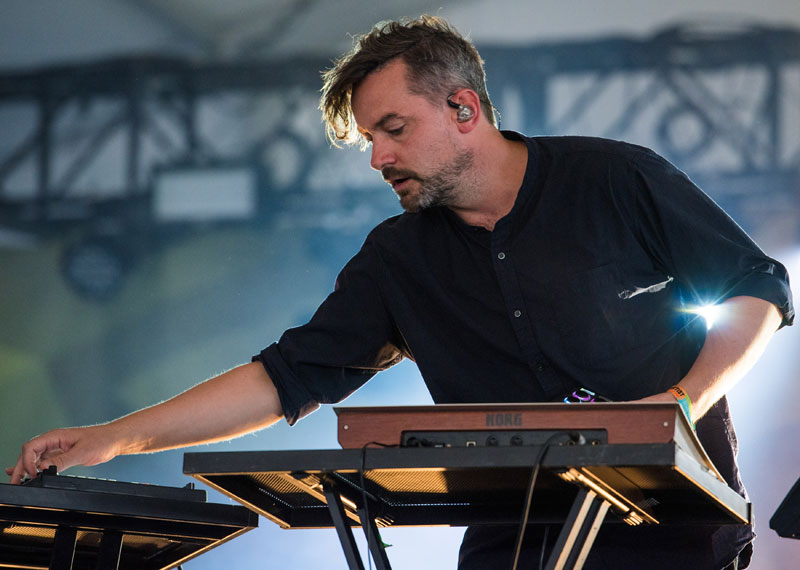 Bonobo’s career spans nearly two decades, but his current output, Migration (January 2017), backboned the hourlong set. Unlike former albums Animal Magic (2000) and Black Sands (2010), the new one abandons downtempo buildups in favor of dynamic textures situated somewhere between Boards of Canada and Four Tet. Live, it all noodled with the improvisational mechanics of jazz.

Even in moments that mirrored Bonobo’s usual DJ sets of jagged synths and climatic junctures, the instrumentation balanced fragmented descents, tranquil lulls, earnest summits, and everything in between. Assisted by songstress Szjerdene, “Towers” and “Surface” gleaned a pop sensibility rarely seen in Bonobo’s former work as her crisp rasp floated like plumes of smoke over languid melodies.

Switching between bass and synth in songs “Figures” and “7th Sevens,” Bonobo demonstrated his knack for emotive instrumentation that swells into stacked layers of shimmering flute flutters, serrated percussion fills, and blooming stringed swirls. From the start of his live band tours in 2014 with The North Borders, Bonobo and company inject a vitality that allows the subtle material to blossom into live and longing epics.

Animal Magic
Bonobo makes a rare appearance in the wild