Sound on Sound Fest has been aborted five weeks before the second-year Austin music festival was scheduled once again for Sherwood Forest Faire in McDade, Nov. 10-12. Organizers tell “Playback” a primary investor pulled out, making it impossible for them to stage the popular gathering. Williams wouldn’t identify the backer that pulled out, but said that the move wasn’t related to ticket sales, which he said were “on track” with expectations. The investor pulled out roughly a week and a half ago and the SOS team scrambled to find new investors, but couldn’t make anything work. The decision to call off the festival was finalized in the last few days.

The veteran Austin booker didn’t know exactly why the investor got cold feet, but acknowledged that potential partners were a lot more bullish on festivals a few years ago and now there’s more of a perceived risk. Williams also noted that the financial backing was earmarked for production and paying talent, whose teams are now asking for more money up front due to a trend of botched fests like the much maligned Fyre Festival early this year.

The news comes as a gut punch for Austin’s hardcore music fans, who consider SOS a continuation of the beloved Fun Fun Fun Fest and favor it as the area’s strongest offering of underground favorites, genre legends, and emerging artists. This year’s lineup, which included a performance from doom metal legacy Electric Wizard that local music extremists had been awaiting for over a decade, was well-received upon announcement.

The process of refunds begins this afternoon. All ticketholders will receive a 100% refund within the next five to seven business days. Those who purchased SOS passes will have first dibs on makeup shows, then they’ll be put on sale to the general public.

Williams plans to salvage as many festival performances as possible with a series of club shows similar to what played out after Levitation 2016 was scrubbed due to weather. He has holds on a variety of large and small venues in town, but unlike what transpired with Levitation, there’s over a month to plan shows. Concert announcements are scheduled for Oct. 16 – after ticketholders have been refunded.

Williams says the loss of the investor will not affect his booking company Margin Walker Presents, which counts a staff of 14 and books hundreds of shows in Texas annually. This is now the second festival he’s had washed out due to splitting with investors. In 2016, he ceded Fun Fun Fun – as well as his previous booking handle Transmission Events – to former minority investor Stratus Properties.

As for Sound on Sound, a return in 2018 or thereafter currently seems doubtful.

“It’s hard to come back from getting knocked down, especially with a new festival brand like Sound on Sound,” said Williams. “But I’ll never say never.” 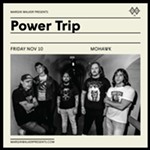