Police Chief: ACL Fest Will Be “Safest Part of the City” 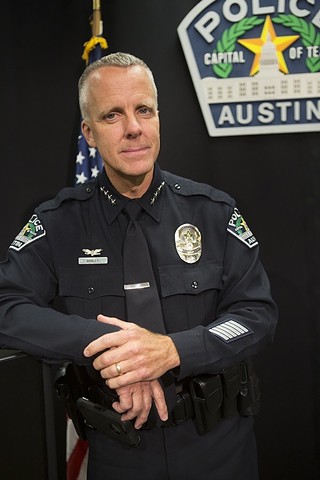 “This is an annual event that we’ve enjoyed in Austin for quite some time,” Manley reminded reporters. “We expect it will be no different this year, but I do think it’s important in light of what happened in Las Vegas last night [to reiterate] that we want folks to come out. We want you to enjoy yourself, and [we want to] reassure you that we’re doing everything we can to make this event as safe as possible from what we know as potential threats that we’ve seen to large scale events around this country and others.”

Manley went on to say that there are “no known threats” to ACL Fest. When asked if APD has sufficient manpower to protect against and deal with a situation similar to Sunday’s shooting, Manley proved unequivocal:

“There will be large number of officers in a concentrated area at this festival. Actually, from that perspective, it’s going to be the safest part of the city to be in during both weekends just because of the sheer numbers of officers that will be present.”

He added that officials from the Department of Public Safety have reached out to APD offering to supplement staff. Manley posited that police presence will look normal to festivalgoers, but there will be officers on foot, bicycle, ATV, and squad cars in and around Zilker Park. He also touted APD’s “Counter Assault Strike Team”, which is trained to respond to active shooter incidents.

Regarding an individual shooting from a hotel window, as was the case in America’s most recent act of homegrown terrorism, Manley said they’re paying attention to those areas and “reevaluating security plans in light of what manifested in Las Vegas last night.”

The APD Chief also noted that attendees are screened on the way into the festival grounds. In terms of personal responsibility, he encouraged festivalgoers to remain sober enough to take care of themselves and advised everyone to know escape routes at all times, in case there were an emergency.

ACL Fest’s annual daily attendance remains in the vicinity of 65,000-75,000, almost triple that of the Route 91 Harvest Festival.

Several Austin musicians took part in the Route 91 concert, which is produced by the country arm of Live Nation, the parent company of ACL Fest organizers C3 Presents. Nudie-suited country act Midland played the Las Vegas event on Friday. Texas’ Josh Abbott Band, which features Austin’s Grooveline Horns, played on Sunday some five-and-a-half hours before shooting erupted from the windows of a nearby hotel tower. Abbott posted on social media that his band and crew are safe.

Grooveline Horns saxophonist Carlos Sosa told NBC Los Angeles that he was onsite when the shooting began. He reported seeing bullets or shrapnel hitting the ground.

“I didn’t think it was real until I saw somebody lying on the ground with blood,” detailed Sosa. “People were screaming and asking for belts and handkerchiefs. The shooting was still happening. We didn’t know it was somebody from the hotel. We thought it was somebody on the ground.”

A good indicator of whether ACL ticket-holders are fearful of attending the festival will be if substantially more passes show up on the event’s official ticket exchange website, where you can sell wristbands at any price. So far today, there’s only been a slight uptick of second-party passes being sold.