Arcade Fire Plays to the Hardcores

Judgment on Arcade Fire’s fifth LP, July’s Everything Now, proved swift and generally brutal. Reflecting such – or perhaps in the parlance of the Canadians’ previous album, Reflektor-ing such – was the notably sparse crowd Wednesday night at the Frank Erwin Center. Not that it slowed the Montreal collective for a single moment. 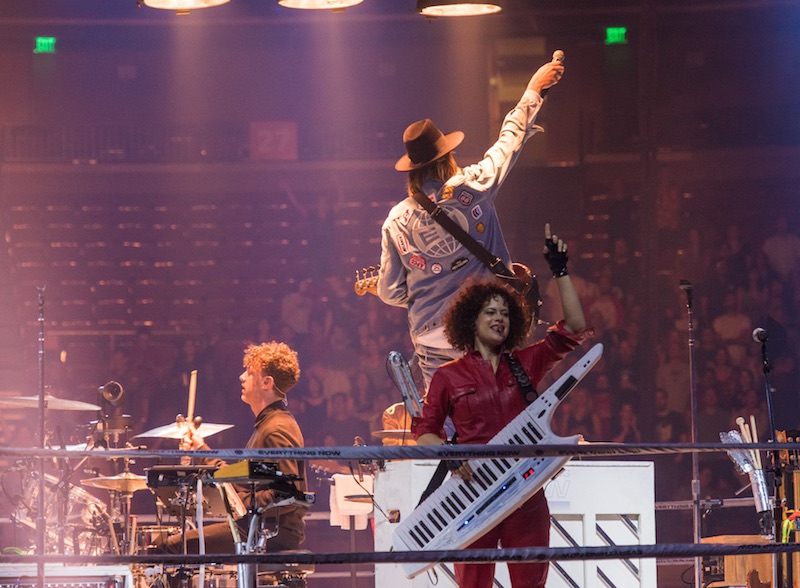 Despite the less-than-favorable reviews weeding out fair-weather fans, Arcade Fire took on the audience by way of a stage centered in the middle of the UT basketball arena for 360-degree visual access to the group. A drum kit, congas, at least six keyboard set-ups, and an assortment of other instruments were then vigorously attacked with remarkable heart and infectious energy. Four sides of LED screens and a lighting rig relying heavily on strobes accompanied.

Introduced as though they were boxers, the band appeared fit and feisty. Good thing, too, because rather than a fight match, the Red River drum turned into a dance club. With 2013’s Reflektor, follow-up to Album of the Year Grammy winner The Suburbs, Arcade Fire subtly transitioned from melodic indie crew to dance rockers while retaining all the emotion and authenticity.

Only a power outage discourages the true boogie maven, so neither band nor fans appeared disheartened by the empty seats. Warm bodies clustered the edges of the stage, all of them ready, willing, and able to respond to the disco synths pulsating through the group’s new title track and album mate “Signs of Life.” Both transitioned effortlessly into a sing-along on “Rebellion (Lies),” from now-iconic 2004 debut Funeral.

From that point forward, and with the aid of two giant disco balls, Win and Will Butler, Régine Chassagne, Richard Reed Parry, Tim Kingsbury, and Jeremy Gara raged through a set ratcheting up the energy song by song. Arcade Fire built a deep discography brimming with “fan-favorites,” so every next song played prompted an audible “whoo” and nostalgia-induced vigor from the faithful. And they played everything we the hardcore had bargained for.

“No Cars Go” to “Neighborhood #1” to “Ready to Start” to the electrifying “Sprawl II” – Arcade Fire’s live catharsis scored. The band’s almost gospel-like approach to songcraft felt Pentecostal in spots. That said, the best moment came during the encore on ballad “We Don’t Deserve Love” merging into “Everything Now (Continued)” and lastly the song every fan waited for, a tune even the band looked eager to play for them, “Wake Up.”

“Wake Up” confronts you with an indie symphony built on choral harmonies, sprawling guitar, and driving bass. Over the years, the Funeral track has become universal in the sense that Arcade Fire fans tap into the pain, frustration, and ultimately hope that the track courts hard. Thus, the Erwin Center unleashed a tsunami-sized cry of “whoa-oh,” proving yet again that there’s something truly liberating about singing in unison with a bunch of strangers experiencing the same emotional outpouring as you.

Arcade Fire – Deep in the Heart of Texas
Bobble heads, confetti canons, and the official afterparty