Bathed in the luminescence of their own logo towering behind them Tuesday night, re-formed UK guitar pedal worshippers Swervedriver treated a formidable 3ten ACL Live crowd to a double bill of 1991’s Raise and 1993’s Mezcal Head, both Creation Records releases played in their entirety from a stage scattered with Marshall, Top Hat, and Matchless amps. 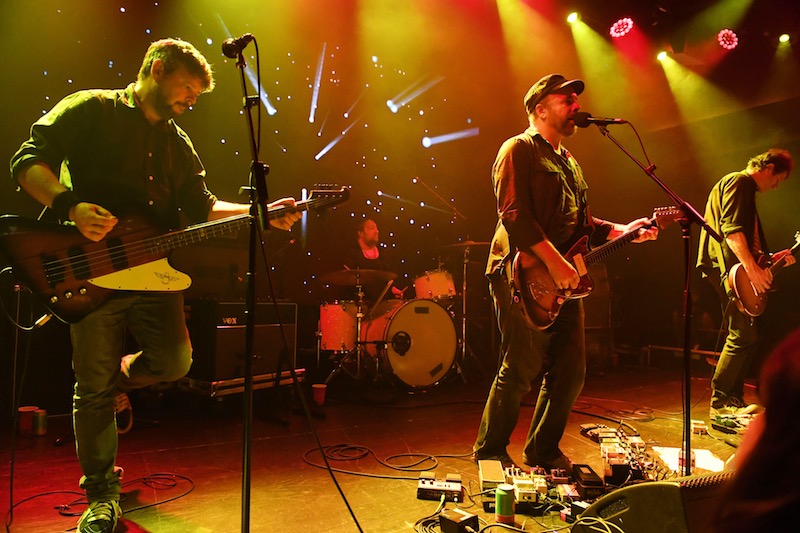 Frontman Adam Franklin, switching Jazzmasters back and forth so often he temporarily lost a knob, and guitarist Jimmy Hartridge, adorned in his requisite striped shirt, remain the only original members of the Oxford act, currently backed by bassist Mick Quinn (Supergrass) and Mikey Jones (Franklin’s Bolts of Melody) on drums. What the quartet lacked in stage banter balanced out in musical virtuosity and a solid delivery of shoegaze-tinged alternative rock.

At times cloaked in a blood-red light and with visual backgrounds resembling a Windows 98 screensaver, the group hit its stride with audience favorite “Son of Mustang Ford,” causing a sea of raised hands, many holding camera phones. Midway through the first set, “Rave Down” grooved into adventurous territory, the band adding an occasional psych flourish and hypnotic blur of chord bending that extended the songs’ stage presence by minutes at a time. That begged for the removal of earplugs in order to take full advantage of nuances in feedback and noise.

Stage lit in hues of pink and blue recalling the recent film reissue of Italian horror classic Suspiria, the second set showcasing Mezcal Head betrayed the toll the evening took on Franklin’s voice beginning with “Blowin’ Cool.” His voice never recovered, sustaining an occasional tonal inadequacy largely disguised by the wall of sound the band permeated. The latter set also found the band delving into elements of space rock and Loop-esque droning vibrations, arcing notes out into the ether. “Last Train to Satansville” turned into a full-blown Levitation psych freak-out.

Though the performance proved the quartet more than capable of handling the musical heft of the two albums, “Harry & Maggie” bogged down into a muddled mix during the chorus – marred by Hartridge’s chord chugging. Despite an energy lull during the thrumming “Duress,” the crowd rallied for “Never Lose That Feeling,” its LP mate “Never Learn” melding the two in a clash of reverb and wah-wah in excess of 15 minutes. An encore of “Juggernaut Rides” and “Jesus,” a deeper catalog track and a Velvet Underground cover, respectively, capped the evening after Swervedriver’s quick break from the stage. 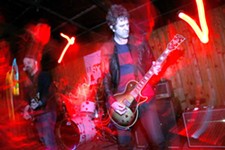 SXSW Music Review: Swervedriver
Pulling the plug on the sweetest of crunches