War of the Folk Fests

“Putting a music festival on top of another just isn’t the Old Settler’s vibe, is it?” So asked – rhetorically – Old Settler’s Music Festival Executive Director Jean Spivey on Monday after learning that the new Driftwood Music Festival would debut next spring on the same date as OSMF and in the same location from which the latter was recently evicted. 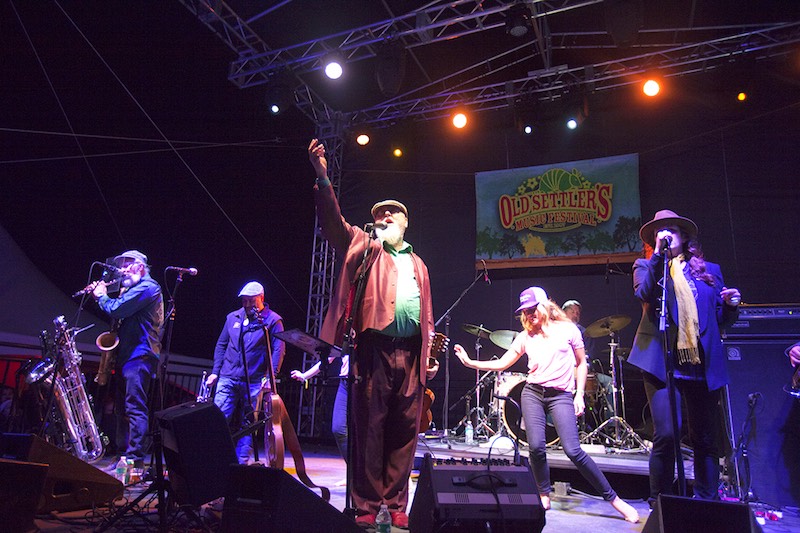 Spivey is less than pleased that several veteran OSMF organizers, namely former president and then director of operations Scott Marshall and production manager Ryan Brittain, have begun a competing music event. Driftwood Music Festival is scheduled to debut April 19-22, 2018, the same days as Old Settler’s, at the Salt Lick Pavilion and Camp Ben McCulloch – where OSMF had been held for the last 15 years and were hoping for a 16th until recently. The longstanding local roots music festival announced relocation to land they purchased in Dale, near Lockhart, but had been planning a victory lap year in 2018 at the barbecue site.

A website for the Driftwood Music Festival describes the event as spotlighting “roots, Americana, folk, Texas country, and bluegrass music,” the same spectrum of genres OSMF programs. The site further introduces DMF as “produced by the same friendly folks who created years of memories at this location,” positioning itself as a continuation of the Old Settler’s experience by closing with, “Welcome back to our party!”

“Driftwood Music Festival is created out of necessity to continue the love of music and volunteerism, combined with a beautiful place found only in Driftwood, Texas,” said Brittain, who with Marshall has a combined four-decade history with Old Settler’s, this afternoon. “We love it down there. The community – Camp Ben McCullouch, the Salt Lick, the Hays County Sheriff’s Department, and all the Hays County communities – depend on us to have an economic impact there. They’ve done a great job of supporting us and we’ve done a good job of being stewards of their land.

“Therefore, we’ve been invited back to do this. We plan on continuing that economic impact instead of leaving that area.”

While the news of competing folk fests will come as a shock to OSMF faithful, Spivey admitted she’d caught wind of Driftwood Music Festival.

“I found out when they started calling all our volunteers to get them to work the other festival,” she acknowledged.

As a result of the OSMF principals splitting into simultaneous competing events, faithful festival-goers will now have to chose between the official brand and a new one at the former, beloved location.

“It’s a horrible situation for me,” admits Brittain. “I don’t like that it’s the situation, but it’s the date we have and always have had for this event.”

Old Settler’s got the boot from the Salt Lick Barbecue Pavilion in mid-August. When Spivey and company confirmed acquisition of 145 acres in Dale and prepared to host the event there in 2019, they received notification that they wouldn’t be able to use their usual gathering place in 2018 as they expected.

“When I called them in June and told them we bought land and were moving but not until 2019, [Salt Lick owner] Scott Roberts’ assistant’s response was, ‘That’s great,’” related Spivey. “I said, ‘Oh, why is that great?’ She said, ‘We sold some of the surrounding land to developers and we’re going to try to get you into the contract for [another] year or two after we finish the main deal point.’”

Spivey said she was then stunned to receive a letter from Roberts saying they couldn’t have the festival grounds in 2018 as a result of development. OSMF organizers subsequently sent out a press release announcing they would hold their festival April 19-22, 2018, in Dale.

“To hear another music festival is going right on top of it doesn’t make any sense to me,” says Spivey.

Brittain countered that he understood the circumstances around the venue rental differently.

“I think the situation is the Salt Lick doesn’t want to deal with Jean Spivey. They only want to deal with Scott Marshall,” he said. “Some people in business, they want to only deal with who they want to deal with. That’s how it turned out. From what I understand with my meetings with the Salt Lick, they’re planning on developing some of the areas we utilized for our festival. We’ve made arrangements to utilize some of our other friendly property owners nearby for things like remote parking and staging areas for our equipment.”

[Update, 4pm: After this story was published, an account executive for Giant Noise public relations, which represents the Salt Lick, updated “Playback” to say that the venue’s Pavilion has only agreed to host the Driftwood Music Festival for 2018 and that festival organizers are working out logistics to move it to nearby properties. It’s logical to infer that DMF could change festival dates at that point since it would no longer be constrained by the availability of the Salt Lick grounds.]

Spivey says Marshall is under contract with Old Settler’s through April 2018 and takes umbrage with him planning a competing event while working as director of operations.

“I do know, because you can check these things, that the Driftwood Music Festival name was purchased in April of this year, that the Driftwood Music Festival website was purchased in the end of July, and that it was incorporated as a for-profit festival in the middle of July – all while Scott was still under contract with Old Settler’s,” she outlines.

The domainmonger.com website confirms that the URL for the Driftwood Music Festival was purchased on July 27 – before Old Settler’s went public with its relocation. Spivey points out that Old Settler’s exists as a “not for profit” corporation, donating part of its proceeds to charitable causes like music scholarships and disaster relief.

“[Driftwood Music Festival] is a for profit corporation, so it’s not the same as Old Settler’s,” she points out. “It’s a different animal.”

None of this dampens Spivey’s excitement for the new, larger space, which she says will have more breathing room for campers and festival goers. Rather than growing the event, she wants to make it more comfortable for attendees. Of course its booking just became more competitive.

“This will have an impact undoubtedly and I’m thinking strategically how to book the festival,” she offers. “It all depends on what they do, but I already have acts booked.”

Brittain confirms that DMF has hired a talent buyer and is currently booking their festival. He says the event will feature a similar amount of performances from “national level artists mixed in with some A-artists.”

Neither Old Settler’s nor Driftwood Music Festival have announced lineups or made passes available for purchase. And yet, with this bizarre situation where the audience is forced to choose the genuine event they should be loyal to, the easiest deciding factor is which festival can book OSMF’s signature musical offering: Shinyribs.

“We’re not gonna force a bidding war,” retorted Shinyribs frontman Kevin Russell by phone today in Washington D.C. – revealing that he’s received booking offers from both parties. “That’s what more shrewd artists would do. I feel like the parents are getting a divorce and they’re short on details, so it must be my fault.”

Serious for moment, Russell says he doesn’t like artists being put in a position to choose between the two.

“That’s not fair to us, and they put their customers in the same position,” he says. “They just seem a little immature at this point. Come on y’all, I understand you want to split, but just do it at different times of the year. Then you create more work for the artists and your employees.