A stoned soul picnic of Rolling Stones for Wattser

A storm pounded St. David’s North the night my son was born in 2014. The electrical system buckled on our way with him to the Neonatal Intensive Care Unit. Near midnight last Friday, Margaret Moser died during Hurricane Harvey. Email from a concerned friend the day before summed up these life and death events: “The storm is threatening.”

“Jesus, you S P O O K E D me,” I wrote back the next afternoon, Friday, Aug. 25. “Only one person speaks to me regularly in Rolling Stones.”

Margaret Moser and I met cute inside the current Chronicle offices not five feet from where I sit 25 years later – an office nerd moment between two voices on opposite sides of a cubicle wall. Name the female lead of Re-Animator! Gore bonded us as instantaneously as lightning, but we both already belonged to a darker force. 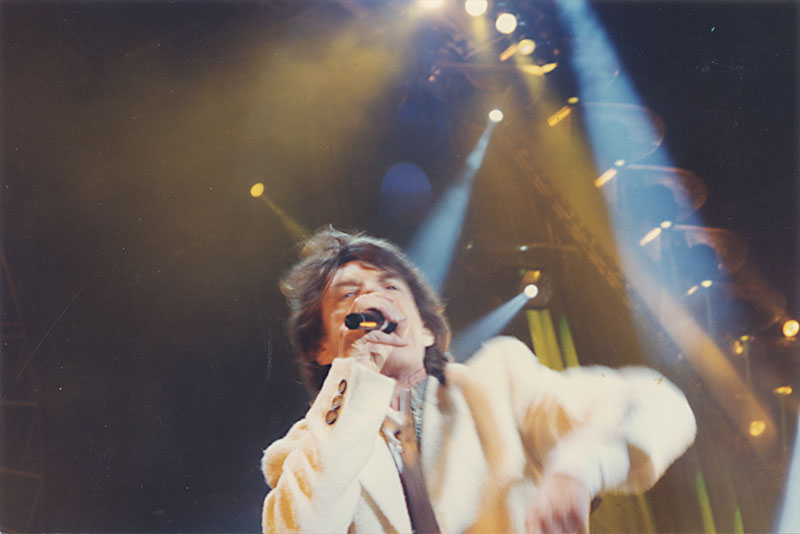 Mick Jagger onstage at the Meadowlands in New Jersey, 1997 (Photo by Margaret Moser) 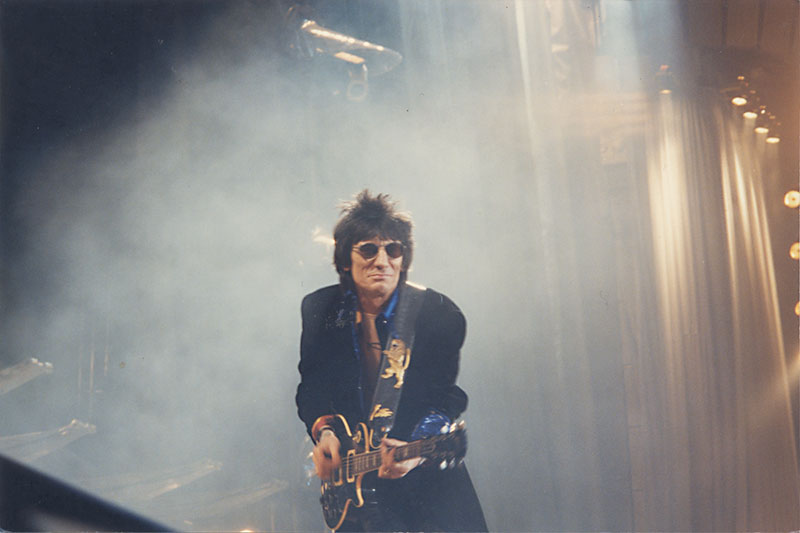 Our first Stones show together rolled the Voodoo Lounge tour stop in San Antonio on Nov. 5, 1994. A caravan of locals hauled down to the Alamodome, with most of us landing at Margaret’s nearby hospitality suite beforehand. Over the next dozen years, she and I hit every single Stones show in the state and then some, like the time the band’s PR flew us first class to the Meadowlands in order to preview a show in Ft. Worth. A photo pass provided my partner in the “Paint It Black” arts with the thrill of a lifetime.

The most memorable spectacle proved Oklahoma City in 2003 to see the Sixties bangers crack the whip to Chuck Berry’s “Route 66” on Route 66. We choked down mushrooms, just the two of us, in a nearby motel room as The Sopranos played on TV without either of us ever having heard of the show, minds blown by a sequence of someone being run down in the woods and killed. As our reality began to bend, we tried to blend in among the locals at a hockey arena.

Margaret and I once pledged that, upon the physical transcendence of one of our deities – Jagger, Richards, Watts – we’d fly to whatever destination to bend the knee and bow our heads.

To our near incomprehension, the press row butt up against the catwalk Mick Jagger soon pranced down. Before the lights went out, in full-on freak-out mode, I clamored up her shoulder like a chinchilla. Margaret could soothe bears.

Ironically, the one pageant we stood each other up on occurred right here in the live music capital, at Zilker Park on Oct. 22, 2006. Both of us attended, s’il vous plaît, we just didn’t confab about it until the next morning at the office. That singular Sunday in Austin music history proved a certifiable blur for locals given the surreality of the World’s Great Rock & Roll Band™ performing right in their own backyard. 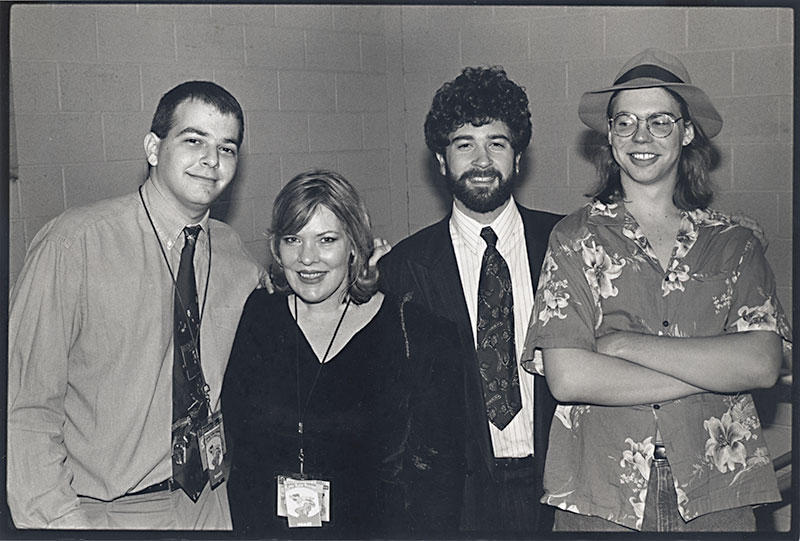 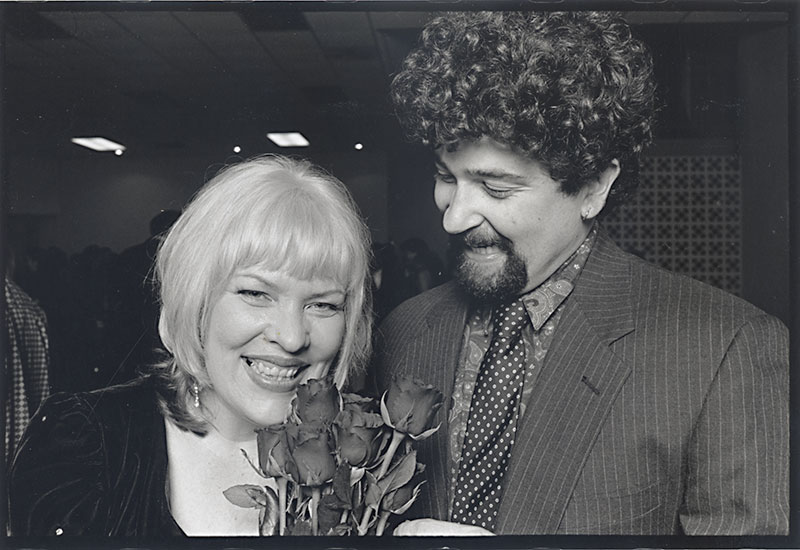 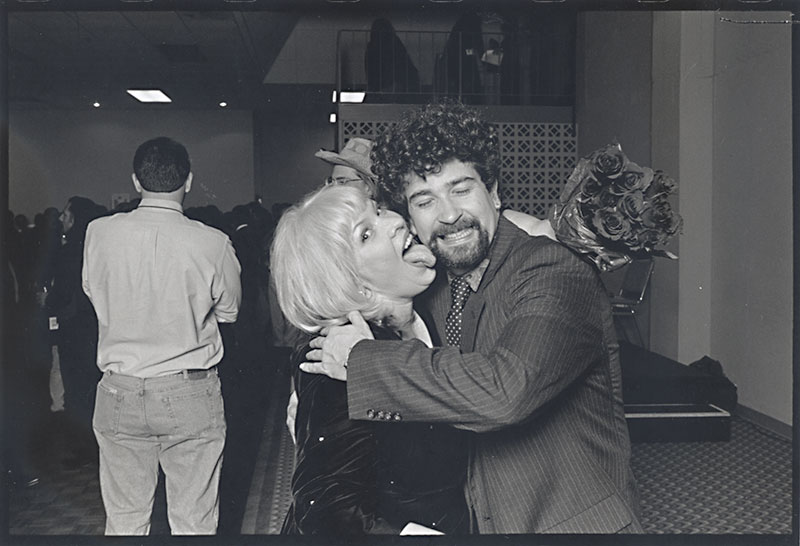 Spring 2013, around the time Margaret received a stage III cancer diagnosis, we tried to pull together a trip to her native Chicago to witness the 50 & Counting Tour, whose North American leg didn’t venture farther South than that or D.C. Two years on, June 2015, we hoped to rendezvous at Arlington with our respective spouses, but she couldn’t manage the stairs to a space station such as Cowboys Stadium.

One of the last things she said to me this June was that she wanted me to man an all-Stones playlist for her self-planned wake at Antone’s later this fall.

When Chronicle publisher Nick Barbaro fractured my nose in one of the paper’s volleyball death matches (“I told you to hit your deadlines”), I wound up at Brackenridge Hospital for emergency surgery to stop the hemorrhaging. Like the marble lions guarding the New York Public Library, the paper’s guardians at the gate – Margaret and Marge Baumgarten – came to see me. The former brought me a copy of Watership Down because my family had owned rabbits and she already called me “bunny” anyway.

Ever after, adapting the two main characters’ names, she addressed her emails to me as Keef-Ra while signing them Wattser. Equally often, the handle came back Monkey Woman 2, her spirit animal line from “Monkey Man,” which inspired an epic Austin video. 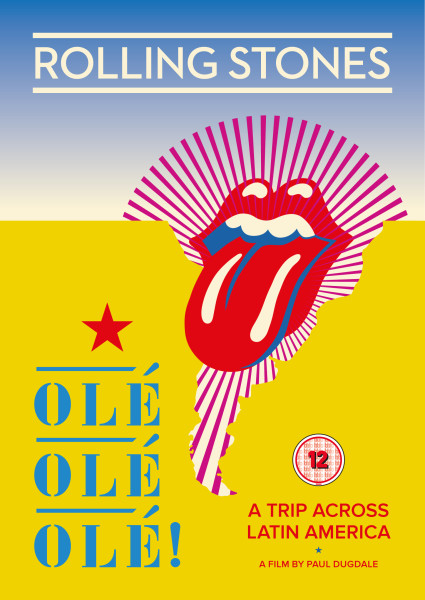 “Monkey Man” makes a notable cameo toward the end of new DVD Olé Olé Olé! A Trip Across Latin America, which follows the Stones’ South American exploits last year. Ten cities in 100 minutes with another hour of isolated performances adds up to one of the most genuine documents on the UK septuagenarians. Real or staged, the singer and Keith Richards bond as if the last three and a half decades of fussing and fighting beginning in the mid-Eighties never happened. Their acoustic duet on “Country Honk,” solo and backstage in Uruguay, stirs embers still glowing from LP sponsor Let It Bleed.

Brazil lends a samba to “Sympathy for the Devil,” then downpours on the Stones the same way one concert at the Cotton Bowl nearly washed Margaret and I away while hollering “You Can’t Always Get What You Want” in a deluge. A mariachi band reinvents “Happy” ahead of its author shedding tears in the face of an ovation in Mexico City not heard since the Aztecs adored their gods. Obama and the Pope both nearly derail the band’s debut in Havana, which spines the narrative to a happier conclusion than a similarly problematic free show in Gimme Shelter. 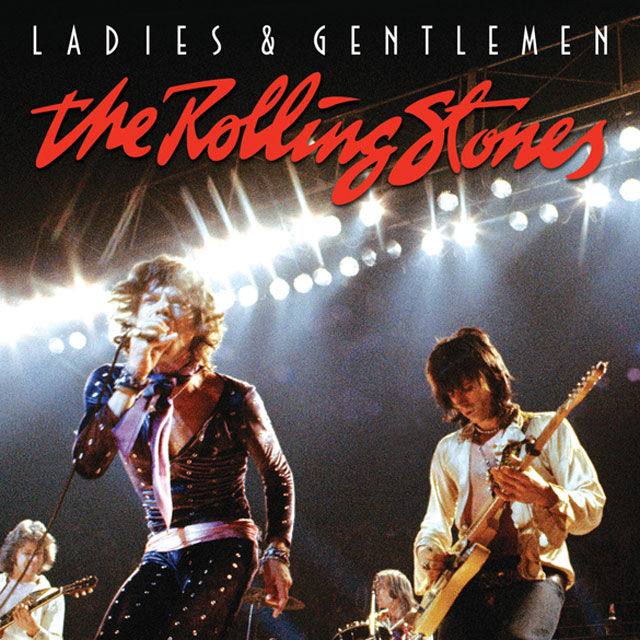 In fact, a trio of recent CDs mark the official debut of audio soundtracks to some greatest hits Stones cinema. Ladies & Gentlemen, the Rolling Stones, mixing and matching four shows from Ft. Worth and Houston on 1972’s Exile on Main Street promotion, capture its principles ragged but right. “I remember the Rolling Stones being, sometimes, very lackadaisical – a very sloppy band onstage at this period,” admits Jagger in otherwise nonextant liner notes, but onscreen the soundtrack crackles. Yet divorced of the visuals, the show itself isn’t particularly notable.

That said, Mick Taylor’s leads still shoot the moon, shit-hot and molten. The horn locomotion driving “Bitch” originates in the Texan horn duo of Jim Price from Midland and Bobby Keys from Lubbock. A particular film highlight, Mick and Keith exploding together on one mic during “Happy” leaps off the disc, and “Street Fighting Man” ignites to close. 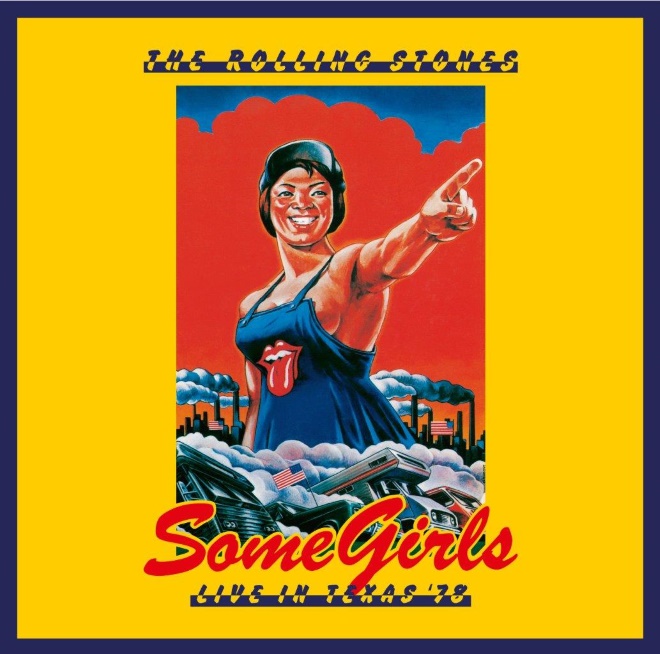 Six years later, the bad boys returned to Ft. Worth on the Some Girls pillage, far tighter and with a pristine sound mix both on DVD and now CD. This time, it’s Ronnie Wood supplying slashing slide (“All Down the Line”) and straight-edge leads and solos (“When the Whip Comes Down”) alongside fellow ex-Faces hair spike and future Austinite Ian McLagan on keys. A definitive lope to “Beast of Burden” practically melts atop Wood’s and Richards’ guitar weave, as radioactive a string-bending as whatever chemical cocktail they doubtlessly consumed beforehand.

Seven consecutive songs off Some Girls make their respective studio versions sound like demos. As heathen as Get Yer Ya-Ya’s Out still spins from the Let It Bleed tour, which in 1969 redefined North American arena production, Some Girls: Live in Texas ’78 bests it with an altogether more lethal axe duel and whether fast (“Shattered,” “Respectable”) or slow dance (the Temptations’ “Just My Imagination,” “Far Away Eyes”), the band skins alive all tracks rhythmically. 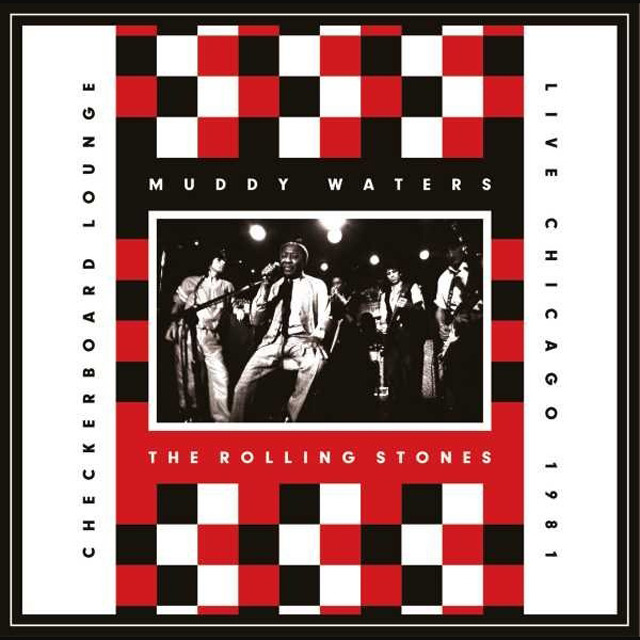 1981’s Tattoo You tour suffered from heart-palpitating tempos, but that wasn’t an issue on the night of Nov. 22, 1981, when Mick, Keith, Ronnie, and Ian Stewart sat in with Muddy Waters at Buddy Guy’s club in Chicago. As heard on Live at the Checkerboard Lounge, the king of the blues and his band do the heavy lifting, but the Stones inject undeniable verve to the proceedings beginning with the bandleader trading verses with Jagger on “Hoochie Coochie Man.” Guy and harp great Junior Wells distinguish a 10-minute take on “Mannish Boy.” Four songs orbit the same length, including Guy’s skyrocketing “Next Time You See Me.”

Margaret and I once pledged that, upon the physical transcendence of one of our deities – Jagger, Richards, Watts – we’d fly to whatever destination to bend the knee and bow our heads. The night she died, after fulfilling the responsibilities our profession demanded between 2-4am, I killed the lights, lit a candle, and scrolled through her favorite Stones album on my iPod – Let It Bleed. First “Gimme Shelter,” then “Monkey Man,” “Love in Vain,” and finally choral closer “You Can’t Always Get What You Want.” Outside, storming remained low grade. At 4:44, my eyes called the long and terrible day to a close.

Oooo, the storm is threatening, My very life today. If I don’t get some shelter, Oooo, yeah, I’m gonna fade away.

Last time I saw my Stoned soul mate, she gave our 3-year-old a plastic Watership Down candle. Lazlo treats it with reverence and knows who gave it to him. When we lit it up last Saturday morning as the storm intensified, he asked, “We going to see Margaret?”

No, baby. Not today. 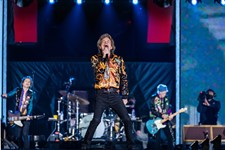 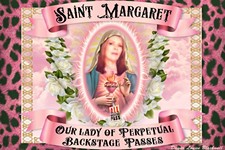 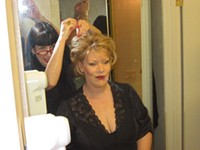