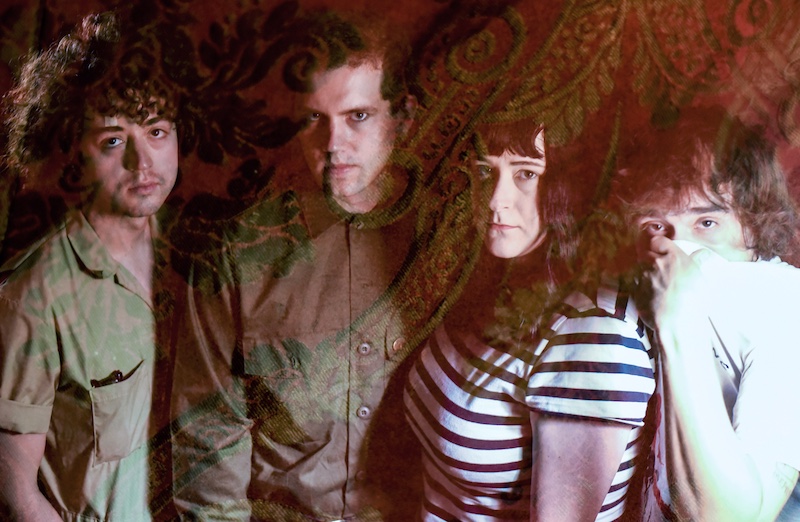 Frontman Victor Ziolkowski, 25, proved mellow and polite on the phone in contrast to his unhinged stage presence.

Austin Chronicle: How did Plax come together?

Victor Ziolkowski: Chris [Stephenson] from Spray Paint and Michael [Goodwin] and Marley [Jones] from OBN IIIs had been getting together. They had an idea for a sound and about six songs already formed when they asked me to try some vocals. It’s funny because Michael described the band to me by listing some of their influences and I wasn’t familiar with any of them.

So it was me hearing what they’d already formed and doing what I do on top of it. I appreciate all the guys for having the vision, putting all the work in, then giving me an opportunity to try something new. They’ve made a sound that’s unique and not easy to pinpoint. That’s what I always set out to do.

Drums have been my primary instrument. I front the band Skeleton, but this has been a different approach because I didn’t write the music. Michael gave me some pages out of his journals, stream of consciousness writing, and said, “If you want some ideas, you can just sing these lines.” I used them as random lyric ideas, then found themes or a story and went from there.

This band’s opened doors to how I write and has been very welcoming in letting me do whatever I want to with the vocals.

AC: On Clean Feeling, I hear elements of all the members’ other work: nervy sounds from Spray Paint, tough rock & roll of OBN IIIs, and the DIY hardcore you’ve created in Skeleton.

VZ: Originally, a lot of Euro post-punk references were being tossed around by the band. Then it formed into something really their own. Bringing me in without much of an idea of what they were going for probably gave it a different spin. I often question if my part of the band is what everybody envisioned, but they’ve been very open and into letting it become its own thing.

AC: You’re a young guy, but you have a long history and lineage in Austin music beginning with your father.

VZ: Well my dad [bassist Vic Gerard] has been a longtime member of the Austin music scene for sure. He got me my first drum kit, a miniature set, when I was 2 and my parents put sticks in my hands. I would go to all my dad’s shows in bands like Two Hoots & a Holler, the Derailers, Chaparral. He’s brought me up as a working musician in town. You can see him playing almost every night of the week with someone. That was my introduction, growing up in this roots rock, country Austin music scene.

I had my first band at 8 with Misspent Youth, and Margaret Moser and the Chronicle played a huge part in keeping that band going. I’d really like to recognize her for supporting the path of me and my little brother [David Ziolkowski]. He and I, growing up, would play any instrument together around the house. Later, we did that in bands. There’s been at least one band where we each played every instrument. I think all the time how fortunate I was to grow up in Austin and what a special town it is for music.

AC: What does your dad think of you in the role of growling punk rock frontman?

VZ: [laughs] I think maybe it took him a little bit to come around. I don’t know it’s the path he necessarily envisioned, but he’s always encouraged me to write my own music, so I think he’s happy I’m doing my own thing – carving my own path out.

Something that’s funny is how I have two sides to what I’m often doing. I have my bands that are more in this punk vein, then the next night I’ll get hired to play rockabilly drums with Rosie Flores or someone like that. I feel like I get thrown back and forth between different worlds.

AC: Many musicians here can’t see past their own scene. Most people who play at Hotel Vegas have no appreciation for what’s going on at the Continental Club and vice versa, but they’re both equally important.

VZ: In Austin there’s so much going on that every night of the week you can see something awesome if you’re open to it. Some people like to stay closed in the world that they know. That’s something I’m looking to explore more, branching out into different styles, genres, and scenes, and working to bring them together.

AC: I look forward to the DJ Victor EDM set.

VZ: That may be sooner than you think!

AC: What’s coming up for Plax?

VZ: We have a three-week European tour coming up and a release/tour kickoff August 18 at Barracuda. Samantha Wendel from Crooked Bangs is playing guitar for us now [since Stephenson moved to Australia]. I can’t stress how thankful we are to Richard Lynn and Super Secret Records for putting out our record. They’re a very supportive label that’s made things possible for us and a lot of bands in town. We’re stoked to be on a local label as well.

Stream “What a Waste” by Plax: