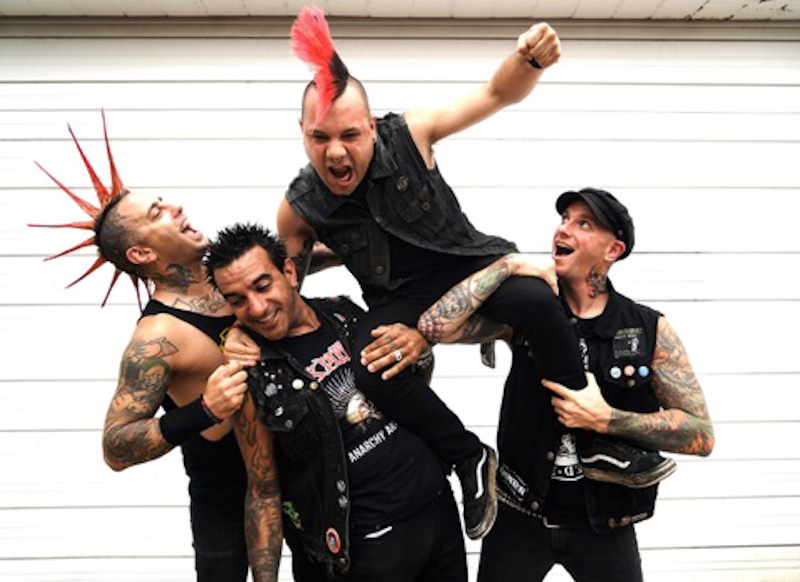 That’s a big pair of boots to fill. Not to worry, though. The liberty-spiked local, with a chipped front tooth and a distinctive snarl, became an illustrious character in punk during the Nineties.

As such, Rodriguez – sometimes known as Dave Tejas – remains a dynamic frontman with a strong voice and combustible stage presence. He dives right in with the Casualties on a 13-date European tour next month, followed by 23 U.S. dates opening for Charged GBH, including an Austin gig at Mohawk August 31.

Austin Chronicle: Tell us about your history with the Casualties.

AC: If you tour with someone, you see the best and worst of them. You must have made a good impression on the Casualties if they’ve asked you to sing for them.

DR: We’ve been friends for years, the kind of buds where if someone passes away in the family or there’s girlfriend stuff, they’ll say, “Come to New York,” or I’ll say, “Come to Austin.” About a year ago, “Meggers,” the drummer, wanted to get out of New York for a little bit. I said, “Dude, I got an extra room at my house,” so now he stays here when he’s not on tour.

This [band transition] was abrupt, but it’s been in the mix. It just happened faster than they thought. I kind of put my foot in my mouth, because we have the same booking agent and I said, “I hope they find somebody who cares about every single word, like I care about with Starving Wolves.” Our booking agent was like, “Y’all are best friends, why don’t you just do it?”

I said, “Well, I’m finishing up this record with Starving Wolves, so I don’t know.” Our agent told me to just do vocals at the festival in Tulsa last weekend. It went over so well that the guys we’re like, “What do you think?” I said, “Let’s give it a shot.”

AC: Did you sing the whole set with them at the Fuck You We Rule OK! festival?

DR: Uh huh. They asked me, two days before we left to go to Tulsa, if I could learn a couple songs. I said, “Yeah I could maybe learn four or five.” Then they sent me a text message with 14 songs on it.

We had a 45-minute practice in somebody’s hot murder shack in Tulsa, where we went through the songs once. They were like, “You got it,” but I was over here shittin’ my pants. “I don’t! I need to practice!” But it was cool.

AC: Jorge is a legend in the street punk scene. How do you approach stepping into this scenario?

DR: That’s a huge thing, because Jorge is a good friend of mine. I remember when For the Punx and Underground Army came out [1997 and ’98, respectively]. The cool thing was just that fuckin’ raw voice! There was nothing pretty about it and that’s what drew us to it.

No one is saying, “You have to do it like this,” or, “This is what Jorge does.” They’ve been like, “You do your thing. That’s why we want you, because you have your own persona. We don’t want a Jorge number two.”

The way I perform is a total 180 from the way he does. I’m more of a running all over the place, jumping in the crowd, jumping on the crowd performer. And that’s the thing about the Casualties. They’re a band with the crowd.

I’m a huge Austin [booster] and Austin is a very incestuous, in-your-face kind of city with music, so when I play, I like to play with the crowd and make it a whole family affair. I think that’s also the Casualties’ feel, so we’re going to have a real good time doing that.

AC: Talk about being thrown into the fire, you’re going to Europe with them right away.

DR: You know, first show is Rebellion Festival and it’s like 5,000 to 10,000 people. Then, the first American show is Not Dead Yet Fest with Rancid and the Dropkick Murphys. We’re one of the headliners, so I’m like, “What the fuck am I doing?”

I’ve got to be careful what I ask for, because my whole life all I’ve ever wanted to do is be touring so much that it’s all I do. I think this year is going to be that.

AC: How are you preparing?

DR: I have to give myself a swift kick in the ass. I grew up with, “Don’t let them see you sweat,” but when we got back from Tulsa, everybody got sick. So I’ve been sick for the last couple days and I’ve got to get on top of this. I know the songs, but when you don’t have a net of someone else singing it, it’s totally different. Right now, I’m going to Music Lab by myself and plugging in my phone, and singing to the music. I should be trying to run, because at European shows the set’s an hour long.

AC: Do you think it’s significant that you’re Latin-American?

DR: I think it is. Jorge is from Ecuador and [bassist] Rick [Lopez] is Puerto Rican. It’s one of those things that, again, it connects people in a different way. I call myself Texican, ’cause we have our own kind of style. When the press release went out on Tuesday, I hadn’t followed it because I was sick and felt like someone had kicked me in the balls. When I looked at some stuff later, people were actually stoked that [pronouncing it with a heavy Spanish accent] Rodriguez is stepping in. They’re known for having that vibe.

AC: Do you have any sense of whether it will be a temporary or permanent situation?

DR: What we want to do is go on tour together, have a good time, and see what happens. I know this can’t be comforting to them because they’ve been all together for 25 years. Rick’s the newest member of the band and he’s been in for 20 years! I remember when Krum Bums were breaking up, it was really stressful. What am I gonna do? What’s gonna happen? Am I gonna bounce back?

So with me being friends with them for so long, we’re saying, “Let’s just go do this tour together and remember why we started doing this in the first place.” That’s what feels so good about this.