In revisiting The Joshua Tree, the Dubliners return home

Released March 9, 1987, The Joshua Tree topped U.S. charts, sent “With or Without You” and “I Still Haven’t Found What I’m Looking For” to the same spot, and eventually sold at least 10 million copies here and triple that worldwide. The tour comprised 111 shows in three legs over nine months. A fourth leg from U2 landed its sixth show in Houston Wednesday night. “Every Song. Every Show.” That’s the current tour slogan lo, these 30 years later. Back then, some 3 million ticket buyers witnessed most of the album performed live, in addition to early catalog deep tracks and B-sides including the likes of “October” and “Party Girl,” both out next week as part of a 1987 Madison Square Garden concert bulking up the disc’s 30th anniversary box set. “Red Hill Mining Town” never turned up anywhere – until eight days ago in Vancouver.

Originally scheduled as the second single off The Joshua Tree, with a video directed by Neil Jordan (The Crying Game, Interview With the Vampire), the Irish quartet instead followed up “With or Without You” with its second straight No. 1 in “I Still Haven’t Found What I’m Looking For” and pulled “Red Hill Mining Town” from live set lists because its anthemic high note in the chorus shredded Bono’s voice. They’ve reportedly “remixed” (read: “replaced”) his vocal on it for the new LP remaster, matching the frontman’s delivery of the song on this two-leg, 33-show revisitation of U2’s high-water mark.

Yours truly trekked some seven hours round trip expressly to experience “Red Hill Mining Town,” whose muted, almost unplugged-sounding delivery at football hall NRG Stadium sank where it should’ve soared. Likewise, sweeping album opener “Where the Streets Have No Name” and the dive-bombing “Bullet the Blue Sky,” which bookend the long-player’s top-spot songs on the first side, rose to no particular occasion, mostly rote instead, perhaps due to their relative ubiquity in the Dublin foursome’s live canon. In fact, only after the landmark quartet of tunes that begin the album played out did The Joshua Tree actually come to glorious life.

On wax, “Running to Stand Still” concludes the A-side of the desert R&B classic, in many ways the best composition among far more famous radio staples. Addiction cautionary, its stark, steely, steady ascension also blips notes its singer can’t readily hope to revisit, but deep in the heart of the Lone Star State’s most diverse urban center, Bono projected it with passion, clarity, and hope. His words chill unabated:

“You know I took the poison From the poison stream Then I floated out of here Singing ha la la la de day.”

There it was. That was it – Eighties U2, a galvanizing force able to still with whispers, not simply move masses with coliseum rockers. “Red Hill Mining Town” never stood a chance after that. 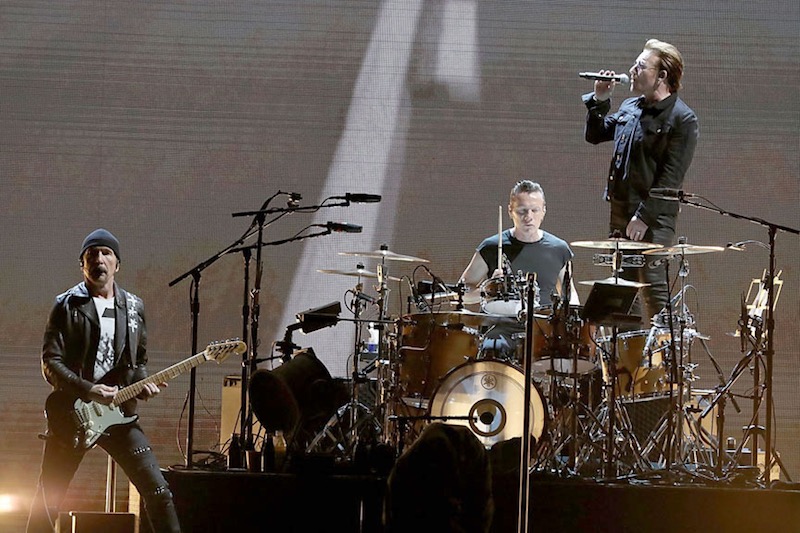 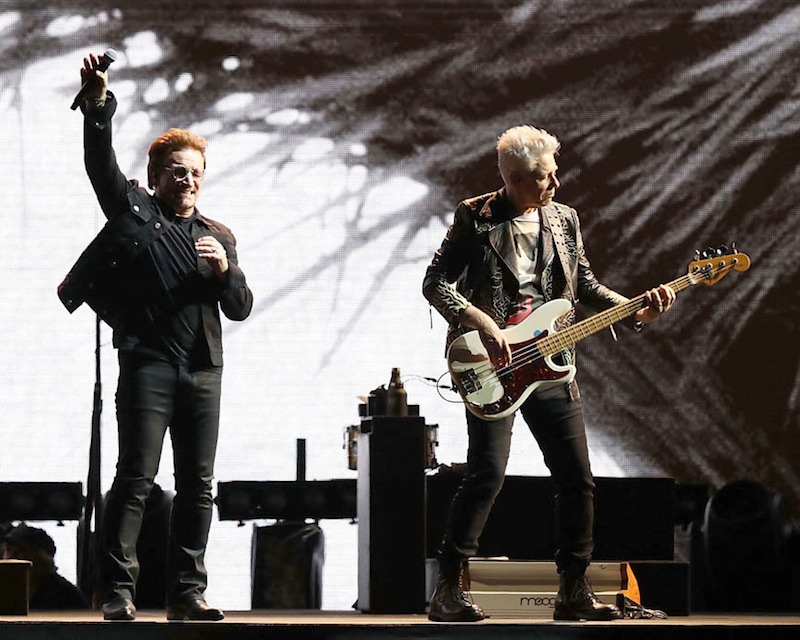 For their part, succeeding trio “In God’s Country,” “Trip Through Your Wires,” and particularly “One Tree Hill,” dedicated to Manchester (“no end of grief means no end to love”), skittered and honked (in Bono’s “shite harmonica playing”) and shimmered, respectively, all three cuts alive and well with idealism, realism, and sheer songwriting fortitude. MTV, Live Aid, and even the IRA all came rushing home in flashback, U2’s winking nod to the material’s original debut including Bono holding a spotlight on guitarist Edge and later donning some western wear, both visuals from the band’s hubris-decried big screen doc Rattle & Hum.

Where “Bullet the Blue Sky” once rained down American imperialism on the southern half of the continent in an apocalyptic Hendrix guitar mangle, three decades later Joshua Tree closers “Exit” and “Mothers of the Disappeared” now represent global massacre and refugee-ism with a destructive verve, volume, and ultimately meditative unease. Bono’s past proselytizing keeps in check currently with a football field-sized screen doing most of the work in words and images. In re-creating their Grammy winner for Album of the Year, the Emerald Isle’s four former punks all clustered within a foot or two of each other at founder and bandleader Larry Mullen Jr.’s drum riser throughout most of the album cycle.

Era intro and hits outro girding The Joshua Tree for a total runtime of two hours, only The Unforgettable Fire’s chiming “Bad” and a stadium-shaking “Elevation” matched the emotional see-saw of the evening’s core. “I Will Follow” should’ve rounded out encore two, with Achtung Baby’s “Ultraviolet (Light My Way),” here transformed into a “herstory” ode complete with a long, warm Bono and Adam Clayton embrace, then kicking down into the finale. If U2’s superstardom contracts to a far more human level contemporarily, so has The Joshua Tree, but its message of home in all its guises resounds eternally in a time of mass disturbance.

U2’s show Friday in Arlington is sold out.

“One” “The Little Things That Give You Away” Space Odyssey
Planet U2 touches down in Houston