Come one, come all to “Vacationland” 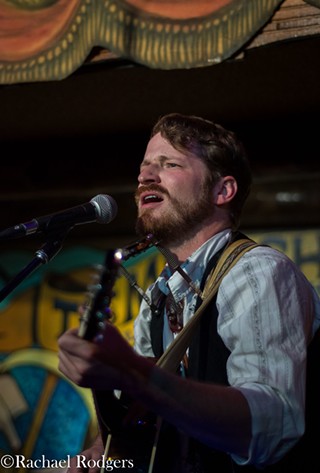 Inside what resembles a vaudevillian squat party, complete with a juggling accordionist, a mental patient pounding a burning drum kit, and some lanky shadow man honking out trombone solos, there’s Austin’s Garner Sloan – decked out in a ragged tuxedo with grease paint staining his eyes – barking followers toward a supposed paradise.

“The song is about entitled people who believe they have it really bad. Then this guy comes along telling them, ‘There’s a better world out there, follow me, leave all your worries behind,’” explains Sloan of the track behind his new “Vacationland” clip. “Well, he takes them to this hell hole where they soon realize that they had it a lot better in their original lives.

“I wrote it because I was sick and tired of people complaining when they don’t understand how shitty other people have it in this world.”

“[‘Vacationland’] was shot at this abandoned strip mall by Highway 183 and MLK Boulevard. We had to sneak in at the middle of the night so we wouldn’t get caught,” says Sloan of the all-night shoot featuring himself and collaborators Amanda Kitchens (accordion), Eddie Dickerson (fiddle), and Derek Hanson (drums). “We got lucky because there was a Burger King right there, but the drive-through was closed. If the drive-through was open, they could have just sat there and seen the whole thing.

“Of course, a few of the Burger King employees came and watched us, and took pictures on their phones.”