George Reiff, the beloved Austin bassist whose masterful, in-the-pocket playing was a fixture on the local scene and a talent beheld by artists of international acclaim, passed away Sunday at the MD Anderson Cancer Center in Houston, friends confirm. Reiff, just 56, succumbed to a 10-month run-in with cancer of which there proved no escape. He was diagnosed last July with stage IV lung cancer that had spread to his liver, bone marrow, and brain, ushering an outpouring of monetary and emotional support from artists near and far who loved and respected the easygoing musician. Michael Reiff broke the news on his brother’s GoFundMe page last Saturday that George had suffered at least two strokes during a recent cancer treatment, preceding a fast decline in health this past week and weekend.

While he wasn’t well enough to play at the Austin prom last March during South by Southwest, readers voted him as the city’s Best Bassist in the Austin Music Poll. He was also honored with a special “Jack-of-all-Basses” Critics Pick in the 2016 "Best of Austin" awards. For that, he was deemed “the richest man in town” for all the love the community held for him.

A true linchpin of the capital city music scene, Reiff also operated a studio out of his North Austin home where he produced albums for artists including friend and frequent collaborator Ray Wylie Hubbard and Austin breakouts Band of Heathens. He also helmed Shinyribs' 2014 favorite Gulf Coast Museum, several discs for the Mastersons, and works by rising artists like Lincoln Durham and the Beaumonts. As a producer, Reiff delivered in all key roles: mentor, collaborator, confidant.

When family friend William Harries Graham, in a Chronicle feature, asked the man he’d known all his life what advice he had for young musicians, Reiff replied:

“Don’t ever stop trying to improve. Don’t ever let opportunity go unused. Build up your set of skills, whatever they are. Polish like a diamond and work hard. You’ll be rewarded. And always believe you deserve everything you have coming your way.”

The announcement of Reiff’s illness last summer spurred many a fundraiser and tribute concert. Since then, he was a rare sighting onstage. The final time this writer saw him with a bass strapped on was at Monkey Nest Coffee last November for photographer Todd V. Wolfson’s love-in honoring singer Savannah Welch, who lost her leg in a freak accident.

At the informal jam, Reiff powered through the two-hour song swap, standing out as he always did. He played with immense feeling, adapting fluidly to the different songwriters’ styles and making everyone sound better. As always, he exuded the friendly, personable vibe that made him one of the most beloved characters in Austin music. 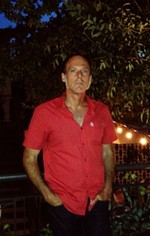