I Love You, Jimmy

As midnight neared Thursday at the every-last-seat-sold Paramount Theatre, Jimmy LaFave’s 10 minutes onstage turned the show’s refrain back on his flock: “I love you all. Thank you so much. I love you.” Amid tears hours earlier, writer Dave Marsh recognized the evening’s jubilation not simply as a pledge by Austin to LaFave but more so his dying wish for us. 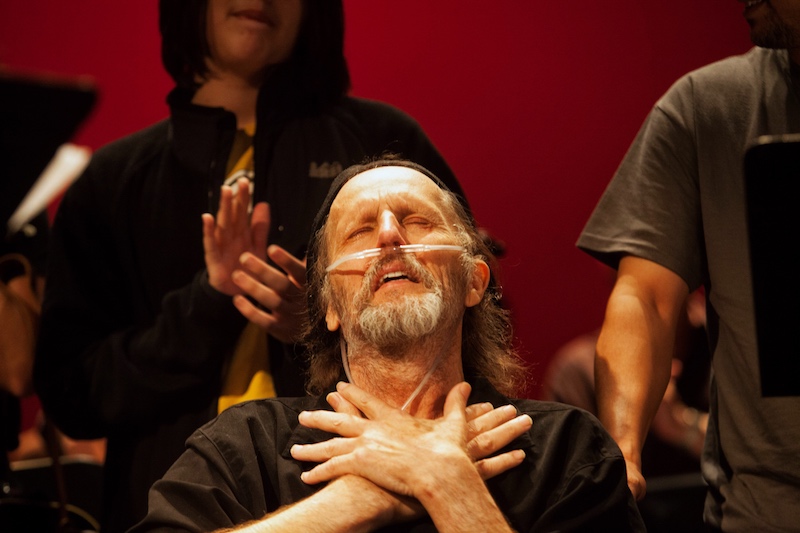 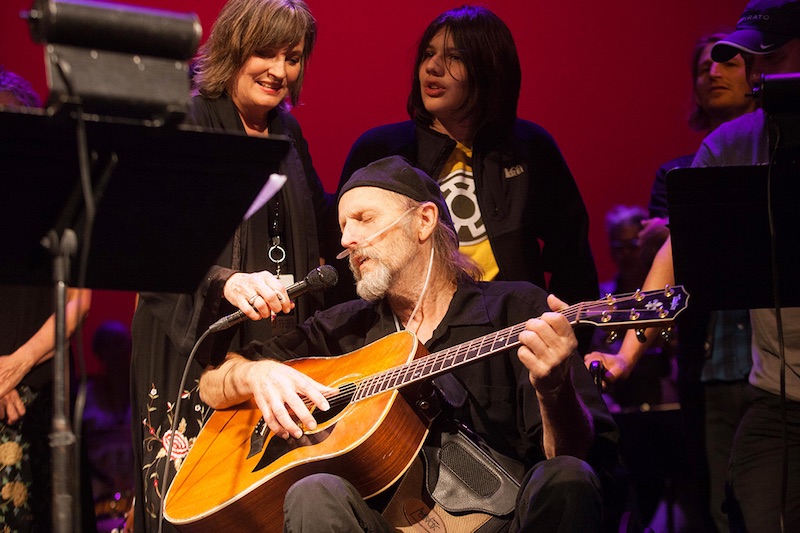 As the world devolves into tribalistic hostility, dystopia finally decamped on our doorstep, mankind still hasn’t split the intraspecies atom separating any part of itself from another. Kill, maim, hate – any maniac can perpetrate genocide – but even the damned have mothers, fathers, pets. No one gets out of here alive and that exact same number can’t escape personal loss any more than they can stem the 4.3 new humans occurring every waking second on Earth.

Life and death tethers us all together whether we acknowledge it or not. All communities celebrate and record births, and when the other side of the scales adjust to balance that out, all commonwealths mark death and even fete it. There exists one sole fabric that can’t be rent.

“This show is Jimmy’s gift to you,” announced one of its organizers and strongest voices, Christine Albert. “Every choice made at this concert was Jimmy’s wish.”

Letting go of someone may gut you one scintilla less when that person expressly aids those around them to that end. Jimmy LaFave, terminally frail in a wheelchair as he led a standing house in “Goodnight Irene,” allowed some 1,300 music fanatics of his adopted hometown to say their goodbyes to him, while making a last request of them that consumes his heart more than even cancer. A sharp pair of eyes would’ve already spotted that precious concern – 15 a week ago today – standing behind him among a chorus of some 50 strong.

“This is my son Jackson,” cried LaFave. “Take care of him please. I love him so very much. Take him into the community and nurture him.”

Not even Sarah Lee Guthrie reading an essay by her grandfather Woody Guthrie – LaFave’s north star as a writer, performer, interpreter – about the only thing that matters in this world could prepare anyone for the stark reality of the concert curator’s ultimate plea. Neither could the pronouncement made by nearly every performer after almost two-dozen song offerings: “I love you, Jimmy.” If it takes a village to raise a grownup, at least 1,300 Austinites will never let Jackson LaFave’s feet touch the ground. His serene smile and preternatural teen beauty reflected all that came before, not one minute of it funereal.

Open an artery and what flows out does so thick and saturated in shades of red rarely produced anywhere else in nature. Jimmy LaFave practically invented that key, and many of the goose bumps raised last night, all night tapped that vein, beginning with Albert in the third slot – one song and off by every artist as paced by teddy bear emcee Jody Denberg. Each one looked down to a stage-front section of LaFaves sitting around their ailing focal point and said their “peace and love,” to quote Guthrie.

Ellis Paul’s climbing tenor evoked LaFave’s pleasingly so on “I Ain’t No Jesus,” a tune from his new album. Far from fielding a hootenanny of all LaFave material, the playlist maker assembled a masterful mosaic of old and new, his and theirs, as spined by Guthrie, for whom many (LaFave, Eliza Gilkyson, Slaid Cleaves) had spent a dozen years on the road spreading his gospel. Tish Hinojosa and Abra Moore dusted off siren songs that had prompted LaFave to fold them into his creative harem.

Sarah and Cathy Guthrie, Arlo Guthrie’s daughters, hushed a reverent yet uplifted audience experiencing a once-in-a-lifetime emotional rollercoaster of a show with their grandad’s “Hobo’s Lullaby.” After a 90-minute first set and intermission, Slaid Cleaves’ “This Morning I Am Born Again,” a co-write with Woody Guthrie that LaFave famously facilitated, rang a similar gravitas. Gretchen Peters covered LaFave covering her, the two compositional voices now inseparable in this instance.

Rounding the last bend, raucous gospel from Ruthie Foster raised the roof, as did Marcia Ball’s Jerry Lee Lewis piano pounding for her turn. Hands down, Michael Fracasso summoned LaFave the best, his delicate, tremulous voice eerily evocative of the celebrant. In case the future biopic on Jimmy LaFave can’t secure the rights to his catalog, Fracasso can substitute in a heartbreak.

An inherent femininity in LaFave’s dove-like keen didn’t stop the menfolk from stomping and hollering, whether Kevin “Shinyribs” Russell’s uproarious dance number, or Butch Hancock booming the man of the hour’s “Desperate Men Do Desperate Things” from his 1992 local bow Austin Skyline. LaFave’s Okie roots glowed ginger in John Fullbright at the piano. A seven-strong backing band led by Chris Gage and members of LaFave’s band, including guitarist John Inmon and keyboardist Radoslav Lorkovic, ceded most of the spotlight to Aussie mandolin great Kym Warner of Austin’s onetime Greencards.

Every note appeared covered by two cameras, one at either side of the stage, so Jimmy LaFave Songwriter Rendezvous will some day sing of a divine Austin supplicant who pied-pipered the entire female race and many of their attendant dudes to a soundcloud of deep, rich luxury and naked feeling. A decade ago at Auditorium Shores, Stephen Bruton received a similar send-off. Jimmy LaFave’s earned his own seat at the right hand of our maker. 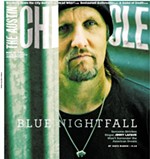