Ten minutes, 20 questions, and 20-plus years of Americana chronicles

March 31, the day before Jim Caligiuri left Austin for California, we said goodbye outside Magnolia Cafe on South Congress. A rare moment of speechlessness overcame me, since editors depend on journalists like Caligiuri – clockwork about deadlines, fearlessly opinionated, physically rugged. “You’re the longest relationship I ever had,” he said.

Come to think of it, the sum total of all my relationships with the opposite sex barely adds up to the 20-plus years Caligiuri and I have churned out copy together at the Chronicle. As with my recruiter here back in the early Nineties, Margaret Moser, when a writer of such caliber up and retires, it leaves a gaping hole in any publication. A replacement for Caligiuri has already flamed out, in fact – in one week flat!

Yet there we were two weeks ago Friday, chronicler and editor, one last time. Caligiuri, 64, arrived appropriately attired in a Grateful Dead, San Francisco ’69 ball cap, and Twangfest 1997-2000 shirt, on his way to crash with some friends in Palm Springs and eventually settle near San Diego. He’d talked about leaving Austin since selling his house in 2014, but after Belize felt a bit primitive in January 2016, the moved stalled. That bought me added bylines, festival coverage, and most critically of all, experience.

Wrapping up a music coverage career stretching back to the late Eighties with the CMJ New Music Report, a trade magazine, and including the creation of an Americana chart in The Gavin Report in 1995, Caligiuri began writing about the nascent offshoot of country and folk music after the Country Music Association approached CMJ about a panel at its music conference, wanting to cross over Nashville twang to the indie rock set. The native New Yorker soon found himself writing a column in the Report and introducing a whole new set to the likes of Dwight Yoakam and Steve Earle. A move to Austin the following year naturally followed that arc.

He tells me I headhunted him, but my only recollection remains being grateful to recruit his expertise for roots music in a state that helped stake the very concept. His two-decade tenure here in the capital included stints at IBM, KOOP, KUT, UPS, but the Chronicle was his constant. He proved mine as well.

Losing a key member of any corps d’esprit weakens that team. Jim Caligiuri’s work for the Chronicle laid a hard and fast foundation for the last 20 years of this periodical’s dancing about architecture (“writing about music is like dancing about architecture,” a musician once mused). Exiting is not only a valued storyteller and marker of history and events, but a comrade in arms.

Austin Chronicle: Where and when were you born, and to what circumstances?

Jim Caligiuri: I was born in Huntington, N.Y., in February 1953. My father was a mailman, my mother a housewife. I had two siblings.

AC: What sort of role did music play in your family growing up?

JC: Pretty big. One of my earliest memories is my mom playing the radio and hearing music during breakfast. My dad delivered mail to a bar that had a jukebox and they’d give him used 45s that we’d play endlessly. And of course there was the Beatles.

AC: One of MOJO magazine’s questions: What was the first album you bought and where?

JC: Cream’s Disraeli Gears was the first one I bought with my own money at Sam Goody in the Walt Whitman Mall.

AC: When, where, and what was your first concert?

JC: This is good. I saw Frank Zappa, Col. Bruce Hampton, and Head Hands & Feet at the Fillmore East in June 1971. It was a Sunday night late show and for an encore, at around 4am, Frank was joined by John Lennon and Yoko Ono. Lennon released some of that on Some Time in New York City.

AC: When and why did you first start writing about music?

JC: I really started writing when I worked at CMJ New Music Report in 1988. It was a small shop and almost everybody did a little bit of something.

AC: Pivotal early piece of your writing that made you think, “This could work”?

JC: Not sure I ever had that moment. I jumped in feet first and just did it.

AC: When did you get to Austin, and what got you here?

JC: I moved to Austin in October 1995. I had been visiting a lot and knew some people here through my writing at CMJ. In June of that year, I came for Antone’s 20th (I think) anniversary and the people I was staying with, old friends from New York, said I could move here and stay with them until I got myself settled. I was tired of New York and CMJ, so I took them up on their offer.

AC: First piece for the Chronicle and the circumstances surrounding your writing for the paper?

JC: Don’t remember the first piece, which might have been a record review. The first thing that got any notice was “The Great Roots Rock Scare of ’96,” about the burgeoning alt.country scene of the time. You’d seen something I wrote in No Depression magazine and contacted me about working for you.

AC: Please list some of your favorite Chronicle pieces over the years.

JC: I like the pieces where I spoke with a few different people and didn’t concentrate on a singular artist. Although the story I did on James McMurtry a couple of years ago was pretty special.

Otherwise, a story in the early 2000s about the jam band and bluegrass scene that was happening then was pretty good. I got to interview people like Randy Newman, John Fogerty, Mark Lindsay of Paul Revere & the Raiders, Elvis Costello, and Kris Kristofferson for the blog when I was doing that. Those were a real treat.

AC: Favorite interview – both in person, and over the phone – and the one(s) that got away?

JC: John Doe of X was the nicest guy on the phone. I interviewed a gaggle of women songwriters in Erin Ivey’s living room a couple of years ago. That was fun.

AC: Over the past two decades you became the Chronicle’s pre-eminent singer-songwriter writer/reviewer. What made that a good fit for you?

JC: I like roots music, so anything folk, country, blues was sent my way.

AC: I can think of at least one local musician who took great umbrage to a negative review you wrote. Were there a lot of those? Ever get accosted in public over one, or a brick through your window? Whatever the case, you were a fearless reviewer – never pulled a punch. What made your armor so thick?

JC: Mandy Mercier had a lot of people write letters to the editor after I wrote a negative review of one of her records. She was one of a few that did that, [along with] Jimmy LaFave, some guy from L.A. who recorded a record in his room in San Jose Hotel that was a joke, Mike Nicolai. I just wanted to write the truth as I saw it. Never got threatened in person, although Randy Rogers called my house after a negative review. I saw him on the caller ID, didn’t answer, and he didn’t leave a message.

AC: Favorite Austin act(s) over the decades, and why?

JC: My first true favorite was Poi Dog Pondering. I even hung out with them the day they signed to Columbia Records. Otherwise, Kelly Willis, Joe Ely, Don Walser, Slaid Cleaves, Eliza Gilkyson, Alejandro Escovedo, Uncle Lucius, Golden Dawn Orchestra, Black Joe Lewis, Bright Light Social Hour, Sara Hickman, Michael Fracasso, Grupo Fantasma, Suzanna Choffel. In their own way, they were all really good at what they did. I’m sure I’m forgetting someone.

AC: Austin’s growing fast, which is part of the reason for your departure. What’s your prognosis for the local scene moving forward?

JC: Depends on whether or not people can afford to live here and continue to make music. The scene has regenerated itself several times since I’ve been here. Affordability is the only reason that won’t continue.

AC: What’s your retirement from music writing look like? What will you be pursuing in Southern California?

JC: Reading and resting, and walking the dog. For starters.

A Sampling of Jim Caligiuri from the Chronicle archives: 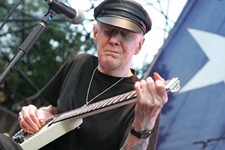