When a surprise Foo Fighters show cleared out of Stubb’s at SXSW 2011, the cleanup crew and a few stragglers remained behind, zero attention paid to fact that another act was setting up on the big outdoor stage. Fitz & the Tantrums slayed too few. Wednesday night at Rodeo Austin – far, far away from Downtown Sodom – they went off like Superbowl Halftime. 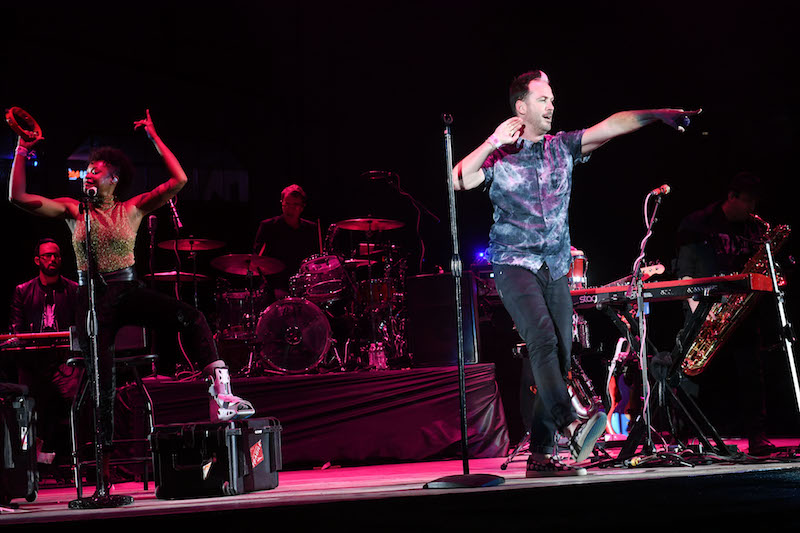 A prayer preceded day five of the two-week Rodeo in a bustling arena where half the occupancy scampered no taller than four feet. Surfing streaming crowds of humanity is never more humane than when the parent to kid ratio favors the latter, and every adult looks out for children – and not just their own. Whether Fitz & the Tantrums knew it or not, their demographic last night comprised mostly the age- and height-challenged, who danced in the bleachers like Saturday Night Fever came out last week.

Concert bookends “Get Right Back” and “Do What You Want” framed signature hits “Moneygrabber” and “Out of My League.” Fitz & the Trantrums leadoff “HandClap” sums up the soul-pop combine as succinctly as its initial hits, and LP mate “Roll Up” with its rolling “oh oh oh” deposits their soundtrack right back where it began: Motown. A synth hook here, bassline there, some baritone sax honk, and Noelle Scaggs’ indomitable spirit, indefatigable showmanship – even hobbled by a broken foot in a cast! – and women of Hitsville USA vox.

Bandleader Michael Fitzpatrick, “stripe,” fronted it all with a booming cover of “Sweet Dreams (Are Made of This).”

Austin Kiddie Limits at ACL Fest wrangles a gift-like three-ring circus, but SXSW is no place for tots. Just as any local teen under drinking age binges on local fests because they can’t get into club shows, Rodeo Austin educates its own demographic with the likes of Smokey Robinson, Joan Jett, and Kenny Rogers this Sunday. Next on our family tutorial: Patti Labelle, Wednesday, March 22.