After the peak moment of Ray Benson’s 66th birthday party at GSD&M on Tuesday night, in which outlaw Buddha Willie Nelson and Asleep at the Wheel’s frontman shared verses on “Pancho and Lefty” with the Avett Brothers accompanying, Nelson reflected the emotion of everyone in attendance when he locked eyes with the birthday boy and grinned ear-to-ear. 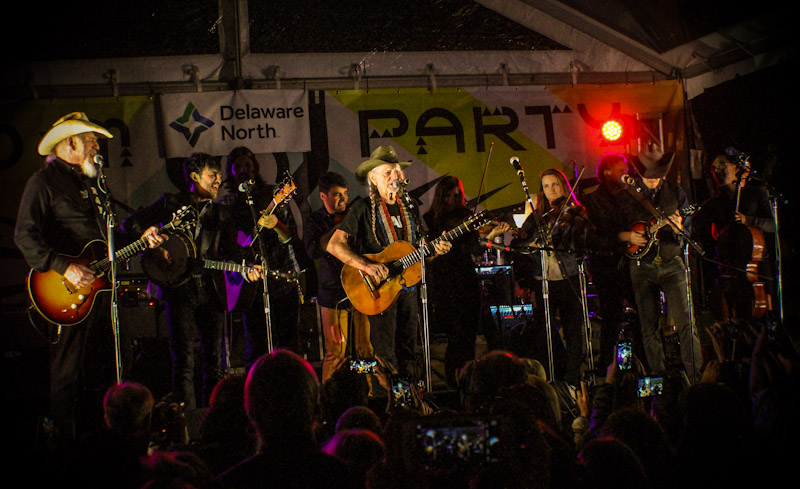 By that point, Benson – never shy of the spotlight – had been onstage for over two-and-a-half hours. He’d been presented with a garish cake, depicting a lasso-wielding armadillo standing atop a cow pie, and a new custom Collings guitar. His Wheel, meanwhile, rotated through a cadre of guest stars: Brennen Leigh, Charlie Sexton, Carolyn Wonderland, Wade Bowen, and Sunny Sweeney.

Better still, cardboard coffers had collected tens of thousands of dollars for the evening’s true benefactor, Health Alliance for Austin Musicians, the local nonprofit that sits Benson on its board.

Unlike George Strait’s surprise showing at Benson’s b-day bash last year, everyone knew an appearance by Nelson was imminent. The secret leaked weeks ago, but few expected the Avetts, in town for SXSW Film documentary and concert tonight at the Moody, and featured on Still the King, Asleep at the Wheel’s 2015 tribute to Bob Wills. North Carolina’s most famous folk export jumped onstage at 9pm, pitching a jig with Benson and his Wheel comrades on standard fiddle tune “Flop Eared Mule.”

Hundreds, if not more, packing the backyard of the West Sixth Street ad agency crunched toward the stage as the 10-piece musical conglomerate kicked through a Wills-heavy set list that included “Girl I Left Behind,” “Take Me Back to Tulsa,” “Stay All Night,” and Merle Haggard highlight “Mama Tried.”

When Nelson strode onstage without introduction to huge applause, the Avetts didn’t leave. Instead, they stepped back and strapped in, their eyeballs darting around for the first 10 seconds of each song as they scrambled to figure out the key.

“Hey Willie,” chirped Benson casually as he often does when the Red Headed Stranger, 83, pops into his shows.

Sparking up obligatory opener “Whiskey River,” Nelson stoked a moody fire with “Still Is Still Moving to Me,” then burned through his “Crazy/Nightlife” medley onset by a great version of “Time Just Slips Away,” spurred on by his mad, Django Reinhardt-like picking on his beat-up acoustic guitar, Trigger. Wheel pianist Connor Forsyth tickled the ivories supreme on a moving version of “Always on My Mind.”

One final toast, a massive version of “On the Road Again,” brought the Avetts back to the front since they knew every word. Who doesn’t? One particular line resounded apropos for Benson, who’d now spent three hours of his birthday jamming with his buddies:

“The life I love is making music with my friends.”