On an evening filled with historical performances, the emotional core of the 35th annual Austin Music Awards show occurred early. As the “Femmes for SIMS” peaked in the first music set, country sirens the Trishas took the stage with Savannah Welch carefully steadying herself on a new prosthetic leg as Liz Foster led a soulful reprise of “Rise Above.” 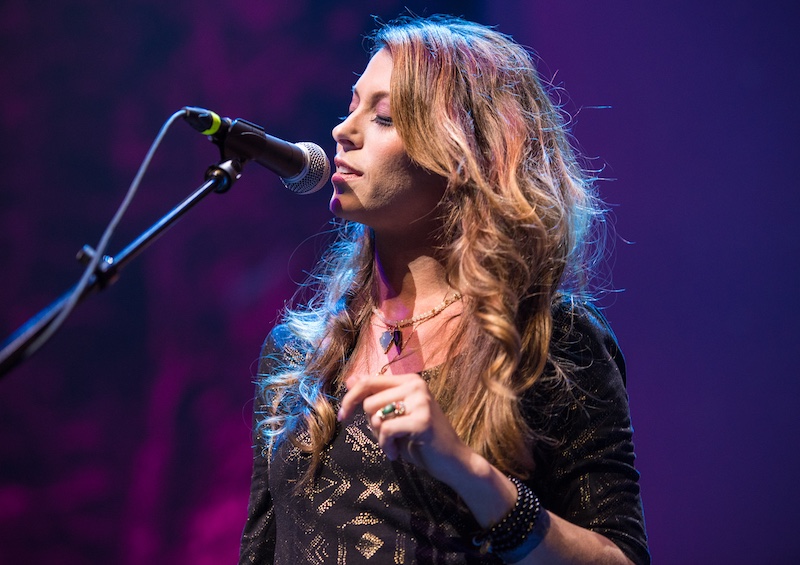 “I’m going to stand on my feet, rise above this pain.”

The harmony-braced quartet of Austin women gave poignant new meaning to the song in light of what had happened to one of their own, Welch’s body broken but unbowed, and their chorus forever stunning. As the song segued into a stage-packed finale of “With a Little Help From My Friends,” Welch held back tears through her lead on the opening verse.

If this year’s Austin Music Awards show coalesced into a single theme, it was the undeniable force of song. Nearly four hours of Sunday evening at the Moody Theater turned into a celebration of the power of music to heal, unite, inspire, and connect. 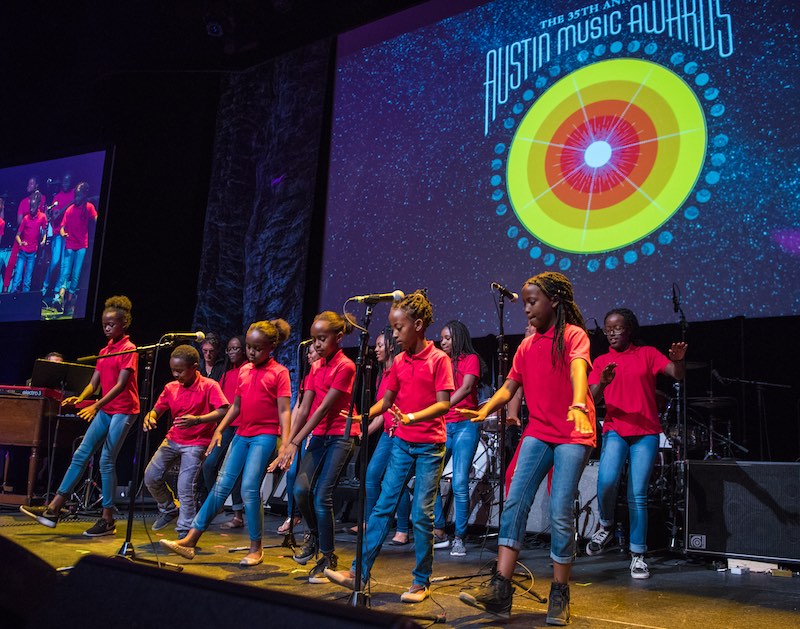 Opening benediction from New Generation Children’s Choir set that meaningful tone as the local refugee ensemble offered witness to their harrowing histories and newfound hope in a joyful rendition of African rhythm via “This Little Light of Mine.” That spirit echoed immediately in White Ghost Shivers’ frontwoman Cella Blue accepting the first award of the night. Paying the music forward is imperative.

“We are so lucky to work in a field with people when they’re at their best,” she declared.

Backed by native guitar slinger Charlie Sexton and his and Mayor Steve Adler’s incomparable AMA house band, the latter oracle moaned like the ages when her moment came. On harmonies stood Thievery Corporation muse LouLou, who then dished a dreamy and seductive French ballad. Kelly Willis’ soulful twang on “What I Deserve” called the Trishas to the stage for the set’s monumental close, which recalled not only Joe Cocker’s incendiary Mad Dogs & Englishmen revue but also Crosby, Stills, Nash & Young at Woodstock. 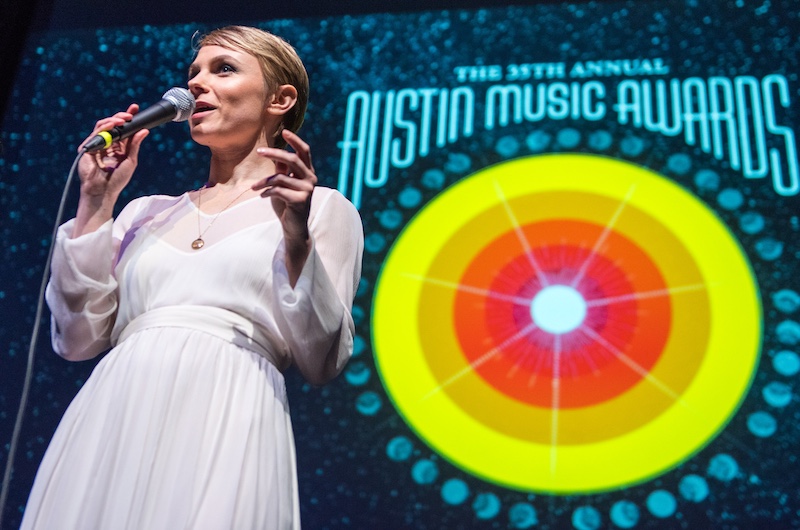 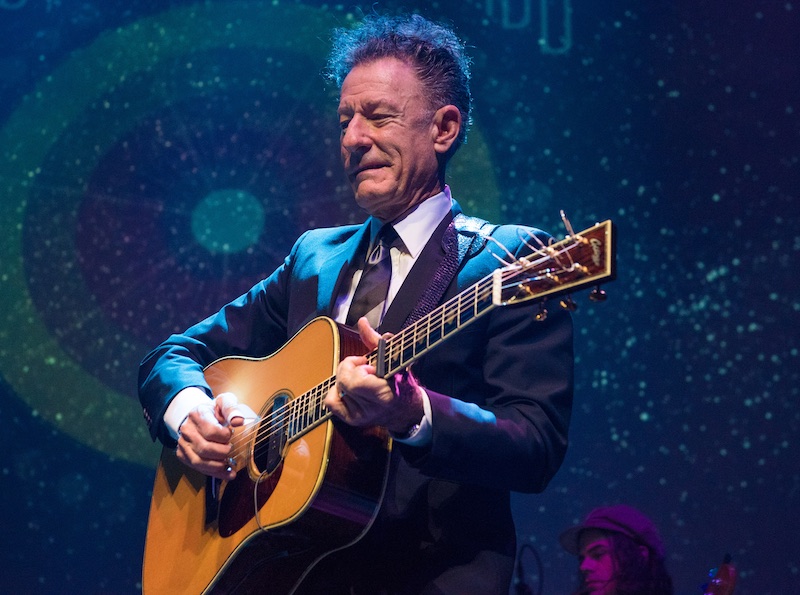 Jazz-pop vocal virtuoso Kat Edmonson honored music scene MVP Rose Reyes with the Margaret Moser Award, before the musical direction shifted to a set celebrating Texas songwriting legends. Blaze Foley’s “Clay Pigeons” received tender tread from the late song mystic’s friend, peer, and archivalist Gurf Morlix and the actor playing the former in an upcoming film by Ethan Hawke, Ben Dickey. Joe Ely then squared off on guitar with Sexton for Townes Van Zandt’s “Waiting Around to Die.” The night’s second hold-your-breath moment happened next: Edmonson re-emerging with Lyle Lovett for a stilling duet of “If I Needed You.” 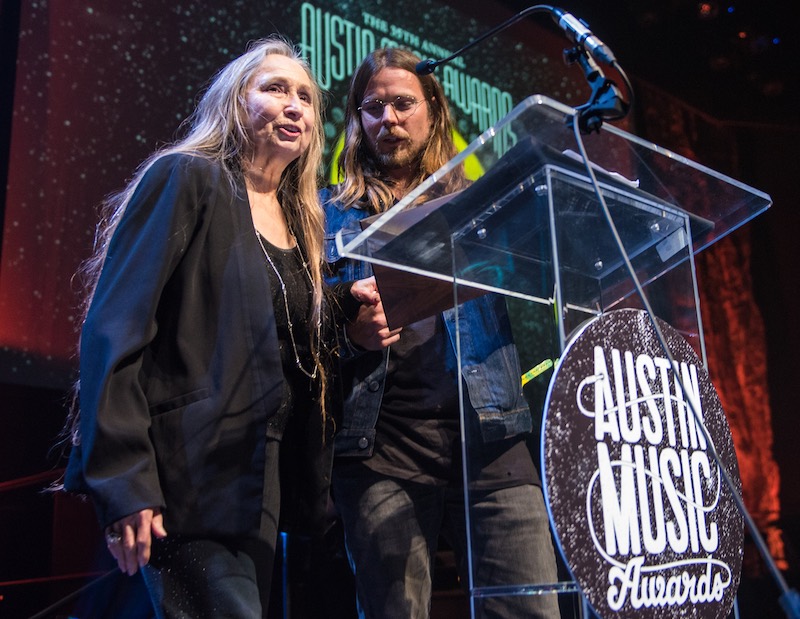 Capstone went to Lukas Nelson belting a bluesy “Amazing Grace” like the Second Coming to induct his aunt and Willie Nelson Family Band pianist “Sister” Bobbie Nelson into the Hall of Fame.

Between sets, acceptance speeches spilled heart-swelling gratitude for the city and its rabid adoration of musicians and their trade. Punk pioneers the Big Boys earned HOF honors as well, with presenter Graham Williams noting their trailblazing rise in an era when Do-It-Yourself wasn’t just another music business acronym. Stately Georgia Bramhall accepted a HOF plaque on behalf of her brother Doyle Bramhall II.

Bob Schneider keyboardist Ollie Steck proved the evening’s most animated winner (“What the fuck were you people thinking?”), but Golden Dawn Arkestra materialized in full cosmic regalia in claiming their Experimental/Avant-Garde plaque, espousing the power of music to change the world. 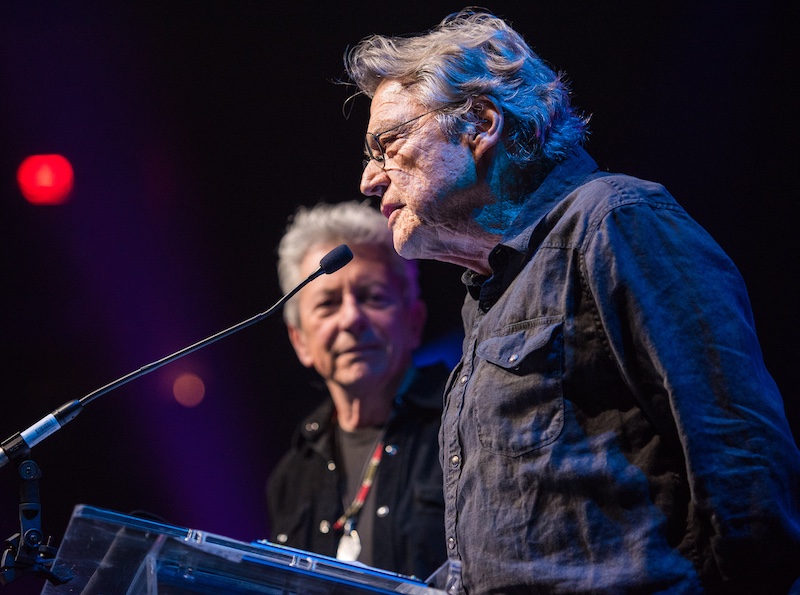 Terry Allen took a more grounded view of song. Accepting the inaugural Townes Van Zandt Award from longtime compatriot Joe Ely, the Panhandle’s multidisciplinary arts icon intoned an a cappella version of “Bloodlines” in his speech and declared, “In these wicked times, the music is still around to give courage and keep us alive.” He then led a band including sons Bukka and Bale through unofficial Lone Star pledge of allegiance “Amarillo Highway” alongside Lovett, “New Delhi Freight Train” with Ely blowing smoke on harmonica, and “Gimme a Ride to Heaven, Boy,” with the Trishas rounding out vocals. 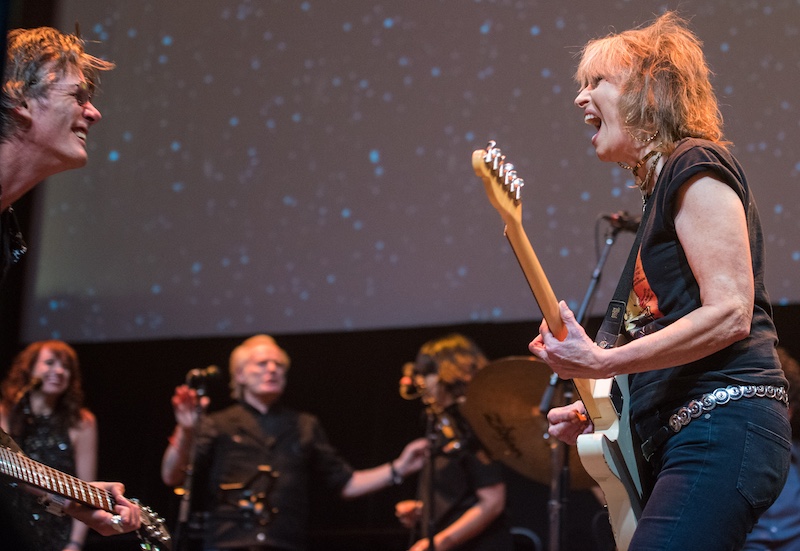 Sexton, who on previous Awards nights materialized Bruce Springsteen first lieutenant Steve Van Zandt and Robert Plant, last night produced a lightning bolt in Chrissie Hynde, fresh from the Pretenders opening for Stevie Nicks across town at the Frank Erwin Center. “Message of Love” swarmed the floor with fans and photographers, and the rock icon smoked guitar and harmonica alongside Sexton on a raw rendition of “Middle of the Road.” 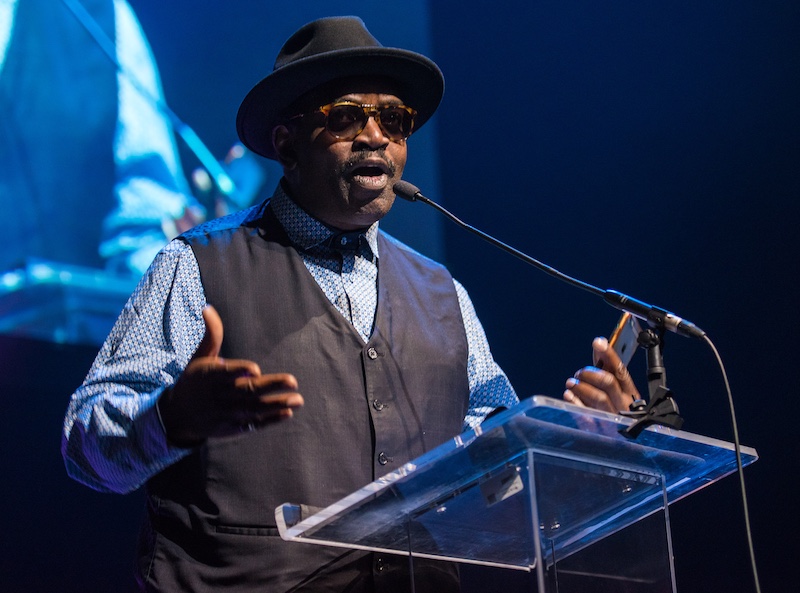 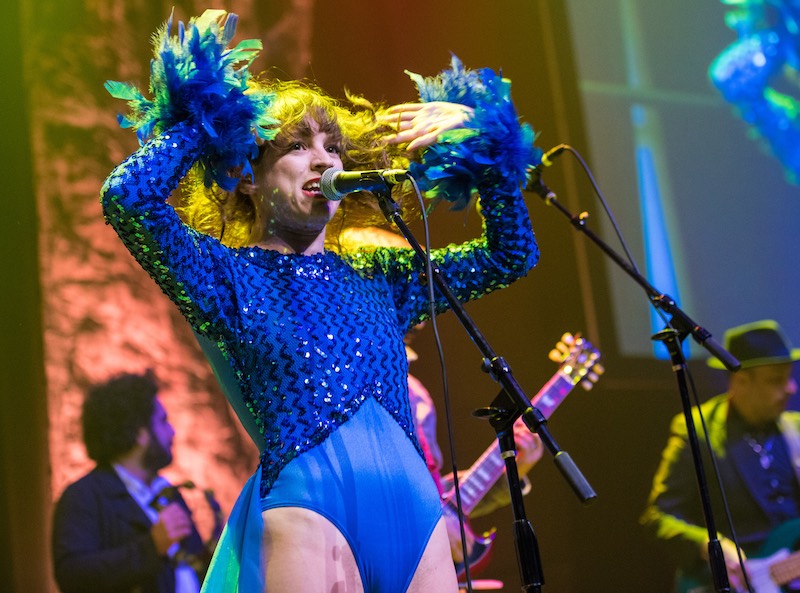 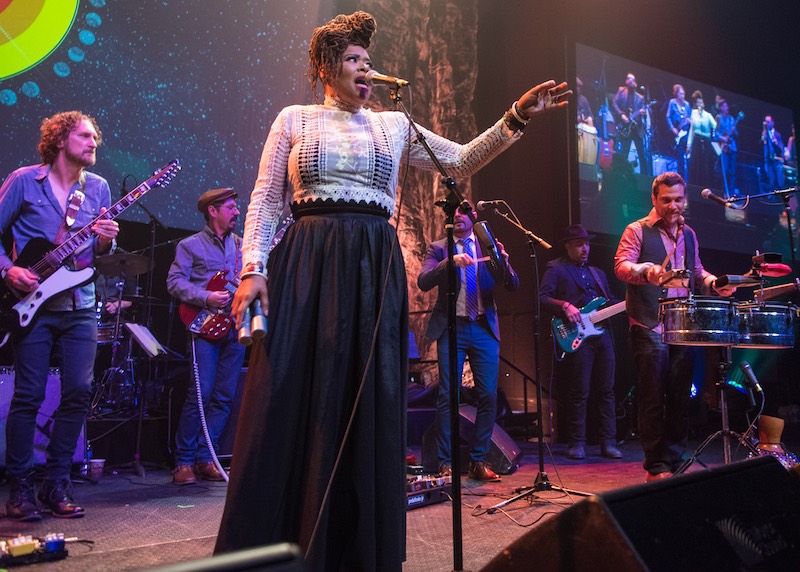 Hard act to follow, but the Latin funk fusion of Brownout and Grupo Fantasma together closed out the night with a punch to the sternum. Introduced by hip-hop pioneer Fab 5 Freddy, the combined forces brought on A Giant Dog and Sweet Spirit frontwoman Sabrina Ellis for a glam-punk explosion. When the grouping lit into the Rolling Stones’ “Can’t You Hear Me Knocking,” Ellis in a royal blue unitard, all that went missing from the raucous spectacle was Mick & Keith’s inflatable phallus from their 1975 tour. Jai Malano could’ve opened a concert such as that with her majestic presence and voice. She and guitarist Johnny Moeller led the Browntastic orchestra in a riveting take on Dan Penn’s “Ain’t No Love” that scorched into “Freedom Blues.”

The night ended abruptly near midnight, that final entourage loading offstage while the audience waited for the next surprise. In fact, KUTX soul man Rick McNulty, again the AMA emcee alongside Best Radio Personality and colleague Laurie Gallardo, reappeared to tell everyone it was over. By that juncture, the Austin Music Awards' 35th year had set a new standard for local music scene jubilation.