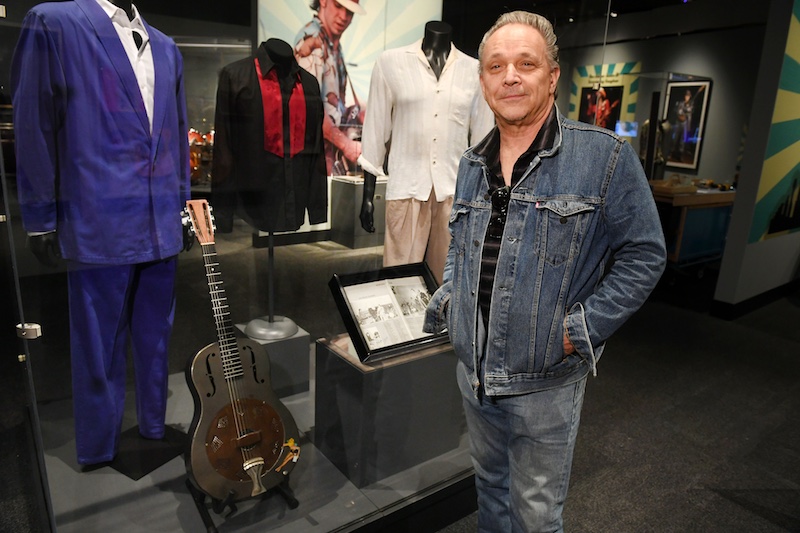 Centerpiece of the exhibit’s six-string selection is, of course, Stevie’s instantly recognizable Fender Stratocaster known as “Number One.” Recall that he copped that beat up, immensely rebuilt axe – believed to be ’63 body and ’62 neck – in 1974 from Austin retailer/repair man Ray Henning, who claims it was previously traded in by Christopher Cross.

The National resonator guitar Stevie was famously pictured with on the cover of the Chronicle is there. According to Jimmie, Stevie believed it was previously owned by Leadbelly. There’s also Clarence “Gatemouth” Brown’s Fender Esquire, Lonnie Mack’s Flying V, featuring a Bigsby tailpiece attached to an extra metal bracket, the ’51 Fender “Nocaster” that Jimmie and Stevie learned to play on, and SRV’s complete live rig: Tube Screamer and Fuzz Face stompboxes plugged into a combination of Dumble, Marshall, and Fender amps.

As we surveyed the clothes, keepsakes, photos, instruments, backstage passes, and accolades that the public can gander Monday-Friday, 9am-5pm, and Sunday noon-5pm, I asked Jimmie Vaughan what the totality of the room represented.

“I really believe that this is an American story about if you really love what you do and you give it everything, you can be successful. Or at least you’re gonna be happy,” he offers. “I think that’s what Stevie did. You’ve got to understand that, even for me, it seemed like an absolute impossibility to be a musician and to make records, and sing and play and go all around the world when we first started. This is proof that dreams come true.”

Jimmie inherited most of his only brother’s artifacts in the exhibit, which has previously showed in four states and will remain at the Bullock until July 23. Sharing it all remains paramount to him.

“Just to sit in my house and look at this stuff would be sad,” he said. “I’d rather have Stevie. That’s what people don’t get. He’s my little brother.

“It was my job when we were little to take him to the bus stop and get him to school and back because I was his big brother. I don’t know what else to do. I can’t make it go away that he got killed, but people love his music and they love his story, and they love looking at his stuff.

“I think it would make him happy and it feels useful. I’m thinking about starting my own museum for Stevie’s stuff, which could also include other people, but that’s just a dream. I’ve had other dreams come true, though.”