UPDATED 6:20pm: After Felix Walworth posted a video to Twitter showing that they had not misleadingly cut-and-pasted their contract – as alleged by SXSW Managing Director Roland Swenson – Swenson emailed the Chronicle to clarify he mistakenly thought an artist agreement had been altered, when in fact Walworth was referencing the “invite letter.”

“It was still a misunderstanding on his part in thinking that the deportation threat was from us, not just the consequences of violating the terms of the visa,” wrote Swenson. "It was also out of context.”

Asked whether SXSW will consider revising their contract for future years, he replied, “Yes. The contract could use some work. But no matter what a contract says, it’s easy to jump to conclusions when you pull a couple of paragraphs out of context.”

This afternoon, Brooklyn musician Felix Walworth publicly canceled an upcoming South by Southwest performance by their indie-pop band Told Slant with a tweet accusing the organization of using a performance contract that threatens to notify immigration officials if artists perform outside of their official showcases.

“I’m not interested in aligning myself with an institution that interacts with immigration authorities as a means of controlling where art is shared and performed, and who makes money off of it,” they wrote.

After looking through this contract sent to me by sxsw I have decided to cancel Told Slant's performance at the festival pic.twitter.com/rI2Xv0duJl

SXSW Managing Director Roland Swenson says that the images of the contract that Walworth posted are two different parts of the agreement cut and pasted together in a way that is misleading and out of context.

“We’ve had these restrictions in the agreement for about five years and never had to enforce them,” Swenson said by phone today. “It’s intended for someone who does something really egregious like disobeying our rules for pyrotechnics, starts a brawl in a club, or kills somebody. You have to really fuck up for us to do this stuff.

“What people don’t understand is that we’re already talking to immigration about all these bands,” he continues – referring to the hundreds of international artists that SXSW books annually. “Most of these bands are here because we sort of sponsored them. So if somebody did something bad enough that we had to enforce this part of the contract, we would probably be obliged to notify immigration that ‘Hey these guys are trouble,’ but we’ve never had to do that.” Prior to Walworth’s viral tweet, followed by other tweets denouncing SXSW for using an “imperialist model” and suggesting that all like-minded artists should bail at once, at least one manager of an international band showed evidence of fearing that artists would lose their visas if they played an unofficial show in Austin during SXSW.

“Sorry the band are restricted to official SXSW showcases as they have a ‘visa waiver’ as a USA work permit costs more than flights, meaning they can be deported/5-year ban if they play any unofficial shows & they have more big showcases TBA,” wrote the agent of a Japanese punk band to Austin booker Ashley Bradley weeks ago, citing it as the reason they couldn’t play an unofficial event.

“Some of this about playing shows other than their showcase, which, if they come in on the kind of visa that most of them get – they’re not supposed to do that,” confirms Swenson, pointing out that SXSW never threatens international artists with immigration over playing extracurricular shows. “All this stuff in there about getting deported and immigration – that’s just us telling them this could happen if you’re doing this other stuff. It’s not us saying we’re going to try and have you deported, it’s us warning them that if they violated the terms of the visa that got them here, that’s what could happen.”

Swenson dismisses the Told Slant controversy as a way for an artist to get publicity.

“I think that everybody has figured out that a quick way to get your name out there is to accuse us of conspiring with immigration authorities, but we’ve been on the right side of immigration issues,” Swenson said. “We’re doing a show with bands from the seven banned countries and we came out publicly against the immigration ban last month. I don’t know why this guy did this. He’s just confusing this very complicated subject.”

This post has been updated since publication to reflect Felix Walworth's gender nonconformity. 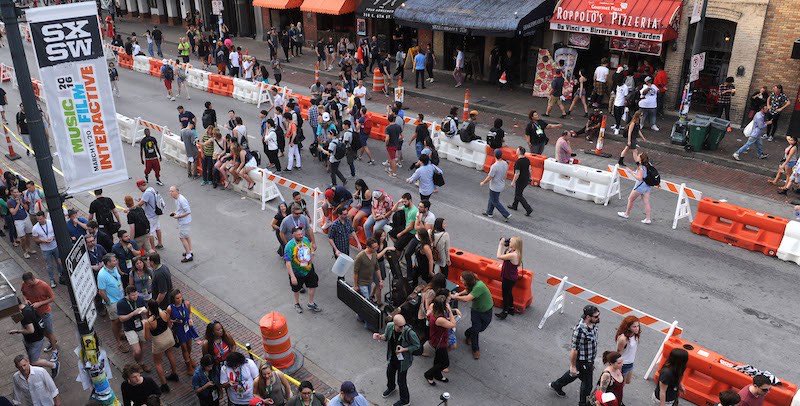