The city’s investigation into the Austin Music & Entertainment Division reveals that former Program Coordinator Ashley Buchanan, wanting to be reimbursed for a trip she took with a vendor that was supposed to come at no cost to the city, allegedly filed a fraudulent invoice to pay her boyfriend $2,500 for sound engineering services that never took place. 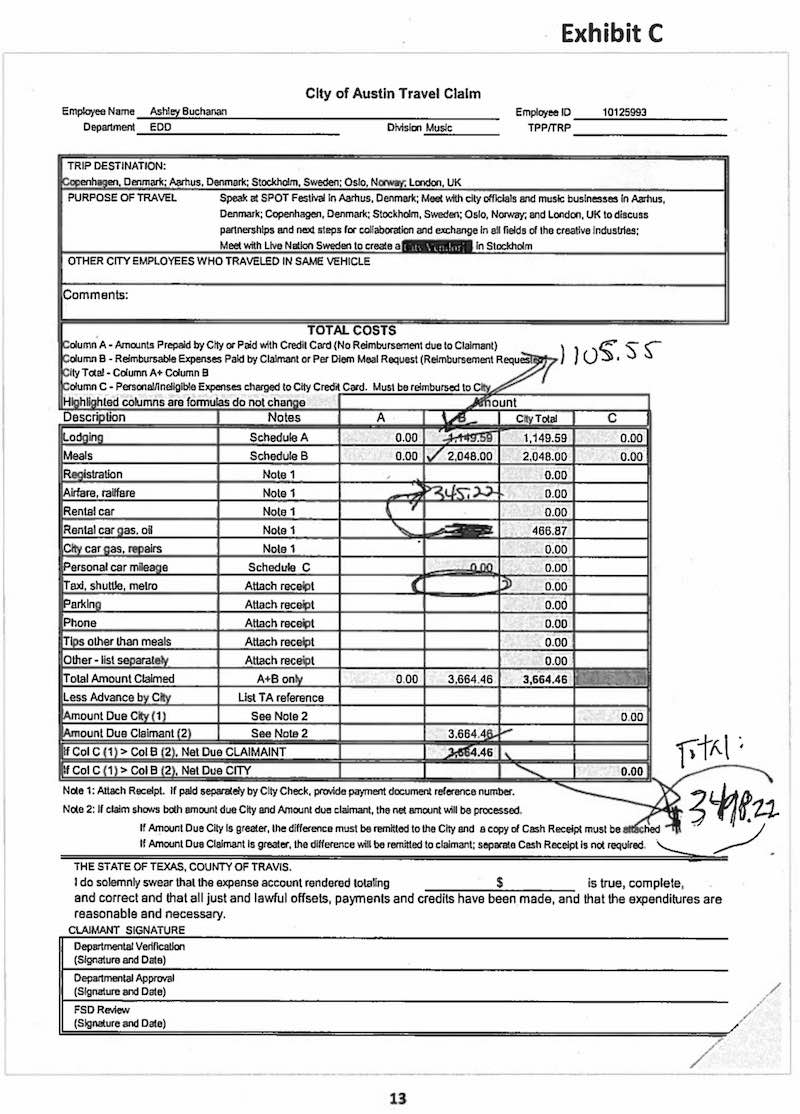 A page from the city officials complaint to the Ethics Review Commission. Read the full report.

The inquiry, executed by city auditors, found evidence that Music Division head Don Pitts became aware that his subordinate attempted to defraud the office and did not report it to his supervisors. A city employee failing to report wrongdoing is in violation of an administrative bulletin. That much is cut-and-dried.

From that point, the 18-page report – comprised of testimony from Buchanan, who no longer works at the office, and Pitts’ rebuttal – present very different accounts of what happened. According to Pitts, Buchanan was repeatedly informed that the trip, which took place in April 2014, was approved “at no cost to the city.” For months afterward, however, she repeatedly demanded to be reimbursed for her expenses.

The following month, Buchanan filed an invoice for $2,500 in connection to a live sound engineering event by her boyfriend that never took place. Pitts said he had no part in the scheme. The next month, he directed a review in which the fraudulent invoice was discovered.

Pitts says he verbally reprimanded Buchanan and changed the office processes to require his approval of invoices in the future so similar issues could not happen again, and recovered the money – returning it to the city within three business days. He admits it was an oversight to not notify his superiors of the issue.

“My thought was to just make right whatever wrong had been done and get back to work,” reasons Pitts in the report. “When she so quickly reimbursed the City upon my immediate direction, I took her to be sincere and apologetic. I also didn’t want to believe that the act was indeed malicious. There had been other innocent mistakes on invoices and payments.”

She claims Pitts advised her to agree that the vendor trip would come at no cost to the city in order to ensure that the travel request was processed quickly, but told her she’d be reimbursed later. She says that after the trip she began preparing formal reimbursement paperwork, which the report says was confirmed by other employees in the department. The coordinator says she conceived the idea to get reimbursed by paying her boyfriend with a fictitious work invoice and that Pitts supported the idea – though his signature was not found on the document. The day she filed that purchase authorization, Pitts emailed her and told her that executive management in the Economic Development Department didn’t want her boyfriend hired as a sound engineer, but she filed the request anyway and it was approved.

One significant point of contention outlined in the report is whether Pitts was aware of Buchanan’s invoice scheme. Specifically it references an email from January 2015 where the coordinator provided details on another way she could be reimbursed: submitting a fictitious invoice for advertising expenditures of $3,000. Buchanan wrote to Pitts in the email: “This one would sneak through without getting noticed because it is ‘advertising’ and doesn’t need a [purchase order number]” and “if you have another idea, please let me know.”

In response, Pitts emailed back, “Let’s discuss. I will work with you on this but this can never happen again.” He also claims never to have fully read the email. In his rebuttal – the auditor’s report allows for rebuttals after the fact that are then included in the overall findings – he wrote:

“I read a few lines of the email on my phone, and I’d seen enough. Here it was again. I honestly did not read the entire email, I just responded by telling her, ‘Let’s discuss. I will work with you on this but this can never happen again. Rodney was clear that it was no cost to the city.’

“The last sentence of my response, in which I reiterated the Deputy Director’s direction that the trip be at no cost to the city, is omitted from the audit report’s discussion of this issue. This last sentence is significant in that it demonstrates that I again reiterated that she was not to be reimbursed for the trip. While the wording of my response is regrettable in retrospect, my intent at the time was to respond to her email, hear her out again, and tell her no, again.

“Which is what I did.

“And, the part of the email that says ‘let’s discuss’ and I would ‘work with her’ were not intended to convey agreement, but rather that I would be willing to once again hear out her request and then this needed to be over, and if she wanted more money, then I would work with her on that, if and when her job performance improved. Please understand that her conversations with me inevitably became about getting more money, whether through reimbursement for the trip or through her earning a higher salary.”

This yearlong investigation into a situation that ultimately incurred no financial loss to the city was rendered mostly moot by recent developments. Tuesday, before the investigation was completed, Pitts resigned from the Music Division, citing frustration with city bureaucracy. He had been put on administrative leave January 12. Last night, Thursday, Pitts agreed to return to the office as an internal consultant through April 29 to help them get through the busy spring festival season.

“Don is a passionate advocate of Austin’s vibrant entertainment industry,” wrote Interim City Manager Elaine Hart. “We value his professionalism in developing positive relationships with musicians, venue owners, and the broader community. We look forward to calling upon Don’s expertise during this time of transition in the Music Office.”