Frontwoman for the Kills, Alison Mosshart is an avid Neil Young fan. Saturday at the Paramount Theatre’s Neil Fest, she and a host of others including Norah Jones and Shakey Graves perform songs by the two-time Rock & Roll Hall of Fame inductee. Before then, she discussed Young, cars, and the festival benefiting the Refuge Foundation of the Arts. 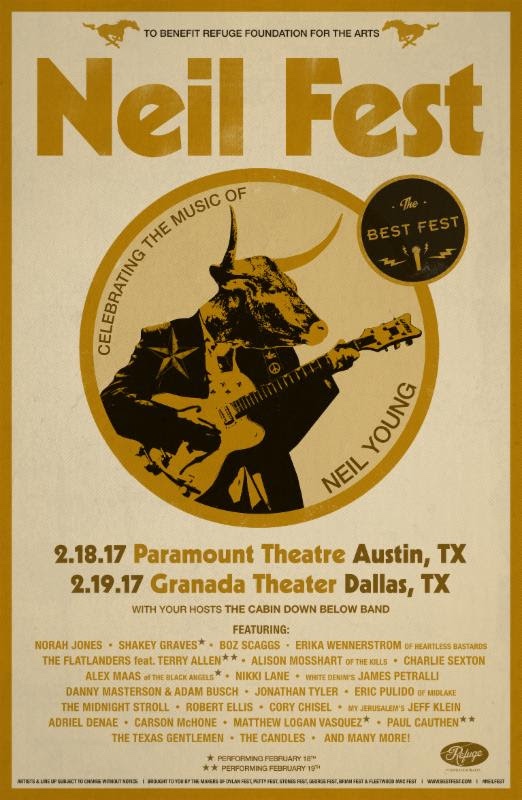 Austin Chronicle: What made you want to jump on board for the Neil Young Fest?

Alison Mosshart: I feel like he’s always been there for me and I’ve always listened to him. He has so many songs that are so beautiful and so moving. I’ve seen him play quite a few times and every time it’s been incredible, like move-me-to-tears type of incredible. He’s just a powerful performer, artist, and writer. He’s a huge inspiration to me and not in the way that I want to sound like him, but in a way that I’ve been listening to him my whole life and there’s no way it’s not in me.

Like a record that I really love is Le Noise. I love the melodies on the album and it was so different for him at the time. I remember when that album came out, I don’t think I played anything else in my car for the following year besides that album. It was weird because many people think of his acoustic songs like “Old Man,” which are great, but this album was very experimental for him. It was his electric guitar and voice coupled with a bunch of effects. It was raging and even ambient at times. But I think in those times of doing something unexpected, that’s where the magic happens.

AC: What is it about him that has resonated with you?

AM: I think his delivery and the sound of his voice is very special. It sounds so vulnerable and genuine. The way he conveys ideas is really moving and very real. It’s really hard for me to explain it, but I guess in the perspective of a songwriter and a listener, I trust it. It carries me away and it doesn’t sound contrived.

It’s like when you hear Harvest or “Old Man.” There’s just this feeling of sincerity and authenticity in his lyrics and guitar playing that sounds so simple and effortless. He’s a trifecta: he’s an incredible songwriter, he has an incredible voice, and is an amazing guitar player. I like everything about him, and I love his books so much as well. He wrote that memoir about his life and cars, which is one of my favorite books because I love cars as well.

AC: That’s interesting because you also paint. Your art show Fire Power, one of the central themes was cars. Why cars and how is painting different from making music for you?

AM: Yeah, I did a lot of tire track paintings with some remote control cars. I remember being at Toys R’ Us going through so many little cars trying to find just the right tire tracks. I just love the way skid marks look and the marks that it leaves on a dirt road. I think they look beautiful and give me the impression of like fossils because after I see them, I’m always questioning, “Where did that car leave to,” or “What kind of car was it?”

There is something about highways, cars, and the open road that I’ve come to appreciate so much. Perhaps it’s because I’m always touring, but even then, I still think there’s nothing better than blazing down a highway.

And painting is such a strange feeling. Even though I always do art, I never really contemplated doing an art show. It’s a very therapeutic release for me and is similar to music in that regard. It’s also like an out-of-body experience. When I saw the paintings hung in the gallery, it was equivalent to being onstage. I do the two things hand in hand and always have.

AC: On your Instagram there’s a painting you did I’d term political. Neil Young’s work can be very political as well. How do you feel about the intersection of politics and art?

AM: I think that some people are really talented at making political music and others fuck it up. I think it’ll be hard to escape the next few years given the political climate we’re living in. I feel it’s often just an instinctual reaction because it’s the reality that someone is experiencing, and music at least in a lyrical sense is the story of an experience.

Like for example, I’ve never considered my music or art to be overtly political, but there will always be an undercurrent of it because you can’t escape it. That painting is from recent events and how I was feeling in particular. What I was feeling at that time was chaotic and extremely out of control. I’m not talking about a person or addressing anybody. It’s just an emotion and a feeling. You can call it political or anything else you want.

AC: The proceeds from Neil Fest benefit the Refuge Foundation for the Arts. How do you feel about giving to a cause that could help artists in a time that seems very harsh to their livelihood.

AM: It’s a refuge for artists and a place for artists to go work. The way in which I resist this environment is by giving back to something that has helped me and I’m sure could help others. I say this because the Refuge Foundation for the Arts is a lot like this place that I worked for a while called Hedgebrook off of the coast of Seattle.

It was a writer’s retreat for women and it was so incredible. I stayed there for 10 days in this tiny little log cabin in the woods. I didn’t see a soul all day except until 5pm for one hour at dinner. There were about six girls there and I’d only see them for a limited time during the day. The rest of the time I spent was in isolation with no Internet or cell phones. I was reading, writing, just playing music or painting. Throughout that time I managed to make 16 songs, 75 paintings, and wrote 200-300 pages because there were no distractions. It was so inspiring and so good for my head.

This charity is a lot like that in that it benefits artists who don’t have the means or space to actually create without being stopped by the everyday things of life. I think these types of things are really beneficial and therapeutic for artists especially in times like this where everything seems so uncertain and bleak. I know that while I was on the retreat, it made me undergo so many epiphanies and was such a great moment for self-discovery and positivity. It’s an extremely powerful and almost life-changing experience.