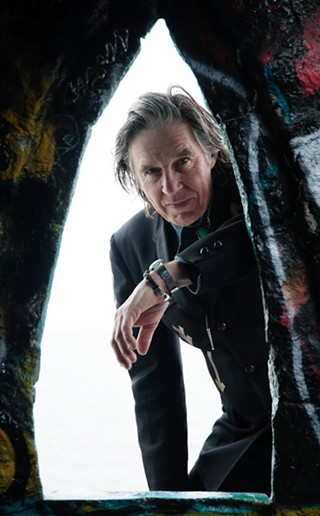 “Oh, come on! It ain’t that cold is it?” John Doe pokes fun at me for cranking up a space heater in my garage office at the onset of our phone interview.

“You know here in Texas we’re huge pussies if it drops below 80 degrees,” I reply.

“Oh not like us tough guys out in California,” he chuckles.

This meteorological repartee, albeit totally inane, served as a suitable lead-in to the question I was dying to ask the roots renegade leader of L.A. punk heroes X.

Austin Chronicle: Speaking of the weather, I heard you’re moving to Austin. True?

John Doe: I’m a man of the world, Kevin. I’m going to be living in Austin. I’m not just yet, but I will be.

AC: Tell us about the Austin connection. What brings you to our fair city?

JD: [Adopting a miner’s yowl] There’s gold in them thar hills! No, I’m moving to Austin for an adventure, and there are some other people involved. I got a lot of good friends there and I’ve always liked Austin. I’ve liked Austin ever since Randy Turner [Big Boys singer also known as “Biscuit”] said, “Hey man, come on down!” We loved the Big Boys and Austin’s cool. I’ve loved Austin for a long time and I can also buy a house there rather than rent perpetually in California, even though I love California.

AC: Did X play with the Big Boys early on?

JD: Oh yes, they opened for us every time we played in Austin from whenever they started ’til whenever they were out of town and touring when we came through. Probably from ’78 or ’79 ’til ’83. Yeah, we played with them a bunch of times in Austin and Houston – Club Foot all that shit. I loved Biscuit, he was always a shining light.

AC: Tell me what the early X shows in Austin where like.

JD: The early shows were raucous. Everybody was trying to prove how punk rock they were. One of the shows, within the first two or three songs, someone threw a pitcher of water or beer on [X guitarist] Billy Zoom. Billy doesn’t like that kind of stuff because it messes up his guitar, so he walked offstage. Chris Gates, the Big Boys’ bass player, got up, grabbed the mic, and said, “Okay, this is how it’s gonna go: The next person who throws something, I’m going to kill the whole area.”

He was a big motherfucker too. Everyone kind of looked around at their neighbor and said, “I don’t want to be killed because of you.”

AC: Jesse Dayton, who’s been subbing for Billy Zoom in recent years, lives in Austin too. He’s one of your friends in town?

JD: Yeah. Actually, Jesse and I have played together for about four years now. On three or four solo tours I’d done with the band, I’ve used Jesse’s band with Chris Rhoades and Eric Hughes, and they would open the show doing Jesse’s set, then the three of them would come and back me up. Then, when Billy had another cancer treatment on pretty short notice – he got diagnosed in June 2015 and we had shows booked in August or September – Jesse said he’d fill in for Billy on those two short tours.

Jesse’s great. I’m glad his record’s done well. He’s a terrific player. It’s too bad he doesn’t play with anybody good, only those second-stringers like myself, Waylon Jennings, and Glen Campbell. People like that [laughs].

AC: I know you two share an interest in film and acting.

JD: Yeah I did a piece in his movie Zombex, which is a great premise to a movie.

AC: Is acting something you’ll pursue in Austin? We have a celebrated scene with Richard Linklater, Jeff Nichols, and Robert Rodriguez. Is that something you’d like to get involved in while you’re stationed in Austin?

JD: Absolutely. Like I say, I’m a man of the world. Going on tour, giving enjoyment to people, it’s like making a tour of banks, making withdrawals. It’s great.

AC: Is that financially or spiritually?

AC: Your most recent release, The Westerner, was largely recorded in Arizona. Do you feel like the place where you create music directly influences the final result?

JD: I believe that everything you make should reflect its location. You should be able to tell something about where it was made. In particular, this last album I recorded with Howe Gelb in Arizona because I really like the sounds that Howe has gotten out of the WaveLab Studio in Tucson, and I wanted to be close to a friend of mine who was on the way out. More so, the songs seemed to fit Howe Gelb’s production style and the sounds that came out of WaveLab.

Howe Gelb is the driving force behind Giant Sand. Giant Sand has been around since the early days of punk rock in Arizona and lately he’s influenced the sound of Neko Case. If there was no Howe Gelb, there would be no Calexico, so all that spacey reverby stuff you’ll hear out of Arizona [circles back to him].

AC: Are you working on a follow-up yet?

JD: No! [Letting out a long laugh] Sometime. I’ve got ideas, but I’m still working on this Westerner album.

AC: A couple years ago [X vocalist and Doe’s ex-wife] Exene Cervenka proclaimed in an interview that she was moving to Austin. Did she end up here?

AC: What can people expect for the Valentine’s Day concert – aside from love songs. Are you playing solo or with a backing band?

JD: Just solo. It will be very intimate with a little bit of electric guitar here and there. There may be some cover songs, but mostly originals, and there will be some X songs thrown in for good measure. If I go see somebody, I like hearing things associated with them, not them being selfish and playing just what they want to play.

AC: X was onstage at South by Southwest when a drunk driver being chased by police drove through a crowd outside the venue the band was playing and killed several people. What do you remember from that night?

JD: We had no idea that it happened. We were playing rock & roll music and it was loud. We had no idea what was going on. We got offstage and someone said, “Don’t go outside.” Of course I peeked out there, but it was already cleaned up by the time we were done. It happened right in the middle of our show. Evidently there’s some video out there where you can hear us playing and the person turns their camera toward the street. I purposefully didn’t watch that. The emergency responders get a gold star for being able to get there and do what they do.

JD: [Laughs] That’s the first time my name has ever been mentioned with his. I’m just gonna get there and live like an Austin citizen. I’m going to go to all the protests and I’m going to play at the Hole in the Wall on the Saturday of South by Southwest. It’s my friend’s Secret Handshake party – any handshake gets you in. It’s on Saturday, March 18.