“It’s either being creative or I’m bored easily” 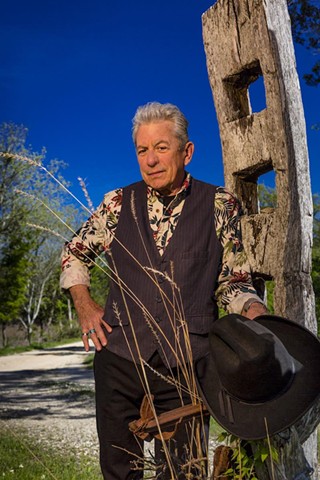 Joe Ely marks his 70th birthday Friday night at the Paramount Theatre. Often compared to both Bruce Springsteen and onetime tour mate Joe Strummer for his dynamic stage presence and songs that speak to the heart of his home state, the locally sourced Lubbock native will be joined onstage by a host of friends. They plan to cover all eras of his storied career.

Austin Chronicle: How does it feel to be turning 70?

Joe Ely: It doesn’t feel any different, but it sure sounds a lot different. Of course I felt that at 40 too.

AC: The music keeps you young though, doesn’t it?

JE: That’s exactly right. I continue to play and write a lot. I’m actually writing more now than 30 or so years ago. I was thinking the other day about turning 40. I was in Norway, coming out of the Arctic Circle, doing this whole tour of Scandinavia. I’d had it with driving around the fjords in this little bus that we had. So I decided to jump ship and catch a boat.

AC: You’re of the generation that embraced the slogan “Don’t trust anybody over 30.” Turning 40 must have been a big deal.

JE: Yeah, from growing up in West Texas in the hippie days that was quite a jump.

AC: What can you tell us about the Paramount show?

JE: It’s still being put together as we speak. I’m putting together a list of songs that we’d like to play and I’m inviting a lot of the musicians that I’ve played with over the years. I’m looking at my 70th birthday as having fun and not work. There’ll be guys like David Grissom, who I haven’t been playing with for the last few years, David Holt, and Lloyd Maines is going to play the whole set. It’s going to be quite an array.

I’ve invited other people to come if they can, but I don’t know who all is going to show up. I’m putting together a set list to be passed around between different eras of bands and leaving it open on both ends so that anything can happen.

AC: You were the Texas State Musician for 2016. How was that experience?

JE: I didn’t really know what to do. At the ceremony where they named me that, I asked one of the senators if they could remove all the speed bumps in Texas. That would be my one proclamation.

AC: You seem to be more creative via different avenues in recent years. You published a novel, Reverb, you released a couple of spoken word CDs, and I know you’re generally active in the visual arts. Did something happen that made those things possible?

JE: No, I think it’s just that I started opening up and letting it go. I’ve always – since I was 16 or 17 and first hit the road hitchhiking around the country – written things down in a journal. Like places I’ve been, and their stories along the way. I’d keep a journal of dreams. Every morning I’d wake up and write down what I dreamed.

Then I started drawing a lot because I had a lot of spare time. You know, getting left in a cafe, or getting caught in a rain storm, something like that. I never let that out until years later. It was just personal. Some people at the University of Texas asked to publish the road journals. At first I said no. I didn’t think I’d written for anybody but myself. Then I started thinking about it, going back through, and I thought, “This is just an extension of what I’ve done my whole life in a way.”

So I released those and when I finished, I’d been working on a book about the Sixties in West Texas, the Vietnam War, and the music and social customs that had changed radically. I got into trouble the very first day psilocybin and mescaline became illegal. All these things were stories I’ve never told on any of my records. There were a couple of songs that skidded on the surface, but the things that I hadn’t made songs about, they were a part of my life, so I started releasing those things. I’ve still got several of those that I haven’t released.

So that’s what I’ve been doing the past few years, organizing these collections. In a way, it’s an interesting way for me to keep my bearings – to think about the songs I was writing during that time. It’s a compass so to speak.

AC: That sounds similar to what Terry Allen talked about, where it doesn’t matter the form that something takes, it’s just different ways of be creative.

JE: It’s either being creative or I’m bored easily [laughs].