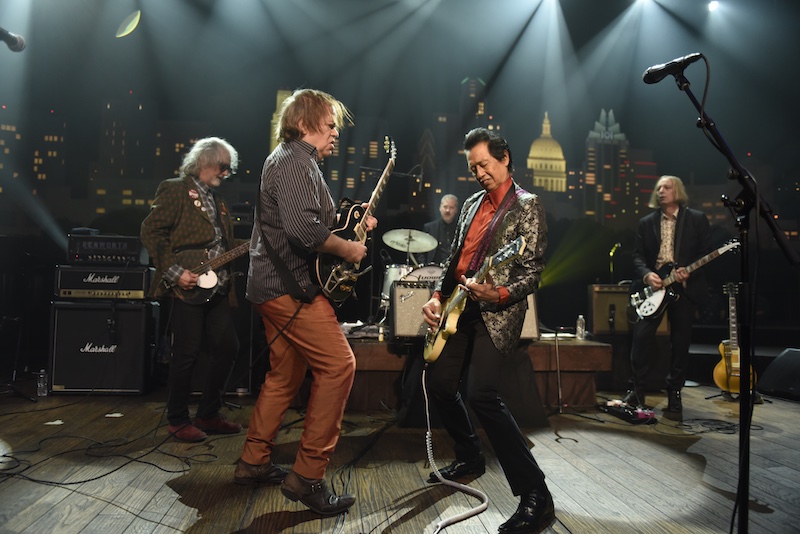 Son of Texas – San Antonio – spawn of Austin (1981-2015), the longtime local hero packed up for Dallas last year when a sentry at the city limits nodded off. Willie Nelson spends more time on Maui than in his home state probably, but Escovedo’s exit still stung – like one of our unicorns got out. Cough and you missed it, but six cuts into his 75-minute ACL Live at the Moody Theater whoop, the bandleader of six projected his greeting, and swallowed his own answer in a hiccup of emotion.

“How we doing tonight?” he greeted the full house, then got distracted by his guitar and almost inaudibly added, “So good to be home.”

Relief caught in his throat.

Having just finished off “Suit of Lights” from new album Burn Something Beautiful – 12 of its 14 songs recorded last night – the consolation was all ours. The song’s Sticky Fingers Stones vibe, Escovedo’s rich acoustic guitar rhythm egging on longtime Neko Case consort and siren in her own right Kelly Hogan, cut the haze of electric guitars before it. Go-to Escovedo backup Karla Manzur, in tandem with Hogan, and Decemberists drummer John Moen completed the tactical rock squad.

Burn Something Beautiful, the captain’s 11th studio LP, begins on vinyl at Seventies bar anthem “Heartbeat Smile” and so too did his fifth appearance – beginning in 1983 with Rank & File, then 2002, 2006, 2010 – for the longest-running concert program on television. R.E.M.’s Peter Buck, who produced the new album along with fellow Seattle garage guru Scott McCaughey (here on bass), and a third Washington Stater in lead guitarist Kurt Bloch of defunct punk greats the Fastbacks fused with Escovedo’s down stroke and up went the True Believers’ wall of amplifier abuse. “I Don’t Want to Play Guitar Anymore” tapped into its author’s Alamo City soul, but the succeeding “Beauty of Your Smile” loosened a clipped, Les Paul stadium solo from Bloch, who contained himself only barely in segueing straight into a volcanic rendition of Escovedo hit “Castanets,” guitars crashing like redwoods – huge, majestic.

Dancers sprang to their feet and a palpable charge ripped through the room.

“Beauty and the Buzz” summoned the words of late Small Faces locals Ronnie Lane and Ian McLagan, the three six-stringers onstage knotting gnarly ahead of “Shave the Cat,” a glorious T. Rex-ramping throwaway meant only for turning up and blasting out. A heavy aquatic wobble to “Johnny Volume” and the monstrous, Johnny Thunders distortion of “Luna de Miel” summoned Burn Something Beautiful CD starter “Horizontal,” rumbling like a boulder as Bloch stabbed and steamed on the solo in a face-off with Escovedo.

Thirteen young Austin gals choired up first encore “Thought I’d Let You Know,” McCaughey pounding dissonance on a grand piano and Buck sitting on the drum riser wringing climbing shrieks from his instrument as the girls wafted a ghostly chorus, “We’re alone/ We’re not alone.” Dedicated to both Savannah Welch and today’s BookPeople mega guest Bruce Springsteen (“who was kind enough to let me sing this with him once in Houston”), third oldie “Always a Friend” ended the performance save for a redo of “Beauty and the Buzz.” Alejandro Escovedo, 65, can live anywhere he wants, but his guitars ring loudest here.

“I love you Austin, Texas,” he bowed at last. “Please remember that.”