Red Fang Sinks Its Hooks In

Red Fang has risen steadily over the last decade. Credit the Portlanders’ goofy videos, a dedicated road ethic, and their hooky, dissonance-spiked stoner rock landing on Late Show With David Letterman. Guitarist Bryan Giles called from San Francisco on opening night of a tour with Torche and Whores, all appearing Friday at Mohawk. 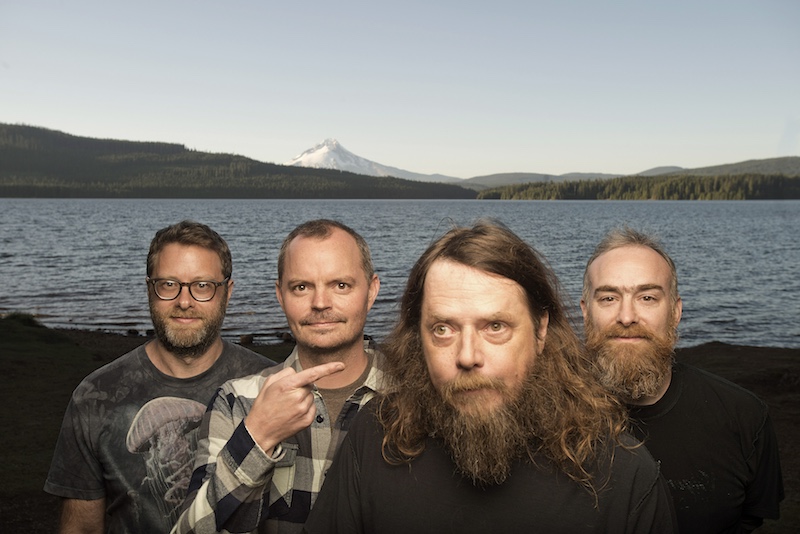 Austin Chronicle: Only Ghosts is the follow-up to Whales & Leeches, which is the album that put Red Fang in the public eye. Did you feel pressure in following that up?

Bryan Giles: I’ve never felt pressure to make music. The pressure is whether my bandmates are gonna be happy with what we’re doing. We’re the ones that have to listen to it every day!

But we’re enjoying it. It’s incredible. I’ve been playing music for, I don’t know – forever, it seems like. Thirty years I’ve been in a band, and it just keeps getting funner. The more comfortable we get with each other, the songwriting comes easier and more natural.

AC: You made this one with producer Ross Robinson and mixer Joe Barresi.

BG: Robinson is a force of nature. It’s incredible how hard he works at capturing the essence of a song. He really puts all of himself into it and asks you to do the same.

So it was an intense process, but really worthwhile. We lived in his house, so we’d wake up and start recording, doing 12-14 hour days for 30 days straight. But he was very inspirational, and really involved in trying to see where our headspace was.

Because he’s known for metal bands like Korn, some people have a disdain for it and thought we would become those bands. That couldn’t be farther from the case. I think his process is unique in that what he’s trying to get at is the most accurate version of you – not the most pristine, but the most honest version.

So I feel lucky to have had the experience working with him.

And having the record mixed by Joe Barresi. Man, I’ve been a fan of his for a long time. He mixed [the Melvins’] Stoner Witch, one of my favorite rock albums. More recently he did King Animal, that new Soundgarden record, which sounds phenomenal. To have his hands on something that I did – to say “flattering” would not be superlative enough.

When I got mixes back from him, I was like, “Holy cow!” Because we sent him kind of a kitchen sink, so many bizarre noises. We had what I called the pedal puddle, with 30 or 40 pedals, and we were making the most godawful noises. Which was fun as shit, but it was just thousands of tracks of garbage, and he massaged them all into what I think turned out really well. Having his ear on that thing was really important to me as well.

AC: What inspires you to write songs?

BG: I’ve always done it. I grew up in a musical household. I’ve been playing music since I was a little kid. I was an introverted kid, and I’ve remained fairly introverted. So I’ve always really treasured it as a way to be extroverted.

There’s all kinds of things that roll around in my brain that I would never tell my best friends. But I feel comfortable going to those places in my mind, and then screaming about them in a band setting. So it works for me. It keeps me levelheaded.

AC: Red Fang embraces melody, rather than just going for pure aggression. How important is it to you to have melodies that are gonna transcend it all?

BG: With this band, the only real music statement that we had was, we wanted to write songs that made us want to become musicians – not songs that make us happy from a musician’s standpoint. The bands I grew up listening to and the records I played over and over again were the ones that had memorable hooks. They had choruses and you anticipated the chorus, and it was a exciting experience. So that’s important to us.

AC: What music outside of hard rock and metal are you listening to and finding inspiring?

BG: I listen to all kinds of music. I like old country. Just last night I was listening to a record by a friend of ours, Matt Drenik. He’s in a band called Battleme. [Drenik once led Austin hard rock band Lions.] I was listening to their first record and it is super hooky. Sometimes it’s like a darker version of Justin Timberlake, just really cool atmospheres and stuff.

I like a lot of goth. I’m a big fan of Bauhaus, Nick Cave & the Bad Seeds. I just saw the Cure live for the first time last month, and that was an incredible experience. I think people are missing the point if they think it isn’t good music if it’s not a certain genre. I think if it hits you in the right place, it doesn’t matter if it’s disco or folk.

AC: A lot of metal bands these days remain underground, but you actually made it onto the David Letterman show. How was that experience?

It was scary, going in cold and playing one song for however many million people – many of whom have never heard of us before. So it was really intense, and I gotta say I was terrified, so it was sort of unpleasant. But it was also really exciting. I want to do that again. It’s like a really big adult roller coaster, and it lasts about the same amount of time.

I really don’t know if there was any impact at all. It would be hard for me to believe that we fell in the wheelhouse of many of the viewers. But if they gave us a chance, that’s great. The biggest thing that I got out of it was that I got in my mom’s Christmas newsletter. She was very proud of me, so it was a feather in my cap and I got top billing on the Christmas letter.

AC: Your profile seems to get bigger every year. How much of that do you attribute to working your asses off and how much of it just being in the right place at the right time?

BG: I’m not gonna discount hard work. I mean, we’re definitely committed to it. But I attribute a lot of our being on the radar at all to Whitey McConnaughy, the director for our videos. I think people being able to relate to us with those videos was a huge stepping stone for us. We really weren’t on the map at all until we released our first video. So I think that was a big one, but we continue to grind it out and grow.

We’re a slow-burn band. We’re not like a summer hit band. We play a club and there’s like 310 people. Next year we play that club and there’s 360 people. Which is great. I love a steady climb. I don’t think I could take instant success.

AC: What goals do you still want to reach?

BG: We just had a discussion about that: What do we want this band to do? I like where we’re at, this slow, increasing interest and growing as a band, but in a methodical and organic way, where I feel like our fans are obviously engaged with our music, and it’s not because of some big money machine behind us that jams us down people’s throats. We started this band just four dudes making songs, and we continue to be those same four dudes. The big goal for me is to continue to expand as a songwriter and explore new ideas and keep it fresh.

Anything goes and that’s what keeps you in a band for a long time. If you’re going to continue to exist as a band, you can’t sit on your laurels, because people forget about you. There’s somebody younger, more energetic, and better than you ready to take your place immediately, so if you wanna do it, you better keep your nose to the grindstone.