Return of the King: George Strait

Megastar plays Gruene Hall for the first time in 34 years

Starting out in Lone Star danceterias like Gruene Hall, George Strait hadn’t played the historic venue since 1982, a year after the release of his debut album. On Wednesday, in celebration of his new 3-CD Strait Out of the Box: Part 2, the King of Country Music returned to Texas’ oldest dance hall and delivered one of his most intimate shows in decades. 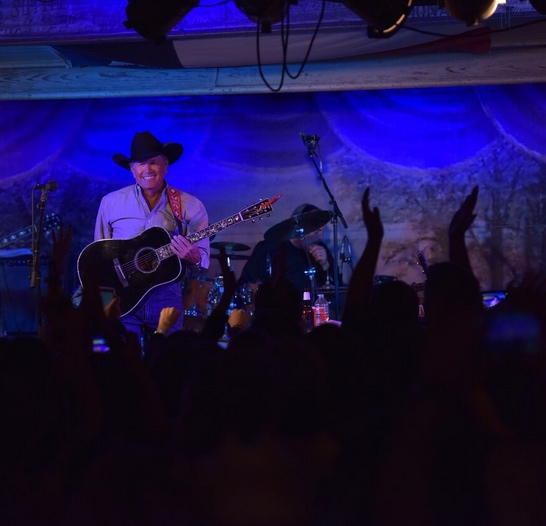 Only several hundred fans were lucky enough to score an invite to the live-streamed private performance, but scores of others packed the street outside to catch a glimpse of the San Marcos superstar, who officially stopped touring in 2014. Everyone within earshot was treated to a nearly two-hour, 28-song set of classic hits, two new songs, and a mid-set tribute to the late Merle Haggard.

Strait, 64, remains so consistently humble and genuine onstage, it’s easy to forget he’s had more No. 1 hits (60) than any other artist. Only Elvis and the Beatles have more combined gold, platinum, and multi-platinum records. The endless string of smashes he delivers live speak for themselves.

The singer took the stage with a wide grin, his 11-piece Ace in the Hole Band looking both excited and nervous to be packed together in such intimate proximity to the crowd. Openers “Here for a Good Time,” “Ocean Front Property,” and “Give It All We Got Tonight” quickly settled the band into a familiar groove, while Strait reveled in telling stories about getting his first shows at Gruene and playing for a 25-cent cover on Sunday afternoons.

“Here we are, back again. That’s a full circle now,” he offered, marveling that the dance hall hadn’t changed much since his days there.

Of course neither has Strait, who still delivers a no-frills show that celebrates his audience at every point. He particularly seemed to enjoy playing to them in such close quarters. His smiles and winks only boosted crowd-rousers like “How ‘Bout Them Cowgirls.”

The slower songs struck even more poignantly in the cozy setting, especially “I Can Still Make Cheyenne” and “Marina del Rey.” Strait’s low tenor remains in top form – aged, but smooth – and still cuts twang on “The Fireman.” In the Haggard segment, he offered up crowd sing-along “Mama Tried” and let the band roll enthusiastically through “Workin’ Man Blues.”

The salute to Haggard, and the encore’s breakdown of Johnny Cash’s “Folsom Prison Blues,” set a legacy-building theme for the evening. Strait’s never lacked for credibility, the Poteet native as authentically true to his traditional sound as his first go-rounds at Gruene, but his dominant success even as country radio trends shifted sets him apart from critically esteemed outsiders like Willie Nelson and Waylon Jennings. A new co-write with Jamey Johnson, “Kicked Outta Country,” suggested even Strait has suffered the fates of format fatigue.

Name-checking Haggard, Cash, George Jones, Kris Kristofferson and others throughout, the song proclaims that their “getting kicked outta country didn’t hurt a thing” for the artists who remained true to their music despite changing tides of popular country. Strait may embody the polar opposite to outlaw country, both in sound and personality, but he’s also never wavered or compromised his music. Ironically, the song could well land Strait’s 61st hit when it’s released this week on the box set, which is being sold exclusively through Wal-Mart.

The other new box set song offered a co-write with his son Bubba and longtime collaborator Dean Dillon, “You Gotta Go Through Hell,” a bluesy number highlighted live behind Joe Manuel’s acoustic guitar. Both numbers prove, like last year’s unexpected LP Cold Beer Conversation, that Strait isn’t done with his recording career, even if he’s greatly limited his live appearances.

Strait closed out the show with the fan tribute, “I’ll Always Remember You” and “Troubadour,” before returning to his first hit, “Unwound.” In an encore, Strait re-emerged even more energized, with the band taking turns through Bob Wills’ “Take Me Back to Tulsa,” sliding into a rollicking “All My Ex’s Live in Texas.” Cash’s “Folsom Prison Blues” chugged in homage, before Strait finally ended the night with “The Cowboy Rides Away.”

Since he’s a rare artist that can still reliably sell albums, it’s reasonable to expect a Live at Gruene Hall release at some point. Fans should hope so. The night offered George Strait at his best in a truly exceptional setting.

“Here for a Good Time”

“Give It All We Got Tonight”

“Check Yes or No”

“The Breath You Take”

“I Can Still Make Cheyenne”

“How ‘Bout Them Cowgirls”

“You Gotta Go Through Hell”

“Take Me to Texas”

“Take Me Back to Tulsa”

“All My Ex’s Live in Texas”

“The Cowboy Rides Away” 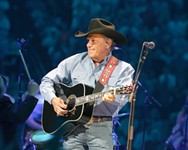 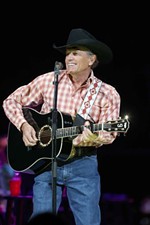 George Strait: The Cowboy Rides Away
The King crowns the Frank Erwin Center on his farewell tour