Bob Mould relies on a simple formula: smashing pop hooks and sweet melodies against a concrete wall of slamming drums and painfully loud guitar. Just after 8pm Sunday, after the rain stopped, he cleared a sonic path through a suddenly primordial Sherwood Forest. 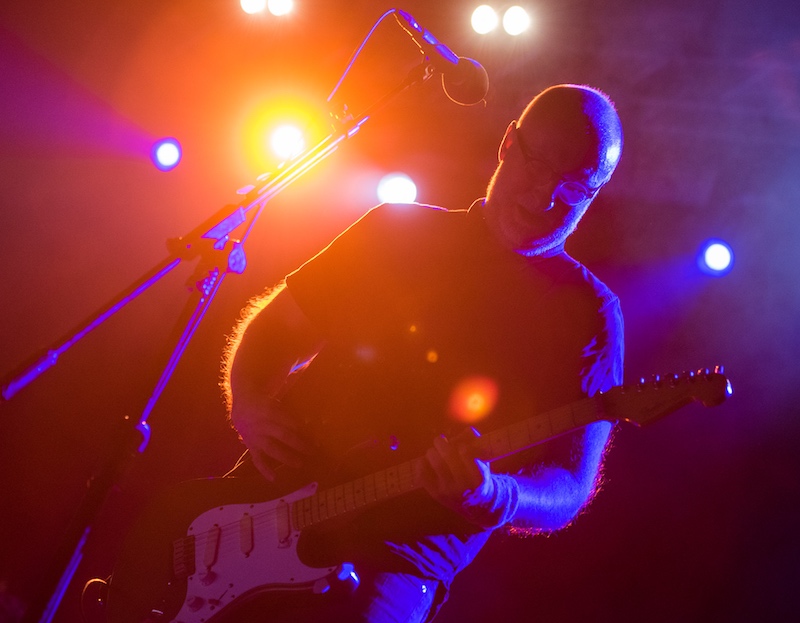 Mould’s pop/punk style has been done to death since the 56-year-old New Yorker mastered it leading Minneapolis’ college rock heroes Hüsker Dü in the Eighties and refined it a decade later in Sugar. He’s recently revisited the formula to widespread acclaim on a trio of solo LPs. All prove there’s good reason for their author’s lack of stylistic deviation: Nobody – and we mean nobody – does it better.

Besides his distinctive guitar playing – drone notes in even the easiest chord progressions – Mould simply writes better melodi-punk than anyone working. He ought to, given his 35-plus years of practice. That means songs taken from his latest album Patch the Sky had the same crowd-pleasing impact as tunes drawn from the Dü and Sugar inventories.

Hiding behind previous act Baio’s gothic smoke and lighting, the bandleader and his five-years-strong rhythm section roared into “Flip Your Wig,” more brutally powerful than Hüsker’s original. Skipping any stage banter, the trio kept up a relentless pace, zooming through the new LP’s “The End of Things,” Sugar’s “If I Can’t Change Your Mind,” and the Dü’s “Chartered Trips” with the same energy and commitment as a band 20 years younger.

Ending on a shredding take of the recently revived Hüsker gem “In a Free Land,” Mould and company proved that the might + melody equation – in the correct hands – can be as righteously rocking now as it was three decades ago.