On Saturday, Youth of Today frontman Ray Cappo drove to Sherwood Forest Faire from Houston, where he had taught a six-hour class on yoga philosophy. “You know what I spoke about? I spoke about the principles of yoga,” Cappo, who dove off speakers and kamikazed to the band’s razor-sharp NYC style hardcore at the end of Sound on Sound Fest’s second night, explained to the audience. “Everything I’m saying in these songs, I spoke about tonight. That’s why I know what I’m saying between songs and never prepare set-lists.

“This is just the same shit I’ve been singing about for 30 fucking years in a different format: I tell these people to slow the fuck down.”

While the band’s Krishna-informed messaging says “Slow Down,” their music – executed by founding members Cappo (vocals), John Porcelly (guitar), plus drummer Sammy Siegler (who joined the band in the mid-Eighties at age 12), and blue-chip bassist Walter Schreifels – played as fast and furious as their classic 1986 LP Break Down the Walls. That album, forever in a place of prominence on the NYHC mantle, provided the bulk of Youth of Today’s Saturday night performance, which including inspired versions of “Make a Change,” “Thinking Straight,” and “Take a Stand.”

Throughout the straight-edge legends’ 50-minute appearance, which followed stands at Chaos in Tejas in 2011 and Fun Fun Fun Fest in 2012, Cappo – typically possessed and electric in his workout clothes – came on like a combination life coach and spiritual advisor. Back-dropped by a gorilla fist with an “X” on it, designed and projected by local artist Bob Mustachio, Cappo led into “No More” with the vision of a world where we appreciate God-like elements present in man and nature.

“Just 200 years ago you could go to Pittsburgh, put your mouth in the river, and drink that water,” offered the frontman. “For millennia it was like that. You could drink the Hudson River. Wouldn’t it be incredible if we could treat this Earth as if it were divine? 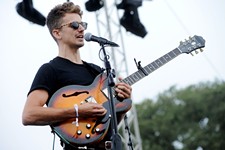