Fucked Up frontman podcasts from Sherwood

Slotted between the Air Sex Championships and a wedding officiated by Circle Jerks/Flag/Off! frontman Keith Morris on the anything-goes Globe stage, Fucked Up screamer Damian Abraham presented a live version of his Turned Out a Punk podcast at Sound on Sound Fest on Saturday. 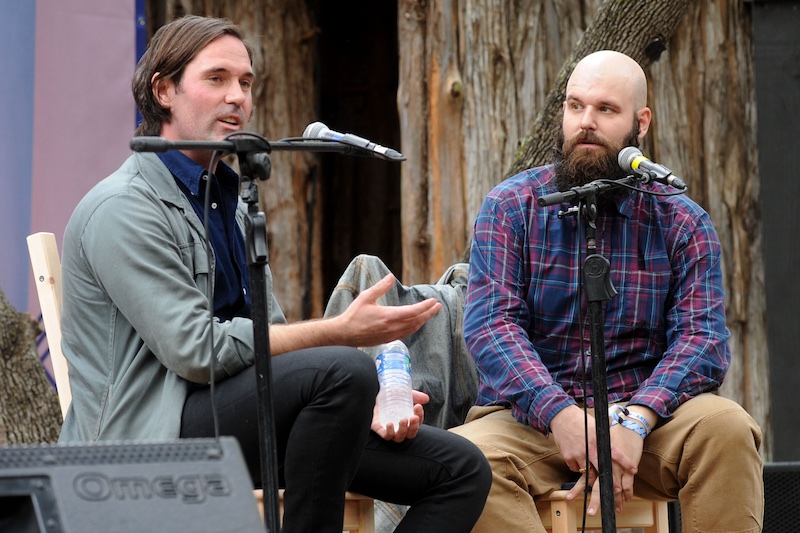 The audio show – music nerd debates (“How can the Misfits simultaneously be the greatest punk band ever and not a punk band at all?”) and unfiltered storytelling by musicians (sometimes from wrestlers) – always launches on the same question: How did you get into punk?

Abraham, now a father of three and increasingly svelte, described the podcast as “a celebration of all the shit people would find abhorrent about punk rock nerdism – collecting records and all that bullshit.” Live footnote editor, ex-Tear It Up/Dead Nation singer Dave Ackerman considers the two-year-old program divisive, noting, “Either it’s really up your alley or it couldn’t disinterest you more.”

Saturday afternoon’s live taping, attended by roughly 120 festers, featured several unannounced guests including Chris Slorach, bassist for Canadian noise-punk breakouts Metz, who spent his segment recounting the Toronto hardcore scene he and Abraham came up in. David Kelling, disarmingly hilarious singer for fellow SOS performers Culture Abuse, used his time with the talking stick to contend that the Beastie Boys’ debut EP and Rancid’s self-titled 2000 LP are the best hardcore releases ever – superlatives that caused Abraham to express his wholehearted disagreement with measures of enthusiasm and diplomacy.

The most compelling conversation fell to Abraham and WWE wrester MVP, who was turned on to punk as a teen just before catching an 18-year prison sentence for alleged armed robbery and kidnapping, of which he served nine.

“I had just absolutely fallen in love with the Bad Brains,” began MVP, a regular on TOAP. “Zach and Donnie Blair turned me on to Fishbone with a cassette. [Author’s note: Zach Blair is an Austin resident who plays in Rise Against, Drakulas, and was previously in Gwar, Only Crime, and more.] All of sudden, I’ve got this whole new avenue of music and this is before the label of alternative existed.

“I ended up getting locked up just as I’m falling in love with this genre, going to shows, and coming into my own as a teenager. Now I’m in prison where all you get is 94.9 KROC or whatever. Sometimes, if you hold the radio just right you could get a college station.

“I was in confinement for this bogus case where the officers had set me up and I’m sitting on my bunk. I had my radio and heard the opening chords [sings Nirvana’s “Smells Like Teen Spirit”], and immediately went, ‘Oh shit! This is the closest thing on mainstream radio compared to the shit I was into!’

“I was in my cell bouncing off the walls!”

As MVP recounted his punk history (and close friendship with "Macho Man" Randy Savage), Abraham turned giddy, telling the audience, “Listen, I’m not plugging my podcast here, but the episode where MVP and Zach Blair recount the Macho Man showing up to fight the Misfits...

“I mean, I was happy when my children were born, and that story is just below that!”

As with everything he works on, Abraham’s genuine enthusiasm led to several golden moments at Sound on Sound – and you can bet that generated interest in the podcast. This writer, even as a more-than-casual Fucked Up fan, had never laid ears on Turned Out a Punk. After Saturday’s live edition, I’ll make up for lost time as soon as I get out of these woods and back to cell phone civilization. 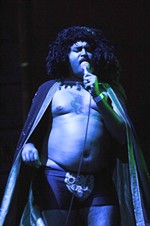