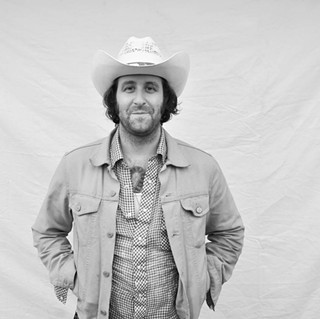 "The Boys" are implied: Corey Baum aka Croy (by Steven Alcala)

The locals’ heartland honky-tonk was handsomely realized by capital city dynamo Adrian Quesada (Brownout, Echocentrics, Spanish Gold, ex-Grupo Fantasma) at his Level One Sound recording studio. Since opening the facility early last year, Quesada’s made one request to the bands he’s working with: Cook up a spontaneous cover for his forthcoming Live at Level One compilation.

“The idea was to have some fun, show off some influences and the aesthetic ‘vibe’ of the studio,” wrote Quesada about the project.

Croy & the Boys’ contribution to Live at Level One is a send-up of Marty Robbins’ classic western ballad “Saddle Tramp.”

To learn more about the lifestyles of saddle tramps, we called up Corey Baum.

Austin Chronicle: Why was “Saddle Tramp” a good song choice for Croy & the Boys?

Corey Baum: As a country band, we have a fuck-ton of covers, but we’d never played that song. Maybe that was part of the attraction – that we could invent it in the studio. Our keyboard player at the time, Dan Patrevito, brought up the idea of covering it.

I don’t even know if he thought about the fact that I’m a biker and bikers are also called “saddle tramps.” I thought it was a cool idea to update it a little bit, so we gave it a Tex-Mex-y, driving feel. To me, that makes it slightly more of a biker song than a trail ridin’ song.

AC: Right, it’s about a free-spirited drifter with a song to sing – doesn’t matter if he’s on a horse or a Honda.

CB: I ride a Harley.

AC: Noted. Tell us about working with Adrian Quesada.

CB: It was awesome from the get-go. When I approached him to do our full record, I hit him up and said, “You operate in this traditional music realm, but you fuck with the sound of it and that’s what I’m trying to do with country music.” At the time, I didn’t realize he was recording the Sword, nor I didn’t realize how much Brownout was blowing up.

So as soon as I asked him, I started getting really nervous, thinking I’m so out of my league trying to work with Adrian. Then he came back with so much enthusiasm about it. The project turned out awesome.

I really like working with producers who have their own studio, because when you rent studio time, you have deadlines and it’s like this panic: “Oh fuck, we have to get this done in five days – anything else is gonna cost more!” When you’re working in the producer’s own studio, it’s all up to them. Adrian took on the project for a fee.

If we were having a bad day, you just call it. If you can’t get the musician you want today, but they’re available next week, you do it next week. It never felt like anyone was there to make money. We were all just making a record.

AC: I’m a fan of your funny garage duo Dumb. Is Croy & the Boys the new Dumb? Is Dumb dead?

CB: No, not at all. I moved down here with the stage name Tabor Maine. It was kind of an outlaw, folkie, country thing. I feel like Dumb started as a fun outlet as opposed to my serious and heavy songwriting.

It’s so easy to make records in that genre, because they can sound however shitty they have to and no one cares. Dumb was always the side project, but it was so much easier to put out records that the output started to outpace my country and folk stuff – which I considered my more serious songwriting.

Now there’s a label in New York called Axis Mundi Records that hit us up out of nowhere to put out Live Fast, Die Dumb on vinyl. We then sent them this unreleased full-length that’s just been sitting around for a year and they loved that too. There’s no date set, but in the next three months probably we’re going to have a double LP release with Live Fast, Die Dumb as one record and this brand new one called Less Dumb is the other.

So Dumb’s not dead. It exists side-by-side with Croy & the Boys.

AC: So if someone wants to introspective, personal songwriting check out Croy & the Boys. If you want to hear topical songs about getting fellated around the world or dying on I-35, check out Dumb.

CB: Yeah, those are the kind of songs that will be on the new record.

AC: Croy & the Boys gets billed as “Midwestern honky-tonk.” What’s the distinction? Is it less twangy than Texas honky-tonk?

CB: It might be a little less twangy. With the idea of wanting to have fresh sounds, there’s notably no fiddle or pedal steel on this record. Those are two trademark sounds of country music, generally. Growing up, I really liked the heartland rock: Springsteen, Mellencamp, Tom Petty, Seger. I love that stuff just as much as I love country.

I also make that distinction because I’m not from Texas and I don’t want to fake the funk. I love Texas and I love making this music down here, but I’m not trying to be anything that I’m not. I’m definitely a Midwestern dude all the way.

AC: When can people get their hands on Croy & the Boys’ new album, Hey Come Back? And when can they can see the band live?

CB: The record comes out online, internationally, October 28 – this Friday. We’ll be celebrating it with a record release the next night. Unfortunately, it’s the same night at Brownout’s record release, so Adrian won’t be there. He’ll be at Scoot Inn and we’ll be at Hotel Vegas. Rattlesnake Milk opens it up, Ramsey Midwood will play, then we’ll close it out. 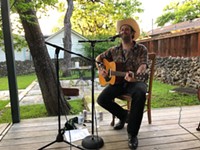 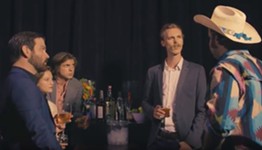