Comedian emcees who no one’s written jokes for. Olympian musicians reading lyrics off a huge teleprompter. Pretending it’s New Year’s Eve, because that’s when the taping airs. Even so, Austin City Limits’ third annual Hall of Fame induction ceremony proved worth almost every minute of its three hours on Wednesday night at the Moody Theater. 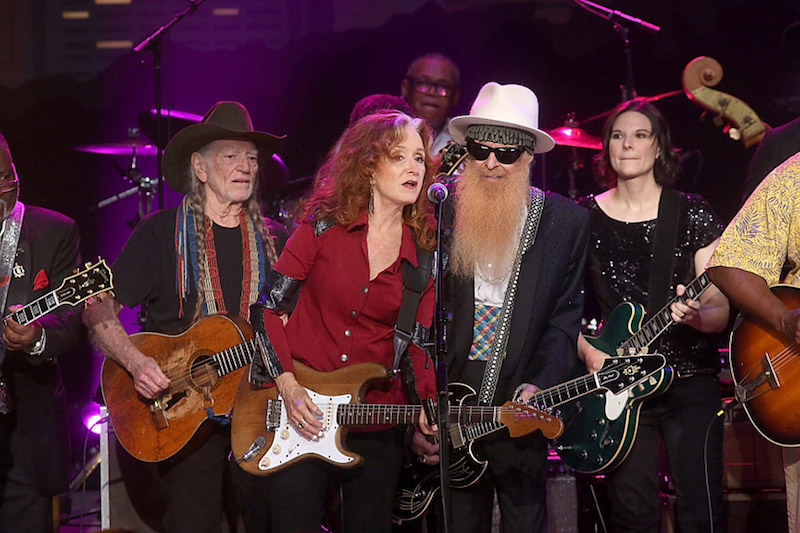 If Willie Nelson himself can shout out “Happy New Year” on Oct. 12 – sporting a proverbial shit-eating grin – then who are we to pretend any different?

Brownsville-born military scion, Kristofferson, 80, wobbled on and off-stage first and quickly in accepting his crystal ACL skyline trophy, but the Highwayman’s ordination by Rodney Crowell more than filled his Rhodes scholar quotient. The Houston kid’s introduction following a brief video bio preceded his rousing pair of prize Kristofferson copyrights, “Chase the Feeling” and “Help Me Make It Through the Night.” Both songs aligned the pair of Texans – rugged, sensitive, knowing.

“Kris made male vulnerability a very seductive tool,” nodded Crowell. “I thought, ‘That guy knows how to get girls.’”

So did the band behind him and everyone else last night: bandleader and ACL Hall of Fame inductee in his own right, steel driver Lloyd Maines, guitar tamer David Grissom, Chris Gage on piano, and Robert Earl Keen’s veteran rhythm duo, Bill Whitbeck on bass and drummer Tom Van Schaik. When Crowell ceded the stage to the initial honoree, who made his way gingerly through “Loving Her Was Easier” and “For the Good Times,” the show band gently nudged Kristofferson to his standing ovation. Unbelievable wasn’t the fact he’d have stumbled without the words scrolling up a screen, but that he could read them 25 yards away!

Willie, who then sank his sweet-n-sour tenor into “Me & Bobby McGee,” mostly ignored the lyrical script for a game, wily reading of the Janis Joplin keepsake, his trademark modulation of syllables, bon mots, and whole lines putting accents where no other singer would fathom.

Mavis Staples, 5 feet high but 10 feet tall, spoke to the enduring strength and sensuality of Bonnie Raitt, whose takeaway in that moment appeared far less her local TV enshrinement than a bear-hugging reunion with her episode partner in the program’s season 38. The two, seated side by side, held hands during a Delta-dredging moan through Bob Dylan’s “Well Well Well,” the description Staples bestowed on Raitt applying to both: “Earth Angel.” Taj Mahal sat in next with the latter on a freight train blues (“Gnawin’ on It”), but Raitt’s third guest misted the entire sold-out home of Austin City Limits.

Willie mostly read through Stephen Bruton’s “Getting Over You” and swallowed a couplet or two, but in reprising the duet from his 1993 catalog keepsake Across the Borderline, the Red Headed Stranger provided the kindling for Raitt to apply her wicked slide guitar chill bumps, while also letting her craggy siren cry range deep into the pulpy melancholy of the late author’s finest composition. She and Staples capping the mini set with the former’s Nick of Time smash “Thing Called Love” brought the house down.

After an intermission and Peterson’s moment in front of the camera instead of behind it, the rest of the show belonged to the spirit of B.B. King (1925-2015). From the late blues sovereign’s backing band through to Austin garage-blues queen Eve Monsees’ delightful spark in teeming with her initial guitar partner, Gary Clark Jr., the soul of capital city blues lit up like 1,001 nights at the genre’s homegrown shrine, Antone’s Nightclub. Tribute fuse Billy F. Gibbons loaded up the ride circa 1958.

“B.B. told me learn to play what you want to hear,” recalled the ZZ Top frontman. “Pretty solid information, that.”

Sure enough, Gibbons chopped through “The Jungle” with precisely what he always wants to hear: a gut-bucket, six-string smear of the blues almighty. Raitt and Clark engineered “The Thrill Is Gone” as King’s beefy octet drove a turbulent rhythm through the tune, she electric and he dressed like Lee Van Cleef from some spaghetti Western. Clark then laid into “Three O’Clock Blues” to reassure all present that Lucille – B.B.’s axe – had clearly passed the torch to the Austin-born burner.

Willie capping the show by picking and grinning his way through “Night Life” as if King himself was still a budding folk-blues scholar hungry for the world outside his plantation origins left Clark shaking his head in disbelief. More than half a dozen guitars marched straight to the promised land on grand finale “Every Day I Have the Blues.” At the last, no one sang “Auld Lang Syne” with more gusto than Kris Kristofferson.

Happy New Year, townies. 2017’s off to a rocket start inside these Austin City Limits.