Once again, the morning escapes me. Six days into this adventure, I can no longer blame jet lag. In this case, some 3am revelry prompted me to sleep past noon at my hotel in Angers, France. I’m late for Austin Week’s final event, a Sunday closing picnic with Austin acts and Texas-style barbecue. I hasten my mile walk to the riverside party, but get distracted by the mouthwatering sight of an eight-block-long rummage sale, brimming with pipes, paintings, books, boots, statues, silver, and – my obsession – records. And I’m not the only one late for lunch.

Flipping through a bin of vinyl where I’ll soon mine platters by Italian composer Ennio Morricone, French chanteur Joe Dassin, and romantic singer/guitarist Georges Moustaki, I spot Black Angels vocalist/bassist Alex Maas. Bonjour! Just the night before I’d seen him onstage at Levitation France, a Euro version of the psychedelic gathering he co-founded in Austin.

On Saturday night, Maas performed without his Angels, opening his set with a solo version of Nancy Sinatra’s “These Boots Are Made for Walkin’” that showcased his radiant vocals. Soon adding Austin’s Bob Mustachio – ex-drummer for the Warlocks and, often, the third eye behind Levitation’s light shows – on the kit, Maas floated through a phase of slightly folkie, reverb-spiked songwriter pop highlighted by a beautiful take on 2012 Black Angels Record Store Day single “I'd Rather Be Lonely,” probably the poppiest gem the group ever committed to wax.

The encouraging French crowd screamed “Al-ay-ex! Al-ay-ex!” during a muddy middle section, during which Maas traded his hollow-body electric guitar for a bass. Meanwhile, the surprise hit of the gig was the Austinite handling a taishogoto, a Japanese lap harp with strings and buttons. Mustachio hit upon a body-moving beat, Maas playing Middle Eastern scales on his curious axe, with Spaceman 3’s Peter Kember tossing in electronic atmospherics.

The crowd jumped, danced, and threw their hands aloft to Maas and company’s feel-good finale. Nevertheless, the most significant showing by an Austin group at Levitation France had occurred the previous night.

“We’re going to space, motherfuckers! Step on board. Step on board!” shouted Zapot Mgawi at 1,000 riled-up Europeans, sweat beading down his painted face onto his cosmic robe.

The masked band’s big-stage omnipresence at the indoor fest may have been the most telling 45 minutes of their three-and-a-half-year existence because it confirmed something many of us expected: If you put them in front of a festival crowd, they will win them over. On Friday, Golden Dawn Arkestra mesmerized a crowd that probably didn’t know if they were a cult or a Cirque du Soleil segment. From the opiate weight of “Stargazer” to vibraphone/vocalist Eyesus of Devices’ transfixing glow hoop gyrations and global groove closer “Masakayli,” the big band didn’t lose anything in translation.

On Saturday afternoon, Austin Week – the cultural exchange program presenting our hometown’s culture in Angers – invaded the grassy castle courtyard of Anger’s Le Musée des Beaux-Arts for a diverse three-band showcase of Austin music. Cunning songwriter Ethan Azarian and his saw-fiddling/telephone-singing ally Jeff Johnston thoroughly entertained the 200-plus spectators. Their simplicity, underpinned with oddball humor and subtle truths of life, resonated with a crowd that was 20% children, 50% upstanding French citizens, and 30% afternoon beer drinkers – many Austin delegates counting in the latter category.

“It’s a real pleasure to play in Angers,” announced Azarian. “We don’t know how to speak French and we didn’t know where Angers was, but the modern miracles of planes and technology have brought us here.

Pedal steel picker Bob Hoffnar maintained the magic at the cloudy concert, which resembled KGSR’s Zilker Park tradition Blues on the Green if it were smaller and surrounded by ancient architecture. His experimental lounge force Mood Illusion hot-wired pop standards so fine that a Frenchman in a beret – which isn’t as common as you’d expect – informed me, “I play the pedal steel, but I have never seen anyone play like that!” 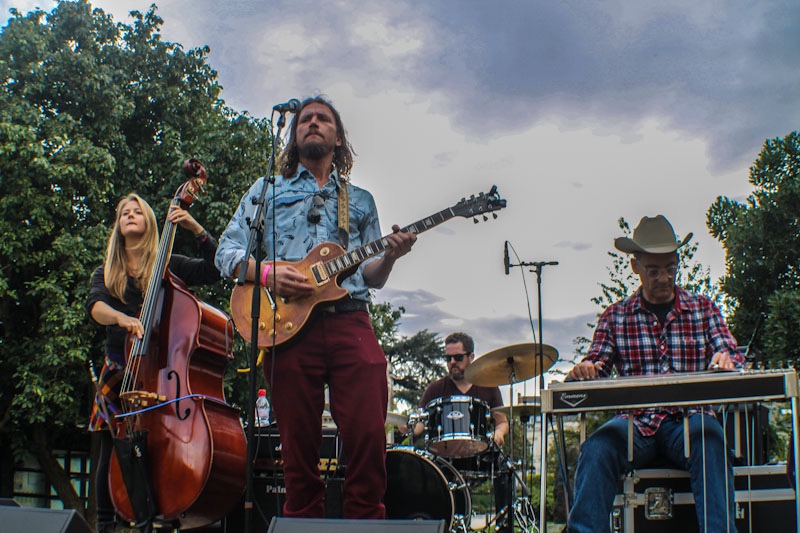 Shotgun Two-Step: Doug Strahan and his band prompted boot-scootin’ a continent away from their hometown Austin digs. (Photo by Kevin Curtin)

The scene was so explicitly Texan that all the wine in the courtyard turned into Lone Star and the horizontally-striped shirts transformed into pearl snaps. Even the nearby cathedrals began to look a little like roadhouses. The French ate it up.

And why not? This was the Texas they recognized – the style, the sound, the bravado. Austin Week, true to the concept of a cultural exchange, offers a wide scope of Texas lifestyle and expression, but sometimes you just have to serve them brisket.

That reminds me, I’m late for a barbecue.