Austin’s ones that got away headline in Denver

Austin’s cup runneth over with roadshows and festivals, but still, we the club-going faithful pine for singular acts whose tours don’t route through our concert capital. Like love, music’s often about the ones that got away. 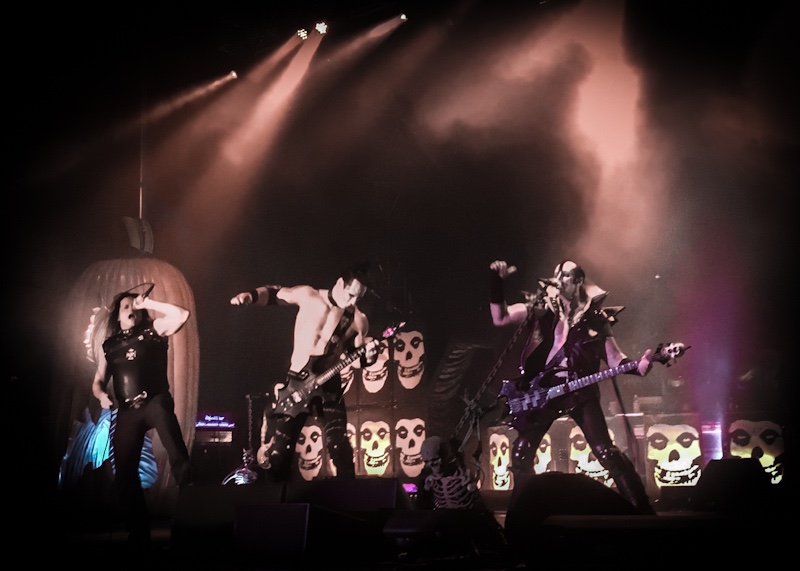 Sometimes, the most talked-about shows are ones that never happened. Recall the controversy over Glenn Danzig’s aborted “Legacy” performance at Fun Fun Fun Fest in 2011. The horror rock pioneer, late to the stage, plowed through his solo work and Samhain material, but ran out of time as he started the coveted Misfits portion of the set.

The ensuing fallout turned his diva demands of french onion soup into a solid gold local punch line, but deep down we all wanted to hear the “Evil Elvis” sing those classic punk songs.

In a similar vein, Ween got booked for Levitation this past spring. The show would’ve been the first Texas sighting for the recently reunited alt-cult since 2011. When the festival was canceled, so too disappeared the booking.

When the “Original Misfits” – core triad Danzig, Jerry Only, and Doyle Wolfgang von Frankenstein – were trumpeted as headlining Denver’s Riot Fest, sharing a stage for the first time since 1983, that alone was beyond temptation. Throw in another headliner with Ween, and suddenly making the 800-mile trek to Colorado wasn’t a tough decision. It was destiny.

“It smells like a fuckin’ 4H Festival in here,” Dean Ween observed after his band sniffed out a couple feel-good openers with “Fiesta” and “Mister Would You Please Help My Pony?” on Saturday night.

The guitarist was mistaken. The overwhelming odor suddenly fumigating the grounds at Denver’s National Western Complex was dog food. The Purina factory, a couple blocks away, had made its presence known.

Perhaps it was the Puppy Chow in the air that instigated a playful mood from the Pennsylvania quintet. Eschewing a normal festival set of greatest hits, they turned their heavy-lidded gaze to deep cuts. Brilliantly microwaveing obscure catalog nuggets, first they attacked an epic “Captain Fantasy” off 1991 sophomore album The Pod, then crunchy freakouts “Licking the Palm for Guava” and “Mushroom Festival in Hell” from debut LP God Ween Satan.

They even channeled Rush with unreleased mostly-instrumental rarity “Final Alarm.” The few hundred obsessives gathered in front of the stage howled, casual fans scratched their heads, and Gene Ween – now snow white, husky, and reserved onstage – fist-bumped his non-blood brother Dean, who peppered the performance with a running joke appropriate for a band that’s been broken up four years:

“This is a song we haven’t played in a really long time.” 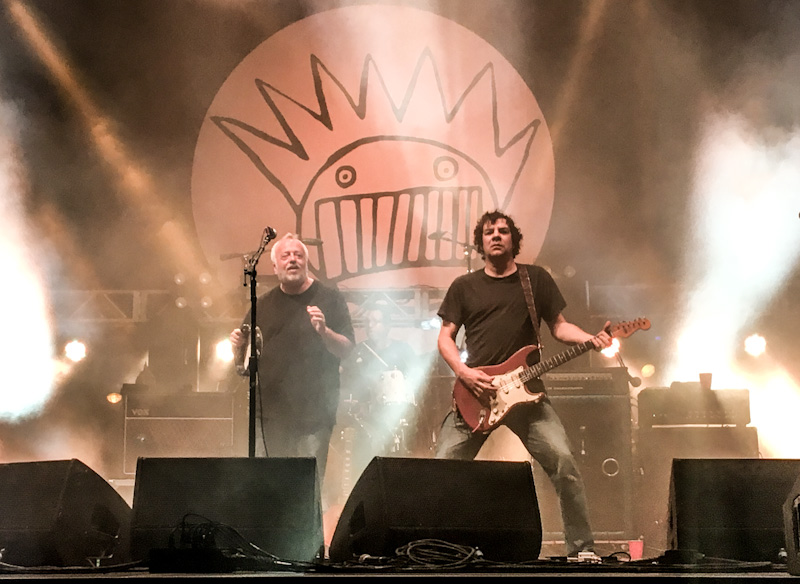 It's gonna be a long night: Gene and Dean Ween (Photo by Kevin Curtin)

While the band occasionally drifted back into well-trodden territory like “Your Party” and “Spinal Meningitis,” their weekend highlights were accompanied by off-road excursions. Most notable was a 20-minute talk-box-addled hybridization of “North Pappy Flappy” and Prince tribute “L.M.L.Y.P” (Let Me Lick Your Pussy). It was during that instrumentally nimble freak-funk sex trip that the post-reunion dynamics of Ween became apparent: Dean calls the shots onstage and Gene’s along for the ride.

Over the Labor Day hiatus, the band was better for it. With the scent of dog food and legal weed commingling for a unique potpourri, the duo captured a final magical moment with “She Fucks Me” and “Tender Situation.” Finally, Dean called for “Ocean Man” as the closer to appease Poseidon, who was threatening hurricanes back east.

Twenty-four hours later, Riot Fest looked like underground catacombs. Roughly one-third of the tens of thousands in attendance wore T-shirts screened with the Crimson Ghost, aka the Misfits skull. Danzig, Doyle, and Only, backed by guitarist Acey Slade and departed Slayer drummer Dave Lombardo, took the ghoulishly decorated stage to deafening cheers and blasted through faster-than-the-album takes of “Death Comes Ripping,” “20 Eyes,” and “I Turned Into a Martian” before a slightly out-of-breath Danzig offered a history lesson.

“Let’s see. About 40 years ago, Jerry and I got onstage in New York and we shocked the whole fuckin’ punk scene,” recalled the singer. “They didn’t know what the fuck to make of us. We didn’t look like anybody, we didn’t sound like anybody. We were angry and pissed off, we dressed in all fuckin’ black, and we were always getting in fights and getting in shitloads of trouble every fuckin’ night.

“That’s pretty much what punk was back then: getting fucked up and fucking people up!”

“Have you ever thought about killing somebody?” he asked the crowd at one point. “I know there’s two or three of you who have!”

“How do you like our pumpkins? Pretty fuckin’ cool, eh? How would you like to have that as your Halloween decorations? Your neighbors would bitch, but you’d say, ‘Come and take it down! I’ll fuckin’ kill you!’”

Early on, Danzig promised the set list would represent all eras of the band, but they didn’t touch any Michale Graves material like “American Psycho” or “Dig Up Her Bones.” Instead, it was all classics with the best moments coming from “Where Eagles Dare,” “Hybrid Moments,” and “Last Caress.” Their renditions, visualized by Doyle’s muscular monster stomps and Only’s ear-to-ear grin, were near perfect, the only evident misstep coming with a slight vocal flub in “We Are 138” and failure to fit in mandatory classic “Attitude.”

All told, it was better than anyone could expect a reunited ’77 punk band to sound and worth every penny of the likely six-figure payment that Riot Fest doled out for the band to play the event’s Denver and Chicago iterations. For those who missed the group’s first gig in 33 years, the Misfits hit Illinois on September 18. For this writer, the event was a reminder that even if Austin is the land of plenty musically, you still sometimes need to break orbit to see it all.

Better still, like any good vacation, I came home with a souvenir. After the Misfits closed with “Night of the Living Dead,” Lombardo threw his drumsticks into the crowd. Utilizing every inch of my 32-year-old white guy vertical, I caught his final toss out, coming down on my back with the stick as a zombie-like horde of savage Misfits fans swarmed me for it, stomping my legs, and trying to rip it from my clutches.

Ultimately, I limped away with a keepsake of one of the decade’s most historic punk rock reunions. 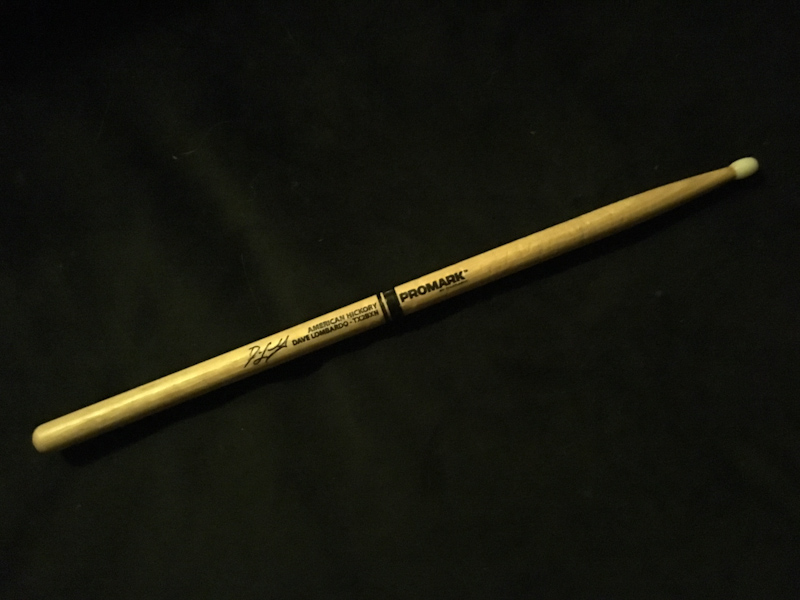 Where the Wild Things Roamed: Visiting "The Misfits" Shooting Set
Savlov visits the set of John Huston's "The Misfits"