Given a 10-day forecast of rain, the weatherman predicts a brief respite Friday and Saturday – the former just in time for Def Leppard’s return to Circuit of the Americas. Enjoying a brief respite before kicking off the next leg of their North American tour, 58-year-old axeman Phil Collen took time to chat about integrity, longevity, and hating hair metal. 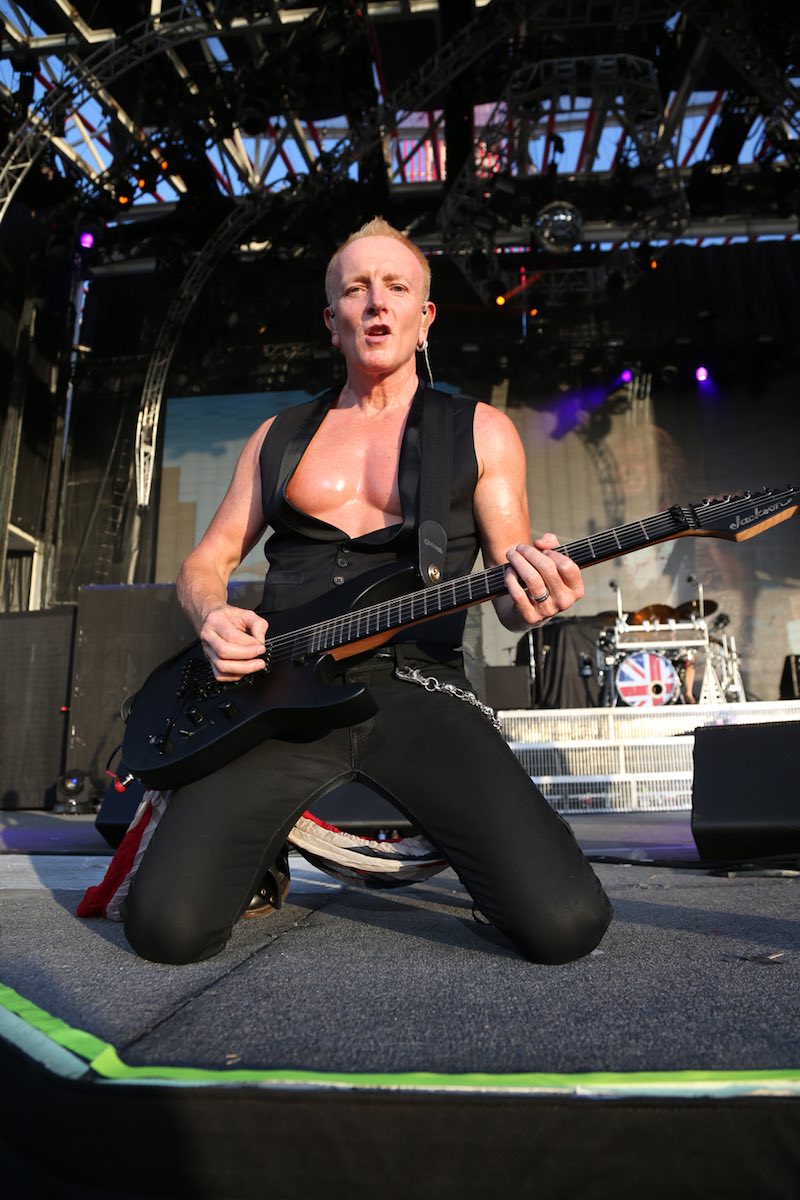 Austin Chronicle: Where am I reaching you?

Phil Collen: I’m at home in Long Beach, California, watching my wife get her hair done. We’re on a break, and then we kick off the tour again Saturday in Wisconsin.

AC: How long have you had off?

PC: Just a couple of weeks. Actually, most of that time I’ve been up in Sacramento, producing the new Tesla album. It wasn’t really a break, more of a road trip. We’re doing most of it on tour, backstage. We have a trailer and we do guitars in there. You can do everything on the computer now, so that makes it so much easier.

AC: That’s an apt example of how the record industry is basically non-existent now. Do you have any apprehensions when making a new album?

PC: This is a really weird thing, but Ian Hunter – I played guitar for him once, years ago – he actually said this little nugget of advice. He said, “Men stop worrying about stuff when they hit 55.” I thought, “Oh, that’s a weird thing to say.”

I was in my 30s at the time or something like that. But you actually do stop worrying as you get – and I don’t want to say “older” – as you become more experienced, wiser. You really don’t care what a 20-year-old thinks about your style or this or that, or what a girl thinks about you.

I think something like that happened with Def Leppard. Yeah, you get tarnished, and they’ll put us in the same bracket as all those awful hair bands from the Eighties, but we were very different. We had a lot of substance. We put a lot of effort and time into those albums, along with [producer John] “Mutt” Lange, who said we had to make something classic. And we feel there was some integrity there that didn’t exist elsewhere.

AC: I think the reason you still have such a huge audience is because you never really fit into the hair metal trend.

PC: I’ve got to give credit to Mutt Lange. Even back then, he said, “You can either be an ordinary, good band, or you can try to achieve greatness. But that takes a lot of hard work.” So that’s really what we did. We actually put that extra work in.

AC: When did he suggest that?

PC: He actually said it on Hysteria, after the success of Pyromania. All of a sudden, we sounded different than other rock bands. It really happened right around the time of MTV. We were a rock band that had crossed over into a pop audience. We were like Duran Duran with loud guitars and drums.

Hysteria was pushing that boat out even further. It was actually bringing in different influences, everything from the Police to more current bands like Frankie Goes to Hollywood and stuff like Prince and Michael Jackson. A lot of rock bands didn’t do that. We embraced the MTV generation and ran with it.

Again, that’s why I hate the hair metal thing. It really lacked the talent. There was no inspiration in any of that music. It was just karaoke with hair products.

AC: Being in such a guitar-heavy band, was the shift toward more pop-oriented songwriting hard for you?

PC: I want to be in a great band that’s unique. I want to give credence to this song, as opposed to “me, me, me.” And from very early on, we all adopted that kind of attitude. And that really did help, because I still meet a lot of musicians who are really one step from a roadie. And I don’t mean a guitar tech or a technical crew person. I mean a roadie, who just drinks beer and tries to score girls and whatever.

You see that with a lot of musicians. They don’t put enough effort in. It’s still all about them. It happens in every genre, even in sports and everything like that. You just meet assholes who think it’s all about them. I think we approached it in a different way with Mutt Lange.

We’re like a hard rock version of the Beach Boys, because we have all these backing vocals around it as well. We felt that whole thing was great. It was like Queen meets AC/DC, hard rock pop songs. And that’s really what we tried to achieve.

AC: The Beach Boys analogy makes a lot of sense.

I’ve always said that we’re actually more like Earth, Wind & Fire than we are like Metallica. They just approach it from a funk thing, and we’re a rock band. But you look at the songs, and the hooks, and the melodies, and all that. When Earth, Wind & Fire come on, I go, “Wow, this is kind of like Def Leppard.” It’s the same kind of thing, just a different genre. And it really makes a lot of sense when I hear that stuff. There’s a hook every minute, like in a Beatles song.

AC: Def Leppard produced its new self-titled album, but I hear the same enormous sound that made Hysteria such a huge success.

PC: I agree. Normally when we’ve done albums over the past few years, we give ourselves a briefing: “Okay, this is going to have a bit of this flavor to it.” You see bands and artists doing it all the time, like Bon Jovi or Don Henley. They start doing, like, country stuff, which is kind of ironic, considering the Eagles invented a new brand of country-rock, and it was kind of disappointing for me to see Don Henley pander to the trend of doing fake country. Same with Bon Jovi. But everyone does that a little bit, and we were guilty of that as well.

On this one, we actually weren’t. We just let it flow. If a song needed to be a pop song, we let it be that. It could be on the same album as a rock song, or “Let’s Go,” which originally was very poppy, almost boy band-y. We just turned it up and made it more aggressive, because that’s what it needed.

AC: It sounds like you and Vivian Campbell have a pretty democratic relationship when it comes to guitar playing on this album.

PC: It’s whoever comes up with the idea. When Vivian joined the band, it was very obvious that it’s like, “You’re coming into this, so you have to adapt to the style of the band.” When I joined the band, I was asked to come in and inject something into it, a bit more fire or whatever it was that I brought. And then we had those massive hits. So whoever was going to come in to replace Steve [Clark]’s part had to respect that.

AC: How does the songwriting dynamic with Vivian differ from when you were playing with Steve Clark?

PC: It’s a very different thing, because me and Steve, we were trying to create something that hadn’t been done before – guitar chord harmonies, almost like an orchestra of two guitars. A lot of rock bands with two players have a rhythm player and a lead player, and they’re both playing exactly the same until you get to the chorus, and then they still play the same. With us, we go, “Okay, let’s make something with harmony chords.”

One plays the rhythm for a few bars, and then it’s lead. It’s got a groove, it’s got harmonies, all this and that. But you’ve got to weave in and out of the vocals. That was something we created.

AC: I imagine it might have been difficult for Vivian to go from one-guitar bands like Dio and Whitesnake to a two-guitar band like Def Leppard.

PC: Maybe. I think the main thing with both bands you mentioned was very linear guitar playing. It’s not exactly involved from a songwriting or guitar playing point of view. You have rhythm guitar, then it’s a solo. But with us, it’s a lot more involved. You actually go, okay, I have to respect the vocal, and you have to respect the song. So that’s a very different type of thing altogether.

What was great with Vivian was you have such a great voice. When he came in, he was able to use that vocal thing. It was like, “Well, it’s not just guitar now. You have to actually sing on top of that.”

AC: A lot of older rock bands just use backing tracks or hire backup singers for the tour. The fact that you guys actually do your own backup vocals is impressive.

PC: It’s something we’re proud of, and only because we put all that hard work in over the years. It’s like, yeah, we want to feature that! Again, other bands are just lazy, especially rock bands. Now, when you hang out with some funk bands – and this is going back to that Earth, Wind & Fire thing – you stand on a stage with those guys and hear them actually do that.

Or even the Eagles, back in the day. That’s real singing. And then they’re playing these real songs that are amazing. And then, on top of that, it’s got this vibe and energy.

I find it very disheartening that there are bands out there who don’t have the chemistry, and they don’t work hard enough to make it better or add the vocals that will make the song better. They’re just out there trying to get paid or get a pension. 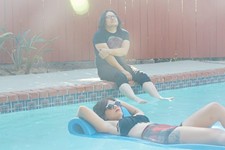 Next Up at SXSW: Ben Arthur
Web host finally showcases and panels up for March