You know where you are? You’re in Jerry World baby. You’re gonna die!

Don’t overlook the symbolism of that red flannel shirt knotted around the waistline of Axl Rose. For the mercurial frontman, the accessory hangs symbolic of his commitment to the Guns n’ Roses fan base. 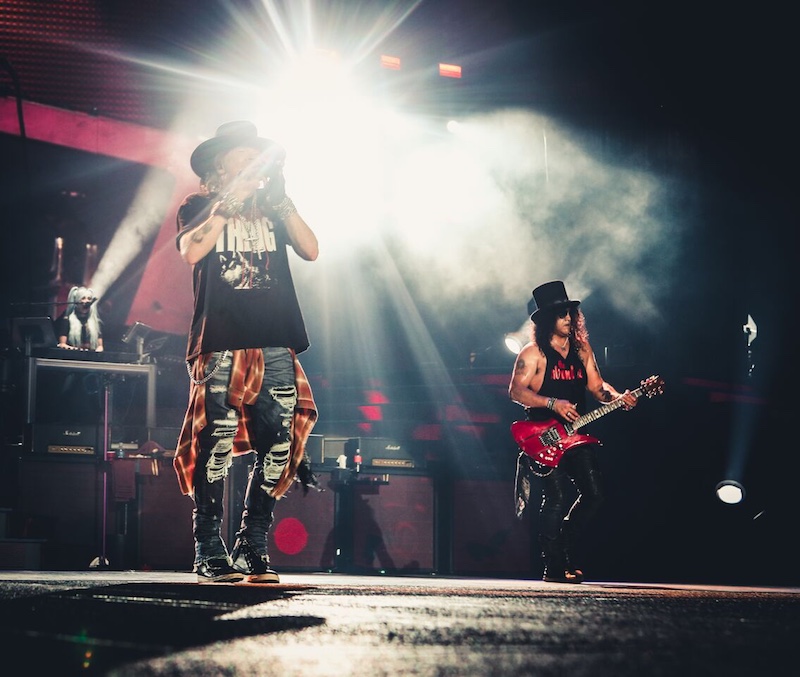 Of course the most important baggage he’s unpacked for the 36-date Not in This Lifetime Tour is core members Slash and Duff McKagan, who previously hadn’t shared a stage with Rose since 1993. Call it a nostalgia trip, but don’t overlook the masses' desire to hear songs played by the people who wrote them. This reunion – and the flannel nod to the onetime Hollywood quintet’s mid-Eighties ascension – is about giving people what they want.

In the two and a half hours between middle-finger opener “It’s So Easy” and encore-capping sing-along “Paradise City,” the frontman donned seven T-shirts, five hats, two flannels, three jackets, and half of one glove – all carefully designed to make him look like the Axl Rose of yesteryear. No atrocious red facial hair, cornrows, or blinding yellow suits crept onto the comparably fit rock star, who got his cardio workout by sprinting, snaking, and tossing around his purple mic stand to early set highlights “Mr. Brownstone” and “Welcome to the Jungle.”

Better still, his banshee howl has held up beyond expectation. A torrential shriek into his red-poof-ball microphone on the Paul McCartney-penned “Live & Let Die” brought down the house. Later, his machine gun prosody on “You Could Be Mine” and passionate delivery of highlight “Civil War” demonstrated that the 54-year-old Indiana native remains an inhuman vocalist. 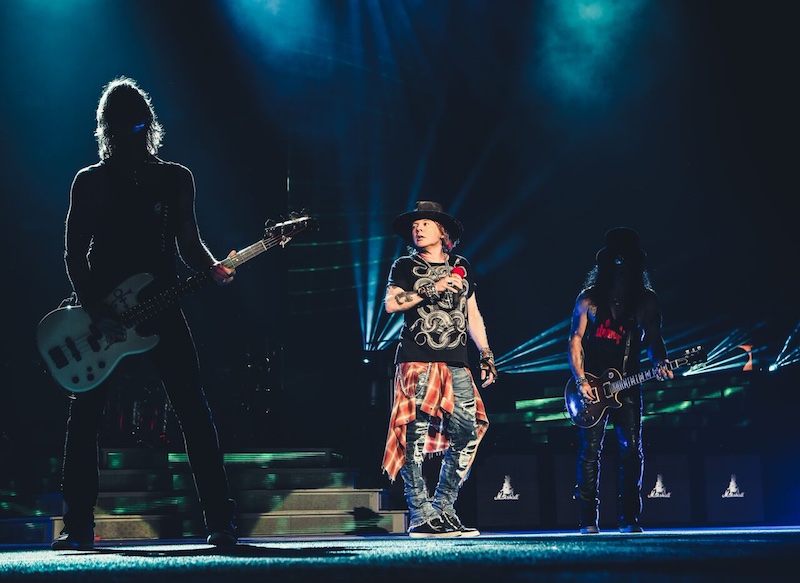 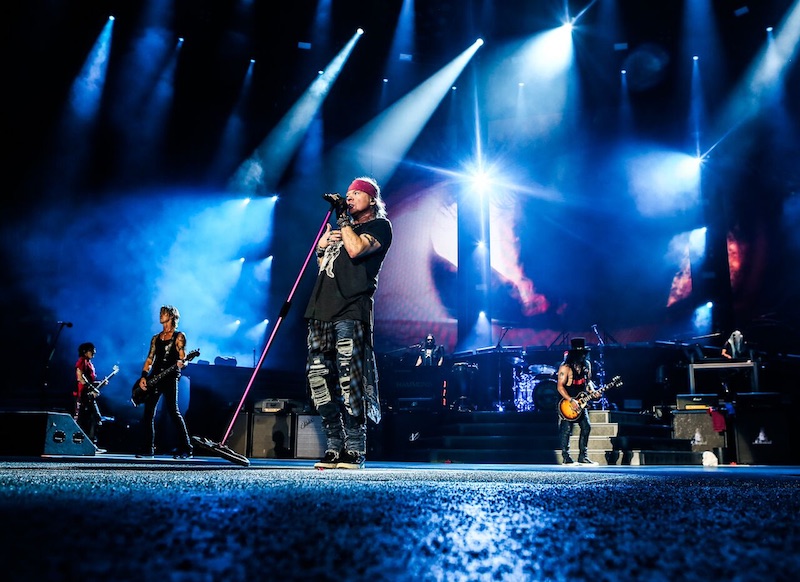 His bandmates got no shortage of the spotlight, either.

Slash, wielding his trademark Les Paul Goldtop, dazzled with a coruscating solo on “Double Talkin’ Jive,” then played guitar hero on a ridiculously melodic instrumental variation of Pink Floyd’s “Wish You Were Here.” Bassist McKagan, who looks like he drinks from the fountain of youth (probably health smoothies), overtook lead vocals on a cover of the Misfits’ “Attitude.”

Of the lesser-known members, Chinese Democracy axe man Richard Fortus may look the part of an Izzy Stradlin stand-in, but proved a phenomenal lead guitarist, stealing major moments on Wednesday, including a jaw-dropping solo on the 2008 album's title-track. G'N'R loyalist since 1990, Dizzy Reed and more recent addition Melissa Reese – who wears the second most makeup in the band... – both contributed keys and backing vocals. Drummer Frank Ferrer made everyone forget the name of Matt Sorum.

The midweek tour stopover wasn’t all roses, however. The set suffered from a flatlined version of Use Your Illusion 1 skipper “Coma” and several instances of overindulgence: Slash’s Frampton-esque talk box solo on “Rocket Queen” and the inclusion of excruciating piano ballad “This I Love,” one of four songs pulled from Axl’s rogue LP Chinese Democracy.

While the band began 30 minutes late, leaving the crowd wishing openers the Cult had played longer (Skrillex opens tonight’s Houston concert), a dangerously safe vibe looms over the Not in This Lifetime Tour, like every measure has been taken to make sure that things run smoothly and Axl doesn’t say the wrong thing. Yet caution doesn’t suit Rose and, for most of the show, he seemed emotionally tentative, lacking the fire-eyed egomania that he wears so well. Only at the end, when the band turned a corner via an epic crowd-participation version of “Knockin’ on Heaven’s Door” and drunken “Nightrain,” did the singer – by then dressed like Yosemite Sam in a gigantic cowboy hat – appear loose and in his element.

He then thrived in bonus time, finding his groove on ultimate highlight “Patience” and spirited Who cover “The Seeker.” When Slash’s guitar fell out of tune, Rose joked that it was his fault (“I put that in a special tuning for you”). At the end of stadium-made closer “Paradise City,” a confetti cannon covered the football coliseum’s enormous interior with red and white confetti as the band soaked in a Texas-sized send-off.

Crowd flowing out afterward, through halls decorated with old photographs of the city’s football heroes, a drunk man in a Dallas Cowboys shirt lost his composure.

“Fuck you, Jerry!” he slurred loudly with tears in his eyes, referencing the Cowboys’ billionaire owner Jerry Jones, as his friends tried to keep him upright. “Where’s our Super Bowl, Jerry? Where’s our fucking Super Bowl?”

That was the takeaway: No matter how much money you throw at something, you can’t always get what you want in life – unless you’re a fan of Guns n’ Roses in 2016. 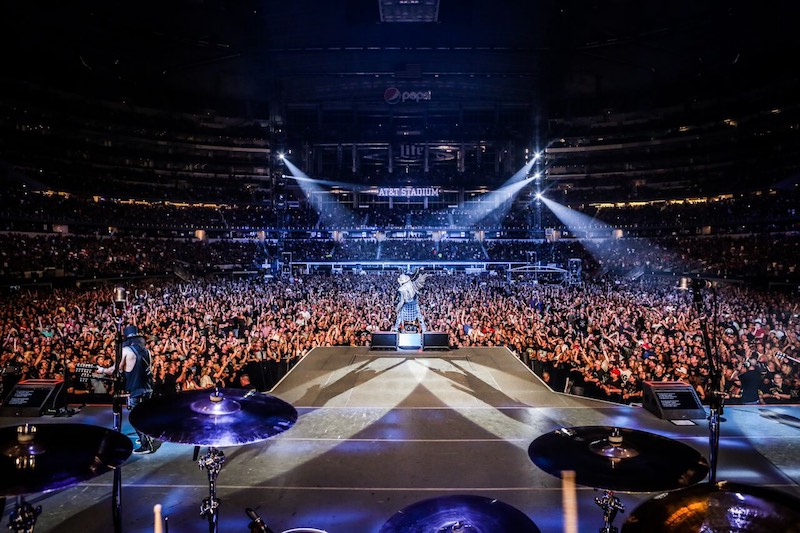 “It’s So Easy”
“Mr. Brownstone”
“Chinese Democracy”
“Welcome to the Jungle”
“Double Talkin’ Jive”
“Estranged”
“Live and Let Die”
“Rocket Queen”
“You Could Be Mine”
“Attitude” (w/ elements of “You Can’t Put Your Arms Around a Memory”)
“This I Love”
“Civil War”
“Coma”
Slash solo: “Speak Softly Love” (aka The Godfather theme)
“Sweet Child O’ Mine”
“Better”
“My Michelle”
“Wish You Were Here”/“Layla” (both instrumental)
“November Rain”
“Knockin’ on Heaven’s Door”
“Nightrain” 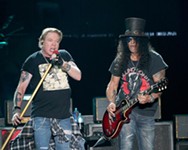