Latin hornographers’ second PBS taping pulls out all the stops

Neither floor, mezzanine, nor the balcony were full when Grupo Fantasma started taping its second Austin City Limits episode in a decade Tuesday night. ACL Live at the Moody Theater routinely crams indie rock acts with tenfold buzz into its PBS-loving arena. In the 75th minute, Austin’s Latino earthquake put them all to shame. 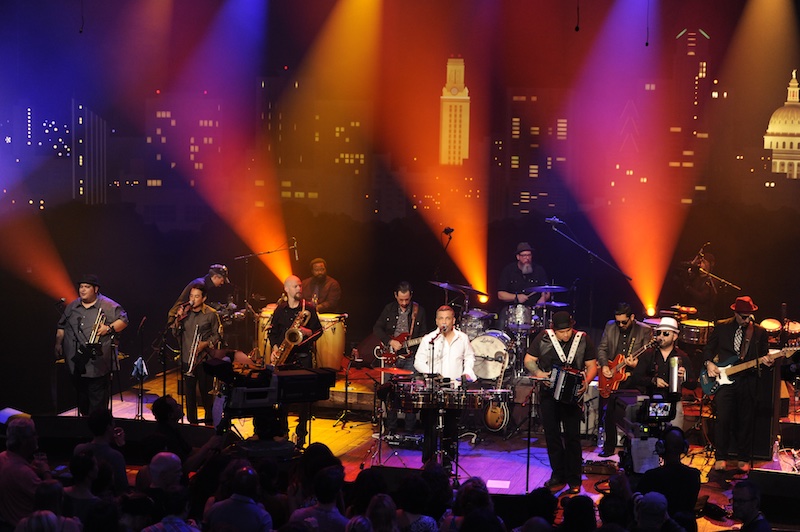 Photo by Scott Newton/Courtesy of KLRU-TV 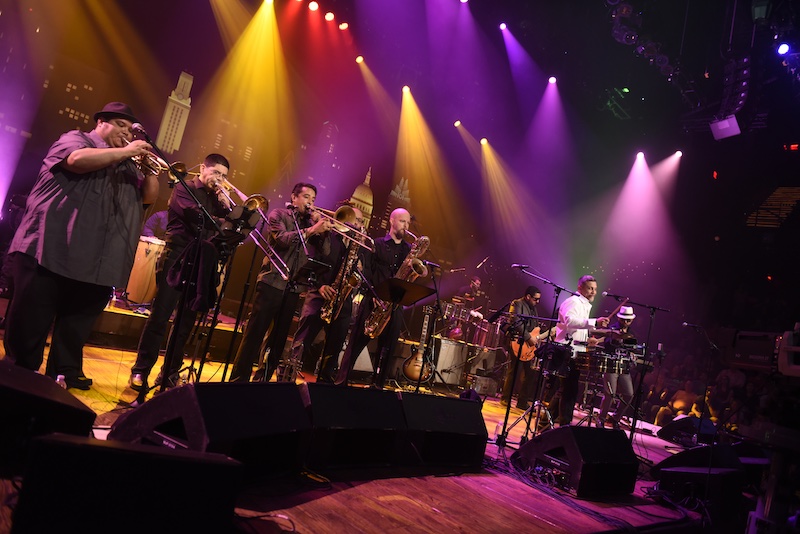 Thirty minutes later, after the stamp and clap command of “otra, otra, otra” had been fulfilled by the local Laredo natives, the bleachers finally stopped shaking and the temperature inside began to creep back down. Capping an expansive main set with more looks than Broadway, Prince cover “Controversy” nearly shook down the temple walls. Its all-hands-on-deck churn and burn tallied 19 musicians onstage.

Abdicated Grupo founder Adrian Quesada and free-roaming accompanist Josh Baca added another ax and accordion, respectively, to a fast-warming engine, quasar guitar pulsing atop a percussive onslaught held in check by dual frontmen Jose Galeano and Kino Esparza. The pair’s Spanish-language boom sounds like its emanating from a ride rumbling down Cesar Chavez after a pachanga. Music for the masses, the brown masses, a cantina mezcla of Texan, Mexican, and Afro-Caribbean beats and bleats crossing over to Anglo Austin.

“Roto el Corazón” (Broken Heart) breached at the aforementioned 75th minute with Josh Levy’s baritone sax blaring like a 18-wheeler, while the following “Problemas” broadcast Miami beach all the way to Havana – every riff a can opener, all cowbell blasts an exclamation, and the horn surges set to three-alarm. Argentina’s Los Fabulosos Cadillacs once taunted “El Matador” to such heights only they needed punk to do it. Standing ovation secured!

Prince once sought out Grupo Fantasma to back him. Perhaps that sums up their 16-year history in a sentence.

Grupo Fantasma’s Quinceañera
And you thought you had Problemas